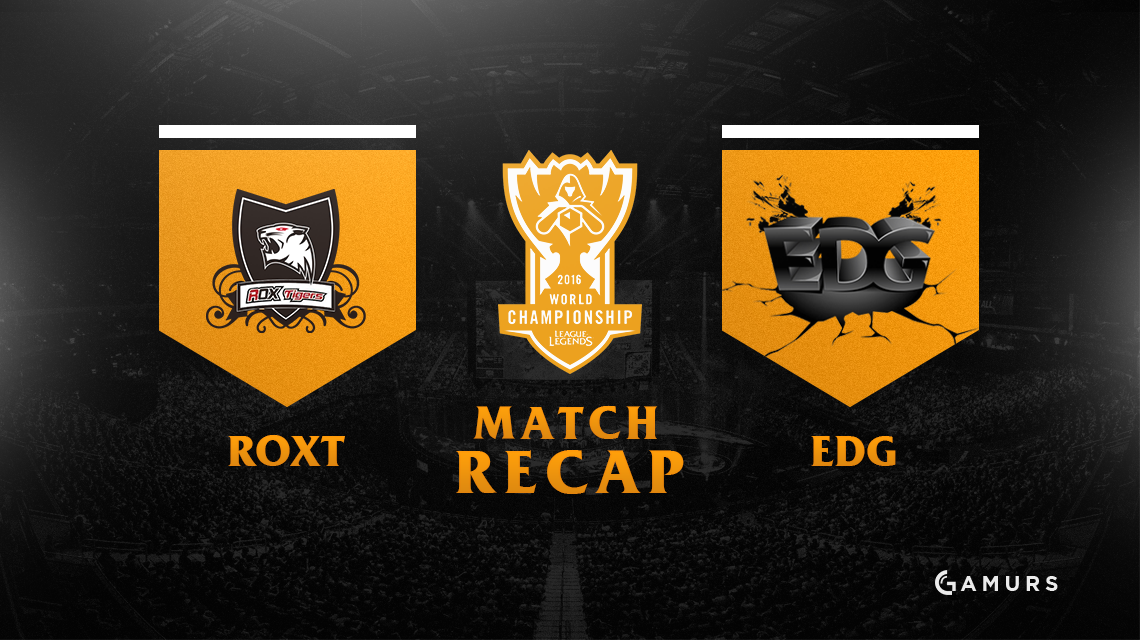 Today, ROX Tigers (LCK) faced off against EDward Gaming (LPL) in the third quarterfinals matchup for Worlds 2016. Here is a complete game-by-game breakdown of this series:

The first seven and half minutes of the game saw no kills and basically a very close, eventless game until EDG secured first blood in the top lane, which then led to a team fight bottom. The bot lane fight saw ROX pick up three members of EDG in a fight that was prolonged by the late arrival of ROX’s mid-laner Lee “Kuro” Seo-haeng. EDG also picked up one and made it a three-for-two fight still in favor of the Tigers.

ROX soon began to pull away, holding a very substantial gold lead, as well as leading in the turret score, taking down their fifth at the 25 minute mark. EDG struggled to find a grip on this match, which is understandable since they were behind about 6k gold.

The Tigers continued their domination into the late game, and with three mountain drakes, they easily destroyed the EDG base, holding the Chinese team to just four kills for the entire game.

Just like game one, the first kill of the game occurred seven minutes into the game, but unlike game one, this kill was not followed up by a prolonged team fight, and it was taken by the series leading ROX Tigers in game two. ROX wanted to try and take advantage of this early lead and begin to snowball the lead, but EDward Gaming was well aware of this and made smart plays to stay out of danger. While this was happening, ROX Tigers took the first tower of the game and extended their gold lead to about 3k 10 minutes into the game.

Right around the 20 minute mark, EDG looked to make Han “Peanut” Wang-ho pay for his aggressive play in their jungle, and at first they did, successfully taking down the jungler. But, soon enough, the rest of ROX arrived and made EDG pay for chasing their opponents into their own jungle, as all five members of EDG fell and ROX extended their lead to an even larger amount. At this point in the game, ROX now had a 10k gold lead and a 9-2 kill lead. EDG was also still looking for their first turret well past the 20-minute mark.

Twenty-three minutes into the game, ROX took Baron and turned right around to fight EDG, who were trying to harass them while taking the objective. The fight, like the rest of the game, went very much in favor of the LCK representatives, who took down four members of EDG, while the LPL representatives picked off just one member of the Tigers. From there, it only took one more push down the bottom lane and one more five kill fight for ROX Tigers for them to go up by two games in this series, ending the game with a kill lead of 18-4.

ROX found first blood for the second game in a row, and started off their gold lead early. The Tigers wanted to solidify this early lead, but soon started forcing things that should not have been forced. Thanks to several safe plays from EDG, the Chinese team was able to prevent too bad of a snowball. EDG focused on the top lane and actually gained most of their early game traction there.

EDG soon turned this top lane advantage into an advantage all around the map, securing their first gold lead in the past two games around the 10-minute mark. Just like ROX Tigers did to EDG in the first two games, EDG snowballed the game all the way to their opponent’s Nexus, taking just about all of the objectives in their path.

The action in this game broke out first in the bottom lane when Peanut, using the Olaf ultimate, charged into the lane and opened up the game with a first blood triple. This was followed up by a Kennen teleport that helped secure ROX’s four kills in just the one team fight, while EDG was only able to find one. Peanut, who was now 3-0, was soon back in the bottom lane, where thanks to the Curtain Call from Jhin, he secured his fourth kill of the game, putting ROX firmly in control.

This game seemed very reminiscent of game two, where once ROX had won the early game, EDG had no response and struggled heavily to play from behind. At 26 minutes, ROX had taken both dragons and four towers, compared to EDG’s two.

ROX used a Baron buff to begin to poke down parts of the EDG base around 25-30 minutes into the game, preparing for a final push that came just a few minutes later in the top lane.

With this victory, ROX secured their spot in the semifinals, where they will play against SKT. On the other hand, EDG was eliminated from Worlds with a top-eight finish.