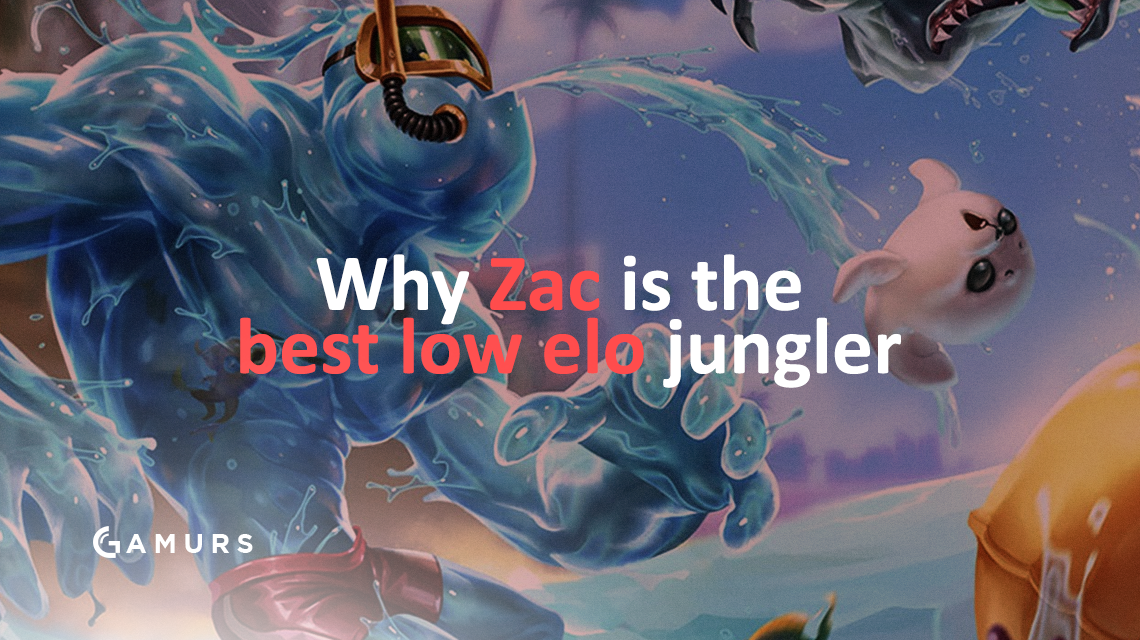 Most of the people who I play League of Legends with are better than me, and are higher ranks than me. Thus, I think I have the right to say what is best for the low elo level in League of Legends because I have spent so much time in it. When I play with these higher ranked friends, I can choose between two champions to play in the jungle: Gragas or Zac. This is because they know me, and they know that I do not like to play the champions I’m good at; I prefer to play the champions that I will probably end up losing with, mainly because I get bored of the champions I’m good with. I can comfortably call myself a Zac and Gragas main, but thanks to nerfs to Gragas, Zac has become my go-to champion. So, I have come to the realization that he his one of, if-not the best, champions for low elo junglers.

We will start by going from left to right through Zac’s abilities, starting with his passive. Zac’s passive, “Cell Division,” acts like two different abilities. The main ability that will be taken advantage of when clearing the jungle is the blobs that split off Zac when he uses an ability on an enemy champion or neutral jungle monster. These blobs last for six seconds and when Zac walks over to them, they merge back into Zac and he restores four percent of his maximum health. This is key for low elo junglers who sometimes struggle with clearing the jungle without using things like pots or having to back.

The second half of Zac’s passive occurs when he dies. When Zac is taken down, his body splits into four different blobs, similar to those that split when he uses abilities. These blobs will move to a center blob, and if at least one of them gets to the center without being destroyed, Zac will respawn with anywhere from 10-50 percent of his maximum health, depending on how many blobs make it the center without being destroyed.

This passive can sometimes act as a get-out-of-jail-free card. For example, you engage a fight, but get focused down and die. But, your team has backed you up and pushed the enemy team away from where you died, thus making it impossible for the enemy team to destroy your passive, which gives you a second life and the ability to get back into the fight. It can be very powerful if it works the way you want it to, and is a key part of Zac’s kit.

Zac’s Q, “Stretching Strike,” is an ability where his arms fly out in front of his body in a straight line. If it hits an enemy champion or jungle monster, it deals magic damage and applies a slow that lasts for two seconds. This slow is key for the jungler when he or she is ganking. Zac can use his E, which we will touch on later, to engage and use his Q to slow down the targeted champion, which is an immense help when securing a kill while ganking.

Zac’s W, “Unstable Matter,” is another ability that is great when clearing the jungle. When used Zac’s body bursts outward, he deals magic damage to all enemy champions and monsters 360 degrees around him. This is a great ability when clearing raptors, for example, because damage can be done to all four raptors at the same time. The cooldown time of Unstable Matter can be reduced when Zac picks up the blobs mentioned in the first part of Zac’s passive, meaning this ability can be used more often, thus more damage being dealt to the jungle monsters.

Zac’s E, “Elastic Slingshot,” is key for his ganks. When the player presses E, a cone shows up on the screen in the area where the player’s mouse was. A bar fills up and the player can slingshot Zac anywhere the bar has filled up to. As this skill is leveled up, the distance Zac can fly to is increased. This is a great engage tool for ganks, and I have even seen several people, myself included, use this to fly over dragon or Baron and smite it while in mid-air, landing on the other side.

Finally, Zac’s ultimate is “Let’s Bounce!” or as I like to call it, “Press R for crowd control.” When used, Zac bounces around four times, gaining movement speed as he does. He deals damage to any enemy champion he hits, and that champion is thrown in the direction Zac is moving. This ultimate is very powerful when the enemy team is grouped together. If Zac can get back there and pop his ultimate, he deals a tremendous amount of crowd control and disrupts the enemy team. If it is used right, the ultimate can be used to single out and focus down the damage dealers of the enemy team, making the team fight that much easier for Zac’s team to win.

Perhaps the most important thing about all of these abilities, and one thing they all have in common, is their relative simplicity. Zac is all-around not a hard champion to play; once you play one or two games with him, you start to figure out his kit, and how he likes to be played. I heard a piece of advice a few months ago, “most bronze games are not decided by who makes better plays, but rather by who makes less mistakes.” Very often, players new to the game will want to jump to the champions played by the pros, like Lee Sin and Nidalee. These champions are hard to master and new players will make a lot of mistakes when playing them. A lot of mistakes is the main factor in teams losing games and getting frustrated.

Someone new to the jungle position will have little trouble clearing the jungle with Zac. He is an inherently tanky champion and his passive, which reduces the cooldown on his main damage dealing spell, is great to have when you need to take down the jungle monsters as efficiently as possible.

Team Fighting and Ganking With Zac

With Zac, you will almost always be building tank, and catering your items depending on the game you are in (whether or not armor or magic resist is needed, for example). Because you are the tank, it is your job to absorb or soak up the damage dealt by the powerful champions on the other side. You need to be the one initiating the fight and the one being focused on. This can be done because Zac’s tankiness enables him to do so, and his passive, which we talked about earlier, provides a second chance after he dies. Even if you do die because you went in first, your team should be there to back you up. The other team may get one kill on you, but your team could ace the opposing side, which makes your sacrifice worth it.

Zac’s ganks are some of my favorite, and are some of the easiest to pull off once you get the hang of it. The pattern goes like this: use Zac’s E to engage and fly-in with the element of surprise. At this point, the target will do one of two things: back up or flash back. If he flashes, weigh the option and see if you can get the kill if you use your flash. But, if you force a flash out of the him, and you only used your skill, which is on a much shorter cooldown, that is worth it. Just make sure to be back for a gank before the target gets flash black. If the E lands on the target, use your Q to slow them and you have to deal some damage. From there, the laners should be able to clean up the kill. If you need to, you could also consider using your ultimate once you hit level six.

If you are new to the jungle position or even League of Legends in general, I highly suggest you check out Zac as an extremely viable option in the jungle. His simple skill set is friendly enough to new players using it, and harsh on enemy champions on Summoner’s Rift. That, along with the points I brought up earlier, is why Zac is the best low elo jungler in the game.

Do you agree that Zac is the best low elo jungler in the game? Let us know by commenting below or tweeting us @GAMURScom.