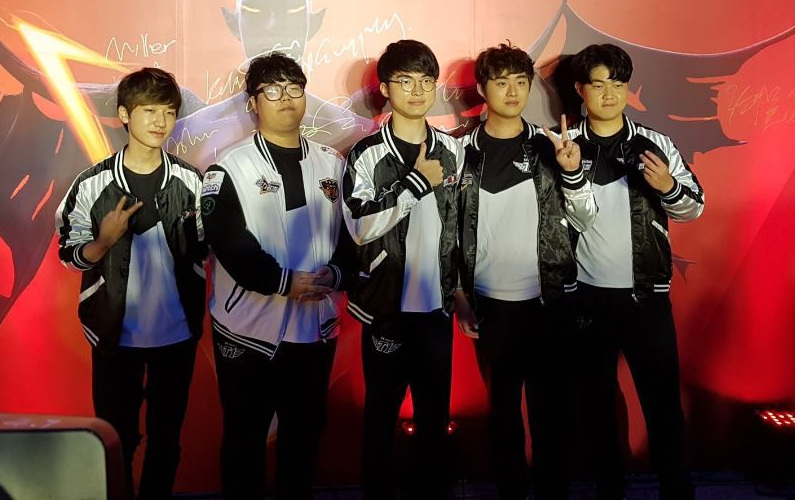 In game four of the 2016 Worlds semifinals, SK Telecom T1 were up against the ropes.

That’s when legendary SKT coach Kim “kkOma” Jung-gyun pulled a rabbit out of his hat. Banning Miss Fortune away from GorillA was the easy decision. But bringing in substitute Bae “Bengi” Seong-woong for Kang “Blank” Sun-gu was a risk. The MF ban meant SKT left a power pick, Nidalee, on the board. Rather than handing her over to ROX jungler Han “Peanut” Wang-ho, kkOma had Bengi pick her. So it was that Bengi went into SKT’s biggest game of the season with a champion he had never before played on stage. Talk about rolling the dice.

The throw came up sixes—Bengi dominated the game. His Nidalee found kill after kill in the middle lane and successfully escalated the pace of the game. The move was hailed as masterful.

Heading to China for this year’s Worlds, kkOma will face a similar, but unique challenge. But this time, he’ll have a decision to make before the games even begin. Because of Riot’s rules, each Worlds team can carry only one regular substitute. SKT has four good players—junglers Peanut and Blank and top laners Heo “Huni” Seung-hoon and Ui “Untara” Jin-Park—and only three eligible roster spots.

It’s a good problem to have, but a problem nonetheless. Who should the team put on the Worlds roster?

At the start the year, the popular and effervescent Huni started in top lane. But when the team went on an uncharacteristic losing streak in the middle of the LCK Summer Split, the team turned to the more stable, but less known. Then, after Untara led the team to the LCK Final, Huni was subbed back in when SKT fell down 0-2 to Longzhu in the first two games.

Huni’s reappearance against Longzhu led to increased speculation that he might be on the Worlds roster. This week, as the official SKT Twitter page started posting photos of the team in China, with surefire starters Faker, ADC Bae “Bang” Jun-sik, and support Lee “Wolf” Jae-wan. But Huni and Peanut were there, too.

It’s tough to read too much into those posts. SKT may just be highlighting Huni and Peanut as the more famous players. Untara and Blank are with the team in China, based on their scrim schedules. But the photos are interesting—could they mean that, after a split spent largely on the shelf, kkOma is going back to Huni as his top lane starter?

Huni is the more aggressive player, and sometimes that gets him into trouble. Both he and Untara players are weak to early ganks as both tend to push aggressively, even without vision. But Huni’s mistakes can snowball out of control as he tries again and again to take back control, while Untara can stabilize.

Huni dispelled some of the memes about his inability—or unwillingness—to play tanks in the Spring Split. But this summer, he’s gone back to playing aggressive split pushers. In theory, Huni can give SKT two strong solo lanes that demand attention. And while his teleport play is overzealous, it should be remembered that last year’s top laner, Lee “Duke” Ho-seong was also heavily criticized for his teleport play early on, before solidifying over the season. If Huni can choose his spots more wisely, he gives SKT another advantage in the late game.

In that way, Huni raises SKT’s ceiling. The team is better with him playing well than with Untara. But they also have a lower floor.

Peanut was the other lauded player to join SKT last offseason. The question going in was whether SKT could tame the mercurial young jungler and help him play safer. In some ways it’s worked—most notably in the Spring Finals against rivals KT Rolster.

He’s been the starting jungler in most series SKT’s played this summer, but with a quick hook. His two losses to KT in the LCK semifinals weren’t really his fault—Bang getting caught was a bigger issue. And Blank didn’t do much better against Longzhu after Peanut was pulled following the first game.

The strange thing about Peanut is, in the process of learning SKT’s style, he’s given up a lot of his own. For whatever reason, he’s been a much less aggressive jungler this summer. SKT’s strong lanes usually lead to him control over the jungle, which helps him with creative early invades. But he’s not turning his experience lead into kills for his laners.

Peanut has no doubt learned a lot this year, but it doesn’t look like he’s as comfortable as he was last year with ROX.

Blank made a lot of waves this year with his incredible 20-game win streak. For a while, it looked like any time kkOma subbed Blank in, magic would happen.

The way Blank did this was by protecting Faker. When all else failed, when either Huni or Untara would die, and the bot lane would cede pressure just trying to survive, SKT would put everything on Faker. As he is wont to do, Faker usually delivered. But even the best player in League needs help from the team, so it was often Blank’s job to ward for Faker and show mid over and over.

Blank did a great job assuring SKT of their Worlds seed by saving the day against KT in the reverse sweep. But he couldn’t pull off the same magic against Longzhu. Longzhu saw Blank’s gameplan and focused everywhere else, especially in the top lane with Kim “Khan” Dong-ha. Khan may be the best top laner in the world at this point, and the same is true of LZ ADC Kim “PraY” Jong-in. But losing two lanes without jungle help is brutal at the highest level.

Blank locks SKT into a mid-centric playstyle. In some matches, SKT has lived with that predictable style, comfortable that they’ll execute better. But SKT has won Worlds before with Faker playing supportive champions, like Lulu, that seek to support the other lanes. Their ceiling is higher when kkOma has multiple options, and against the best teams at Worlds, they may need more flexibility than what Blank can provide.

Untara is yin to Huni’s yang, someone who can stabilize after an early deficit. SKT seem okay with Untara’s stable of tanks and, of course, his favored Rumble. Watching SKT, they’re more in-sync at times, more patient with Untara.

The problem is he’s just not as good a player as Huni. The difference is larger than that between the two junglers. Untara was thoroughly dismantled by Khan in the LCK Final, while Huni was at least able to poke Khan down with Gnar.

Would SKT opt into an inferior player just for safety? Or should they go for it because, you know, it’s Worlds?

It’s anyone’s guess what the final roster looks like, and kkOma obviously knows his team much better than anyone else. But there may be one last consideration that has nothing to do with any of the four players.

Faker recovered into dominant form for the playoffs after an indifferent start to the Summer Split. But Bang and Wolf have taken a small, but perceptible, step back this split. SKT still boasts one of the strongest bot lanes in the World, but at times, they’ve been susceptible to dying in lane. And at moments against KT and LZ in the LCK playoffs, Bang was outplayed by the opposing ADC. It was a key game one party in the bot lane, won by Longzhu, that set the tone for the entire series.

How does that impact the sub decision for jungle and top? Well, having two junglers gives kkOma more options for how he wants to play the map. In a meta where coordinated roaming and engage from both support and jungler is so important, kkOma may want as many jungle options as possible. The question then is which top laner to leave off the roster. Huni is more apt to join for parties in the bot lane, but Untara is better at absorbing pressure and letting the rest of the team pick up slack bot side.

On the flip side, opting into Untara means SKT is choosing to play with the worse player. Sure, Huni’s appearance against LZ was in a desperate situation, but SKT at its best has been with Huni and Peanut. Both are pretty comfortable helping the bot side. If kkOma believes he can trust these two, it could be a mix of Untara and Huni with Blank serving as a mentor—but from the bench.

KkOma has a good problem—too many solid players. The ultimate decision is still up in the air, and it may not be until the Group Stage starts at Oct. 5 in Wuhan, China that we find out the final roster. It wouldn’t be surprising in the least to see any combination of these four players at Worlds.