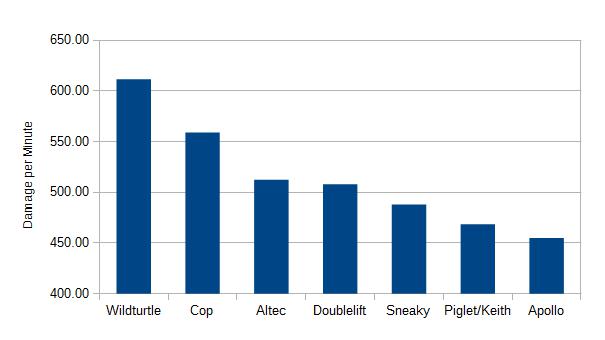 Follow up article on damage to champion statistics, this time for NA adcs over the half-split of games.

Why damage to champions? I personally feel it is the most important stat for and adc – says so in their name. Carry the game by doing damage with auto-attacks. Seems simple enough.
Based on feedback, people seem to misinterpret this – meant as a conversation starter and supporting facts, not all of the the analysis necessary to judge players. Unfortunately, there is only so much information in Riot’s post match statistics page.

Now this sort of analysis does make adcs on teams that fight a lot look better. It would be best to include a structure damage + dragon/baron damage stat for teams that rotate around fights, but that doesn’t exist currently (rito pls). We’ll go through the stats quick and then do some evaluations at the end. I included 7 of the 10 players, ignoring the bottom three teams. That gets rid of some of the bottom dwellers. I also combined Team Liquids two adcs (Keith/Piglet) as one data point, as neither have played enough games individually for good stats.

First stat we will look at is damage per minute. I don’t like just looking at total damage, as it is skewed by teams that play longer games. So we normalize the total damage stat by dividing by game time.

Wildturtle and Cop really shine is this stat, dealing 100 dmg/min and 50 dmg/min more than the group of Doublelift and Altec. We could be seeing the rotational style of CLG and C9 showing, with Sneaky and Doublelift lacking the opportunity to deal champion damage.

Again led by Wildturtle and Cop, but the middle positions changed. But very little difference in terms of absolute values between everyone else – all in the 1.2 – 1.25 range.

Next is % of team damage – we look at this because it is far more variant than it was for EU.

Sneaky leads the way here; doing over a third of his teams damage. The top 5 are close, in the 30% – 34% range. Doublelift and especially Apollo are comparatively low. One thing to note is that Doublelift’s 28% of team damage would put him 3rd in EU on a similiar graph. This may be a supporting fact for the claim that NA is more adc focused, while EU still revolves around mid.

Sneaky looks really good in this, and Doublelift/Apollo really bad. This means that Sneaky recieves far less gold than he maybe should, based on his team damage contribution. Conversely, the gold invested in Doublelift and Apollo really doesn’t pay off.

Lets conclude with notes on specific adcs (random order)
Wildturtle – Does lots of damage. Maybe gets lots of money, but based on his damage output he uses it well. We can assume he benefits from playing with Bjergsen, and is focused less than some of his counterparts. But does what he is supposed to do when looking over whole split.
Doublelift – Looks bad in these. Gets lots of money but doesn’t bring it out in the form of damage. That said, CLG may be still living under their old coaches world view and rotating over fighting.
Sneaky – Does a high portion of his teams damage. Looks bad in the total damage statistics but normalizing by team makes him look better (which was not the case with Doublelift). From this we could say that if C9 is having problems, Sneaky is not one of them.
Cop – Looks really good from these statistics. Permanently second. Often critized for just being consistent and avoiding flashy plays, but that maybe better than some of these other players.
Apollo – Low damage output, both as a percentage of team and total. But he also receives less gold than some of his counterparts, and performs well when comparing damage dealt to income.
Piglet/Keith – Average to below average. Not enough data to really seperate the two. And this data doesn’t prove or disprove the theory that adc is Liquid’s problem; teams have had success in the past with average play from their adc.
Altec – Does good damage, gets lots of gold. These statistics really don’t pass a lot of judgement on his play.