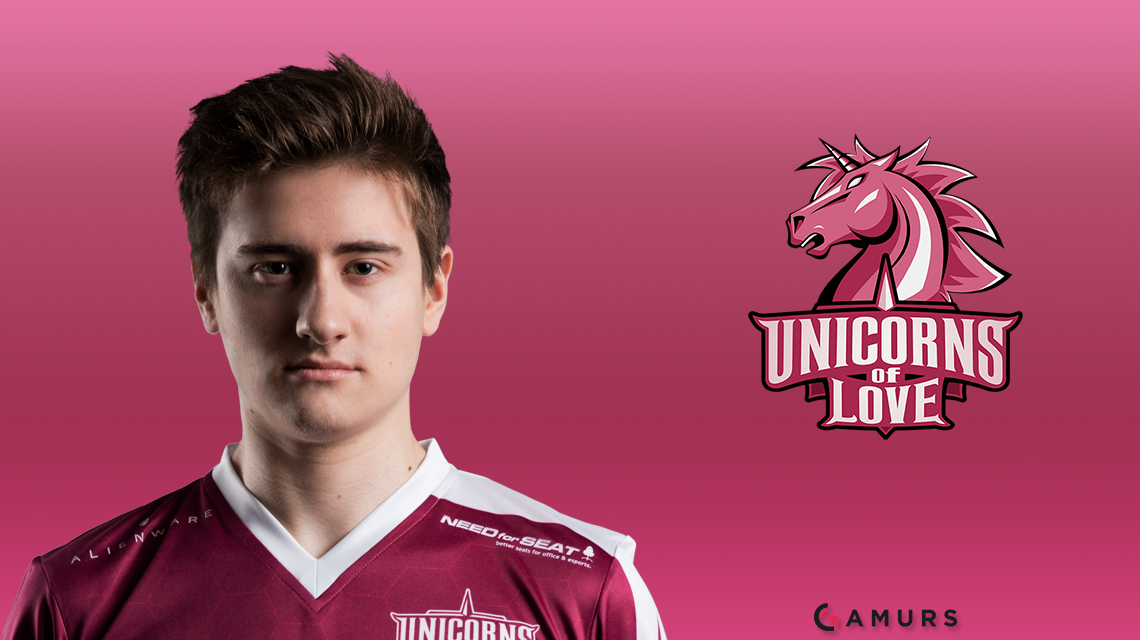 Image via Unicorns of Love

We had the chance to talk with one of Europe’s best mid laners, Fabian “Exileh” Schubert, from the Unicorns of Love. We talked about himself, his team and their success at IEM, as well as what the future holds for them.

Exileh: “Yes, right now, I’m playing for the Unicorns of Love. I’m 19 years old and I’m from Germany, as you said. I’ve been playing competitive League of Legends for quite a while actually, but I started playing LCS about half a year ago, maybe a bit more than that. And that’s kinda my big story.”

Does your nickname have any special meaning or significance? How did you come up with it?

Exileh: “The nickname kinda came out of the blue. The story behind it isn’t too special. Back then, when I was playing World of Warcraft when I was younger, I couldn’t really choose a name for my character. So I just went to a name generator machine on the internet and this was the first name that came up and I really liked it, so I just took it.”

You have been a part of some very famous organizations so far. How did that all start for you?

Exileh: “At the start, it was basically that I went to the top of the ladder, like top 30, top 40. At one point, I just got in contact with someone, I believe my first team was ESC Gaming. We played our first international tournament, that worked out well, and after this, it just kept going with these offers and finally I arrived here.”

What is your favorite champion and why?

Exileh: “My favorite [champion] right now is probably Corki. For me, it’s not like I have a consistent favorite hero; I like to play champions that fascinate me in some way. I feel like Corki is doing really well in the current meta and I enjoy playing him a lot. I feel like the champion has a lot of potential and is funny to any matchup and that’s why I like the champion a lot.”

You are in charge of making some changes in League of Legends. What would you change?

Exileh: “I think League right now is in a really good spot like in terms of balance overall. I feel like Riot is doing a really good job with balancing the game overall. What I dislike, sometimes, is the philosophy behind the champions; for example, what a champion is supposed to do and what the champion can do. I feel like when a new champion comes out, it can do a bit too much and this is a big part that I think I would change myself. In my opinion, if there are like 120 champions that are only good in certain areas and then the others left can do more than this, then this is a bit unbalanced in some way and I dislike this.”

You have become a top tier mid in EU. What do you still have to work on? What matchups do you look forward to?

Exileh: “I think that the main thing I am concerned of now, like in terms of learning and focusing on now, is trading of ward and laning phase, because when I look back, I feel I had troubles overall. When I have matchups that are supposed to be easy, sometimes I struggle because my trading is not that good compared to other mid laners. I play well with my team and I think it is a big step if I learn how to trade well and snowball the lane.”

How much did UoL’s win at IEM help you in this split?

Exileh: “I think it’s a pretty big deal that we won IEM because of course it gave us a lot of confidence as a team. We were doing really well as a team internationally, and this is something that we had always been asking ourselves; how good are we compared to international teams, like NA? You see different meta picks, and you know, that makes you wonder: are they ahead of us in the current meta? Or maybe, [they are] behind and that will benefit us when we meet them? I think IEM is a really good example that we believed that we did really well, so this gave us confidence going into the split, knowing that we are a really strong team that can win against anyone basically. This is what motivates us.”

You also won the G-Fuel MVP award. How did that feel?

Exileh: “This was actually an awesome feeling, because when I look back at the stats from the summer split, I was doing really poorly. I was probably the worst mid laner in the EU at that time, and I feel like my entire team helped me improve, and I think that I helped them carry this over to some degree, and getting rewarded was something that felt really nice.”

What are your goals for League of Legends this year?

Exileh: “When you want to compete against other players in a competitive area, there are plenty of areas that a player can improve. If you focus on all at once, it’s not going to help you a lot because it is too overwhelming; it’s way too much. You can’t improve anything within like a week. I think the best way is to cut the game down into certain brackets, like trading, positioning, team-fight control, macro-play in general and work on those small areas one after another. It doesn’t matter where you start, it just matters that you start and get into it. This is really important actually.”

Exileh: “This would probably be with chicken, tomato, cheese… Probably a bit of salad as well and I guess that’s it actually. I like it simple.”

When will you dye your hair pink again?

Exileh: “I wasn’t planning to do it but I would be up to do it if my team does it as well. Maybe I could convince them one day that we should dye them pink. I don’t think it’s going to be soon but we’ll see in the future. But probably we will, when we are all happy at the end of the split.”

You are a castaway on a remote, isolated island. You have to choose one League of Legends personality to help you survive. Who would it be?

Exileh: “This is actually a really tough question. I’m actually not sure who it would be. Well, I would probably choose Romaine, you’ve seen him sometimes on stage as well. He just has a lot of experience in life and I think he would be the best person to know how to survive in the wilderness, or on an island. If it was a hero, I don’t know, maybe someone who just has a knife? So that we can cut stuff.”

Okay, I think we can wrap it up. Any final shoutouts?

Exileh: “Yeah, shoutout to all our fans that support us and watch our games. Also, to my family and my friends that cheer for me every week. It’s really awesome, thanks.”

Do you think Exileh and the Unicorns of Love can win the EU LCS this split? Let us know by tweeting us @GAMURScom.