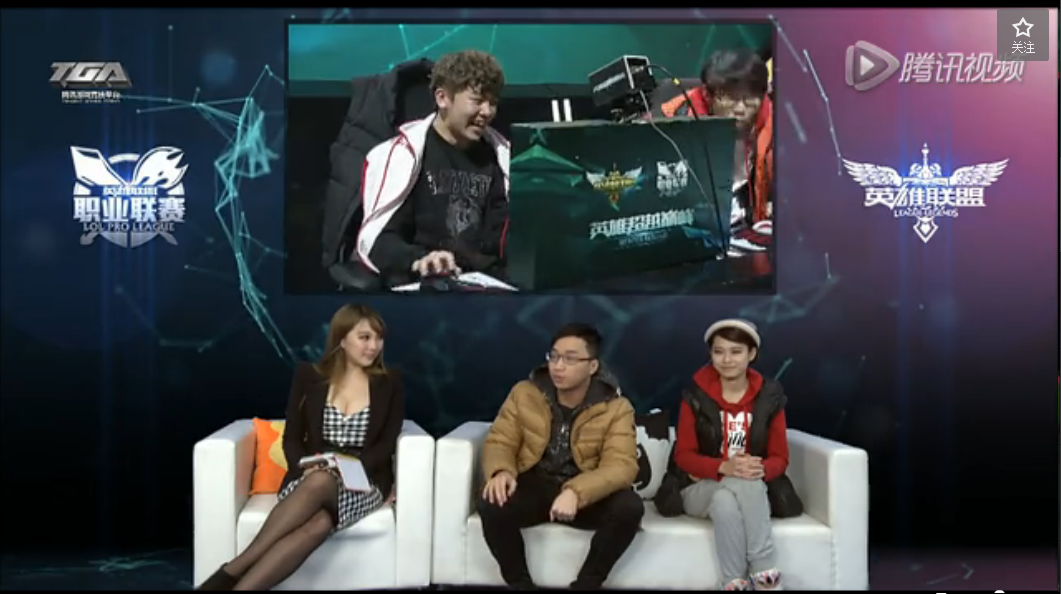 (Tabe MIA. The running gag is he fell in the toilet)

Hostess 1: Do you think Kryst4l doesn’t look as good as before?

Hostess 2: He likes to use flashy champions like Draven. I think he stopped pulling out the Draven to avoid being predictable and get target banned.

Hostess 1: He started to use Kalista now that everyone else is using her. Also one of his favourite picks, Tristana, isn’t as strong the post re-work.

Hostess 2: Teams used to always have to ban Tristana against Snake. Kryst4l and Flandre often carried Snake by themselves. If WE wants to win, they have to rely on Spirit. Styz is looking good but I would give the edge to Kryst4l. It also puts Spirit in a tough place. Kryst4l plays the lane very aggressively and demands the attention of the enemy jungler, but you can’t really leave Flandre alone at top either.

Hostess 2: Chinese servers usually don’t keep up with the latest patch. This patch still has the OP Veigar. WE target bans Azir and Xerath for Baka. He usually sticks with these two champions. I think he can pick Lissandra.

Hostess 2: And a rare bot lane duo of Lucian+Morgana for WE. Viktor for Snake, a pick that has recently increased in win rate.

Tabe: So I had dinner with Styz a few days ago. I asked him how are things right now. He said not much. But today I learned a secret. When every other team was taking it easy during the New Year holidays, everyone on team WE was doing secret training. I confronted Sytz with this information, he smiled and said that they just had a shorter vacation. I don’t know what other teams did; I only talked to Styz because we are close.

Hostess 2: I heard OMG also returned to Shanghai (Headquarters) early from their vacation.

Tabe: Ya I know Uzi did.

Tabe: I am very happy that my good friend Styz won. If he wins again, I want to give him a red envelope with at least ¥131 and 40 cents.

Tabe: Anyway, I thought Spirit played very well in the previous game, whether it was catching Viktor out of position, or zoning Snake’s backline and escaping with only 100 hp. Although Jarvan doesn’t provide a lot of damage, he excels at escaping and zoning. I think Ninja played very well too. The Korean players are just so good with their synergy. Last game’s MVP belonged to Ninja based on his KDA, but my MVP is Spirit.

Tabe: Not sure if you guys know this, but the Taiwanese casters openly challenged WE (Chinese team) at IEM. They said if WE wins, they will shave their heads. I feel very angry when these casters are trying to mock the Chinese teams, because they are in turn mocking of me. I found it funny that they would attempt to mock the only Chinese team at IEM because aside from TPA, all of their teams are bad enough to have their heads shaved in a bet. I think once the WE players heard this news, they would have tremendous motivation to do well at IEM.

Tabe: WE is really strategic when it comes to P&B. They banned two of Baka’s main champions and Viktor to mess with his performance. It doesn’t matter how good Baka is on Viktor, Ninja is like “I am 10-0 but I will still ban your Viktor!” Basically he is implying whatever Baka picks, he will counterpick.

Tabe: Lulu mid is not as strong early after her “E” ability rework. Now that Leblanc is not countered by Lulu any more in lane, WE can pick the Leblanc.

Hostess 1: Looks like Snake is going back to “protect the ADC” comp. with Lulu.

Tabe: Krys4l picked Kog’maw. I really, really like the Kog pick because of the two offensive and defensive shields from Lulu and Morgana. Kog would be very hard to kill if he gets ulted by Lulu on top of these shields. I don’t think Snake would lane swap Mundo to give Kog a safe lane, because Mundo counters Maokai pretty hard. But Janna+Graves have the early advantage against Morgana+Kog.

Tabe: Congrats to Lulu for stacking a total of 60% CDR! All she is missing is a Nashor’s tooth to reach 85% CDR! I told you guys the Kog’maw pick is so good. The Kog for Snake’s comp. was “Paint the dragon, dot the eyes” (Chinese idiom for adding the finishing touch). With Kog, Snake transformed into a dragon. Snake should rename their team Dragon, and their secondary team Snake(dot)Dragon. (The joke is Chinese teams usually name their secondary teams with an extra dot, e.g. WE.A)

Tabe: But honestly, viewers please do not copy Kryst4l’s build because it’s not very good. The best build should be BotRK into Infinity Edge, and finish with Phantom Dancer. Static Shiv’s magic damage is only good early game, that’s why most Tristana players buy a BF sword but then build a Shiv for that early game spike. But PD has that extra 10% crit over Shiv, which is starting to become popular in place of Shiv in the early game after the PD crit rework.

Tabe: Ya but it also has ignore minion collision. It’s so good on Kog because when he blows up in his passive, he can chase people down and not get minion blocked!

Hostess 1: Maybe pro players have their own ways of thinking?

Tabe: (Jokingly) I don’t care, he was wrong! But Kryst4l performed well, especially his damage output. Snake protected Kryst4l very well. OMG should be copying this now they have Uzi.

Hostess 1: Tabe are you familiar with both teams?

Tabe: I am really close with all of OMG’s team members. They all came to my birthday party.

Hostess 1: What about VG?

Tabe: I am really close Vasilli, and also Hetong and carry. Speaking of Gogoing, honestly he has a lot of female fans. Long time ago everyone thought he was a Vietnamese who illegally immigrated to China. I feel recently Gogoing has polished his appearance/fashion a lot better.

Hostess 1: Wasn’t there an accident when a female fan tried to forcefully kiss him?

Tabe: To all the female fans, next time just kiss him. He liked it, he desired it. Gogoing is single…

Hostess 2: No! There were picture leaks of his girlfriend in the past.

Tabe: Really? Well I don’t know. But the Gogoing I know is a hard working man that practice 20 hours a day.

Hostess 2: Cool is hands down the best mid laner in China right now. Statistically speaking, he is way above any other mid laners. And here we see two bans (Ahri/Leblanc) for Cool. He still has the TF pick, but last time he got solo killed by PawN’s Nidalee. He was still useful after the laning phase though. OMG bans Nidalee, there we go.

Hostess 1: The Nidalee ban could be for DanDy or Hetong. I remember meeting Carry (VG’s top laner) last year in LPL and telling him that I admired his play.

Tabe: Ya he plays really well, but not as strong as Gogoing.

Hostess 1: I think DanDy is really handsome. I met him in the dressing room before the match, and I really wanted to tell him how handsome he is but I didn’t get the chance.

Tabe: If DanDy hadn’t won Worlds, would you still think he is handsome? What if he is just a pedestrian?

Hostess 1: I just think his appearance is handsome. When I was casting with Weixiao and Fzzf, I told Weixiao that he looks similar to DanDy. Fzzf said nope, Weixiao is more handsome.

Tabe: So basically everybody on OMG is handsome.

Hostess 1: Vasili is really handsome too.

Tabe: Wow Kog’maw instant lock! I think Uzi was listening to our cast, picking a “protect the ADC comp”.

Hostess 1: I feel like all the players right now are all more handsome than your generation, Tabe.

Tabe: Of course, they have makeup.

Hostess 1: Cloud is so hot!

Tabe: You want his WeChat (Chinese messenger)? I have his WeChat.

Hostess 2: Zed pick for Cool. I think OMG is trying to add some damage to their comp. It was done in the past to create an extra threat when playing with Kog in the backline.

Tabe: But Rumble counters Kog very hard. He just have to land his ultimate on top of Kog during a team fight. And top lane Lulu cannot scale as well as mid lane Lulu. She might fall behind on AP items.

Tabe: On a side note, players with longer fingers have the advantage because they can cover multiple keys at the same time. That’s why Vasili is so good. When he went to America, the American female fans had much higher standards for “length”.

Hostess 1: I think San should go to America to “develop”.

Tabe: Ya and I should go to Africa to “develop”. Female fans in Africa have the highest standards in the world for “length”. I feel like my potential in China is wasted.

Hostess 1: Congrats to VG for easily taking the game after dominating the entire game.

Tabe: I really wanted to criticize the Zed pick from Cool, but I didn’t because I believed in him. Despite his poor performance this game, I still think he is the best mid laner in China. Maybe a female fan told him before the game “??Please show me your Zed??”. Maybe an important person wanted him to play Zed and he obliged.

Hostess 1: Is that really possible?

Hostess 2: Of course it is! Didn’t you know that’s how he successfully chased his girlfriend?

Tabe: How could you not know? Cool did it on the champion Fizz back when nobody played the champion because it had short range. The story was she liked him because he was so good on Fizz, and they duo’d a lot.

Hostess 1: So basically you pro players get a lot of girls with your leet skills. How about you Tabe?

Hostess 2: The next game is starting soon…

Tabe: OMG first bans Azir to give Cool more space to operate. He can play Kassadin in mid without too much pressure.

Hostess 1: I think Hetong was the MVP on Azir last game.

Tabe: How do they pick MVP? And how many people are voting?

Hostess 1: They look at team contributions and KDA. Not many people vote though.

Tabe: VG picks so fast without thinking. I think DanDy is going Hecarim jungle. I feel like VG has too much magic damage. Ah Carry’s Riven! The AD damage VG needs. Riven counters Kassadin, and Carry’s Riven is famous. OMG could lane swap though. The Shy (WE’s streamer) also plays a strong Riven. I heard he is only 14.

Tabe: Cool should really review his recent plays. His team fighting is ok, but early laning has some issues. I think VG had a good chance to win. Hetong played well early. They messed up hard in that Baron fight. Corki also outdamaged Graves.

Tabe: VG’s scaling wasn’t very good. They were up 5-6k gold heading into the Baron fight, but they messed up hard. Three points to take away: 1. Give more resources to Uzi because he can carry 2. Cool should review his play 3. VG should think about how they can keep their lead.