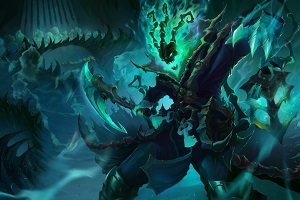 Thresh, much like Lee Sin, is extremely hard to play and use effectively. Many scenarios you will be put in as a Thresh player are very hard to approach, understand and react to. Now while the essence of playing champions such as Thresh and Lee Sin is fun, it probably isn’t an effective way to stably climb the ladder. I’m going to explain exactly why this is, and what champions you should be playing instead in order to climb.

Thresh naturally loses most of the meta matchups that he finds himself in right now – Janna , Sona and Nami are all great picks into Thresh. A player such as BunnyFuFuu from Curse Academy isn’t going to care about these match-ups as his proficiency with the champion is so vast that he can create situations that will work out in his favour, most commonly these situations are lane swaps and gank set-ups. These things mainly work due to BunnyFuFuu having highly skilled team-mates to co-ordinate with. In your average silver, gold or platinum game you are unlikely to have team-mates who can fully abuse your ability to set up ganks and you’re definitely not going to have a well done lane swap. With this being the case, you are likely to be forced into a standard 2v2 in which your only hope of winning the matchup is for the enemy support to misplay. If they don’t then you are likely going to find yourself pushed in to your tower with no potions left.

Lastshadow once gave an amazing explanation of why lower ELO players shouldn’t play zed. In a crudely drawn diagram on paint he applied a number to the champion, or a skill ceiling as I believe he called it. I’m going to describe his example but change Zed to Thresh. So if Thresh has a skill ceiling of 100. A player such as Madlife (in his prime) would probably be at around 97-99. If we go down the scale, A challenger thresh main would be at, let’s say 80. Now if we jump down to the average player, who will be somewhere within Silver to gold, their number would likely be around 20.

To empahsise my point we’re going to use the same scale on another popular support, Janna. Janna is played at all level of gameplay much like Thresh, so when we look at her skill ceiling (Similarly at 100) we can imagine an extremely good player such as Xpecial playing her at around 97-99, a challenger player around 90 and our average joe would be around 40 – 50. As you can see, this is double that of Thresh. With Janna’s kit being far easier to utilize and use effectively, picking Thresh over Janna or other simple yet effective champions such as Sona or Nami seems counterproductive if you want to have as much impact as possible and win your games, right?

To conclude, while Thresh is a strong and unique champion and I’m sure people at all ELO bracket’s have some form of success with him, he is far from optimal unless you have the skill to fully utilize his kit and maximize the efficiency of his abilities, compare this to simpler supports such as Janna, Nami and Sona, and there is really no contest. If you want to have a high impact and win more games, pick a champion that can easily have that high impact without requiring as much mechanical skill.