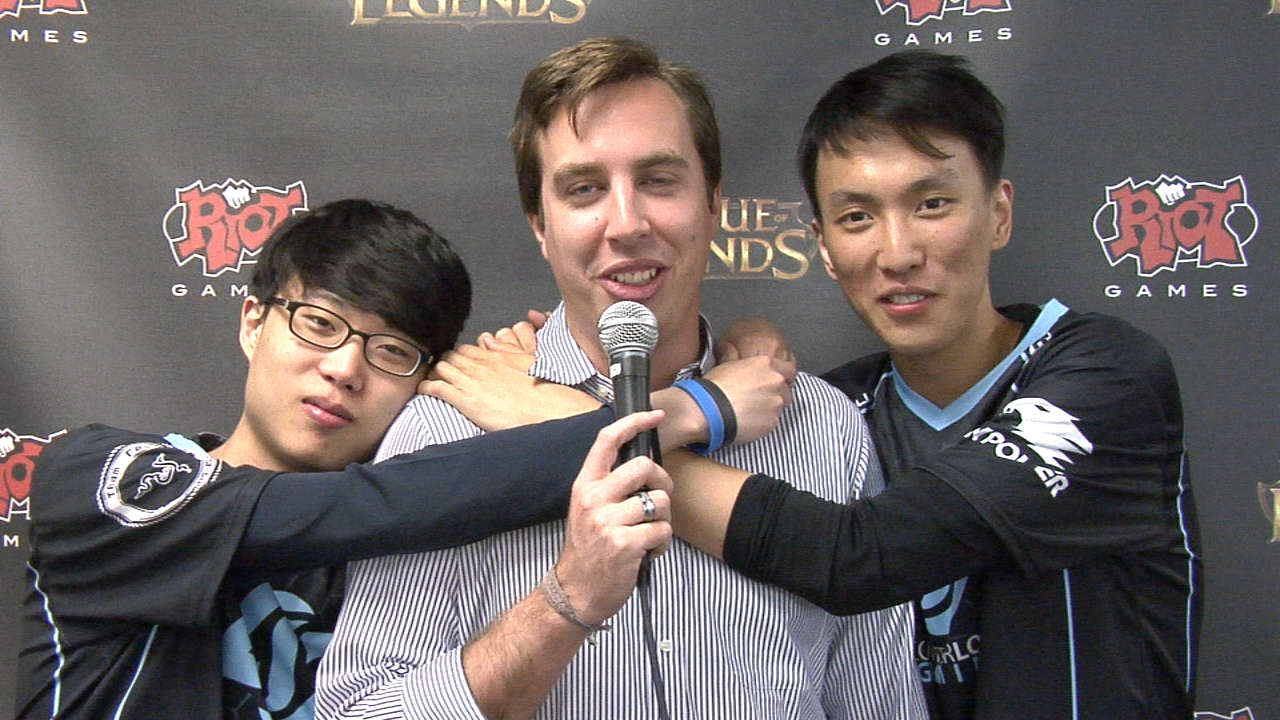 Heading into the next week of the North American League Championship Series (LCS), the most popular storyline will be the clash between Team EnVyUs and Team SoloMid. Under normal circumstances, a match between two teams with a combined 11-1 win record will already attract the attention of all serious NA LCS fans. However, EnVyUs vs. TSM is considered special due to the rivalry between Shin “Seraph” Wu-Yeong and Yiliang “Doublelift” Peng, two of the most popular players on their respective teams. In addition, this will be the first match between both players where they are on even footing, as Seraph’s previous two matches against Doublelift saw Seraph playing on a team destined for relegations against Doublelift’s finals-bound Counter Logic Gaming and TSM rosters.

With their best-of-three match just around the corner, both players have taken shots at each other during interviews, and the LCS broadcast has once again brought up the Seraph-Doublelift storyline. The community is also excitedly looking forwards to the matchup. In a time when most professional players are very friendly and respectful to each other, the sometimes open disdain between these two players can be a breath of fresh air and a reminder that the LCS is a fierce competition.

But although the EnVyUs vs. TSM match this weekend has all the makings for an exciting rivalry, the personal rivalry between Seraph and Doublelift has been poorly framed over the last two years. Every time these two rivals face off, only a single storyline is brought up: that Doublelift “bullied” Seraph when they both played on CLG and held him back from his full carry potential. While there is truth to this story, this narrative is both caught in the past and unfairly skewed towards Seraph’s side of the story, to the detriment of Doublelift, CLG as an organization, and Seraph’s teammates.

In reality, the clash between the two players is much more interesting and nuanced. This article will discuss the history of Seraph vs. Doublelift and the unique circumstances of this LCS split in an attempt to provide richer context for this weekend’s matchup.

The Young vs. the Old

When fans think of Seraph’s time on CLG, they think of the team’s disappointing finish to the season. After being swept out of the playoffs against an underdog Team Curse, CLG was nearly relegated by their sister team, Curse Academy. Shortly before the team’s disappointing playoffs finish, Seraph had publically complained that his team was not giving him enough resources, and that they were sacrificing him rather than allowing him to carry.

In particular, he complained that the team was giving up too many resources to the AD position. These facts have largely framed the narrative of Seraph’s rivalry with Doublelift. Seraph’s fans believe that CLG would have been a much more successful team if they made Seraph the primary carry rather than Doublelift. Even more moderate voices, such as those on the LCS broadcast, have pointed to CLG’s failures as a sign that they were not spending enough time getting Seraph involved. On all of Seraph’s future teams, Challenger and LCS casters alike have contrasted his freedom with the restrictions CLG placed on his playstyle.

But even though this is an easy storyline, it is one that ignores context. When looking at CLG’s season holistically, a different story emerges. While it is true that Seraph was forced to play a utility role, the buffs to tank champions and teleport meant that all top laners, not just Seraph, had to focus on enabling their teammates rather than carrying themselves. In addition, the buffs towards AD Carry items, particularly Infinity Edge, meant that prioritizing the bot lane was actually a strategy employed by the majority of top teams worldwide. Indeed, the Season 4 World Finals featured a battle between Samsung White and Royal Club, two teams with very low econ top laners and hard carry ADC players. Compared to Jang “Looper” Hyeong-seok and Jiang “Cola” Nan, Seraph was actually afforded a larger amount of his team’s resources and was allowed to pick champions that were more damage-focused, such as Shyvana.

In addition, CLG was one of the most successful teams in the league when Seraph played a low econ role. Doublelift was feared as one of the most dangerous ADC players in Season 4, and he had a proven track record of carry performances, even alongside Seraph. Accusing Doublelift of selfishly “starving” Seraph is just as ridiculous as blaming Seraph for the failures of his undertalented Challenger teammates. For the vast majority of the split, the team was in first place, until interpersonal disagreements (initially brought on by Seraph’s desire for more resources) destroyed the team’s synergy. Although the dominant Seraph vs. Doublelift narrative focuses on how Doublelift’s poor personal skills destroyed the pair’s relationship, it could just as easily be argued that Seraph’s selfishness pushed a once promising CLG lineup towards failure.

A better history of Doublelift vs. Seraph will take both sides of the story into account. In many ways, Seraph was a younger version of Doublelift when he joined CLG in Season 4. Both were young, mechanically talented players who gave up everything to join a legendary North American organization (Doublelift ran away from home, and Seraph left his home country of Korea to move to America). However, they were at different stages of their career when they played together. Seraph was still trying to prove himself as an up-and-coming star, and his love of carry champions such as Nidalee and Yasuo were a very poor fit for a CLG team that was trying to win the title. Doublelift was an older player trying to secure his legacy by winning his first LAN.

Although he was objectively a much better player than Seraph at the time (and proved his abilities as a primary carry by winning a title only a year later in the summer of Season 5), his lack of understanding and unwillingness to help his teammates grow as players did play a large role in CLG’s issues, as evidenced by his removal from the team even after he helped them win a title. A better description of Seraph and Doublelift’s past is not a one-sided story about “bullying.” It takes into account the position of both players in their careers and acknowledges that while the two future rivals had talent, their strong personalities and different career stages doomed their partnership to failure.

The “bullying” storyline naturally leads to discussion about how Seraph is finally on a team where he can be the main carry. In fact, some fans may try and view this weekend’s match as a referendum on whether or not CLG should have let Seraph be the primary carry two years ago. Sadly, this storyline disregards both Seraph’s personal growth as well as the talents of his teammates.

Although Seraph’s fans frequently bill him as a top lane damage carry in the same vein as players such as Lee “Flame” Ho-Jong or Gao “Gogoing” Di-Ping, the reality is that Seraph’s ideal role (and his role on EnVyUs) is actually shockingly similar to his role when he was seeing the most success on CLG. Seraph usually plays a combination of engage champions and off-meta damage dealers and places a heavy focus on split-pushing. Ironically, his primary role on EnVyUs is not to deal the majority of the team’s damage. In fact, his job is to distract his opponents and open up room for his teammates to take objectives, a role shockingly similar to what he did on CLG when he complained about being sacrificied.

After leaving CLG, Seraph took a winding path before returning to this role. On some of his Challenger teams (or the Team Dragon Knights sub team) his teammates were simply too poor for him to be anything other than the primary carry. At other times, he picked low-utility damage carries even when he had players better suited to dealing damage, such as Noh “Ninja” Geon-woo, Kim “Emperor” Jin-hyun, and Oh “Ohq” Gyu-min. On those teams, Seraph suffered the consequences, going 3-6 with his full TDK team in the LCS and placing a measly third besides ohq in the NA Challenger scene. On this EnVyUs team, Seraph has embraced the role of enabling his teammates while also displaying formidable individual growth, further developing his already-strong dueling and teleport usage.

On the other side, Doublelift has also taken a much lower econ role since joining TSM, leaving the lion’s share of farm to solo-laners Søren “Bjergsen” Bjerg and Kevin “Hauntzer” Yarnell. This match will not be a referendum on who should have carried Season 4 CLG. This match is about two players who have historically struggled with teamwork embracing team-oriented roles when supported by teammates they love and trust. To say otherwise would be disrespectful to the tremendous growth in teamplay both players have experienced over the last two years.