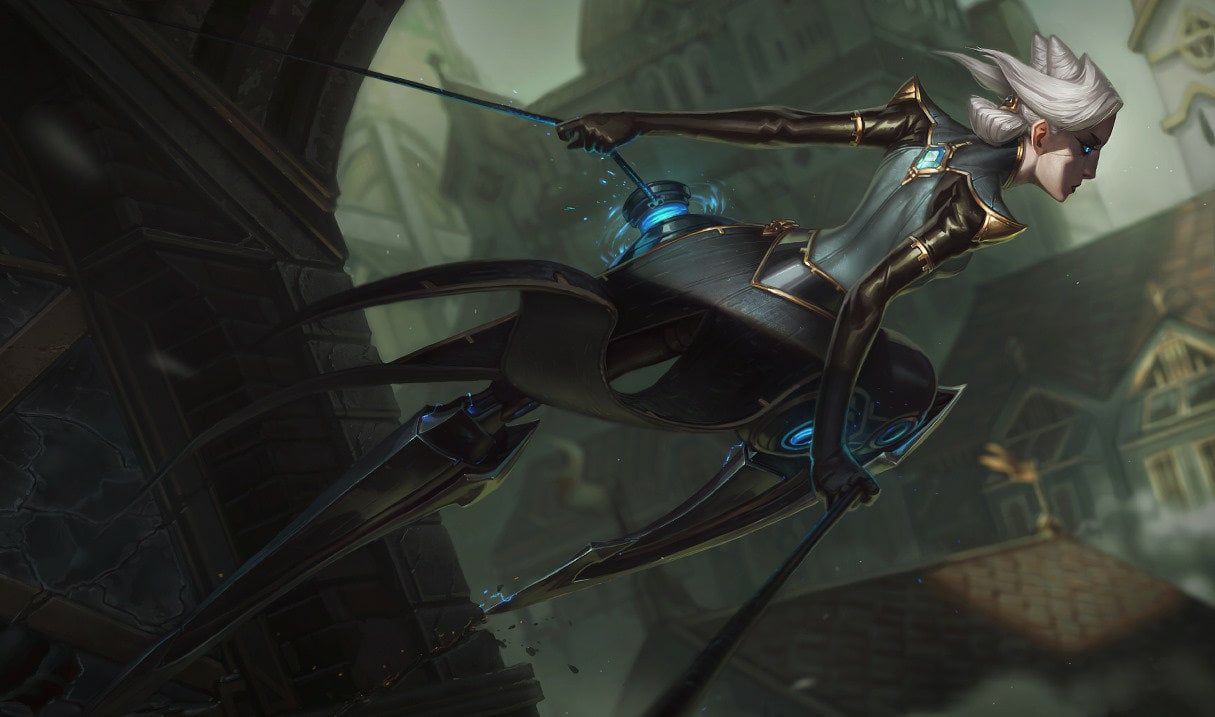 Camille has remained as one of the most popular top laners in League of Legends over multiple seasons. The champion boasts a number of strengths and relatively few weaknesses. If she makes it through the ban phase, it’s likely that either top laner will pick her up.

Riot Games designed Camille to be a late-game carry due to her true damage conversion. But over time after rune and item changes, she transitioned to an early-game menace as well. She’s tough to shut down and can punish immobile champions due to her low cooldown dash.

As with all League champions, specific items are going to be more effective depending on the circumstances of the match. But there are certain items that will work well on Camille in the majority of situations. These items and runes are going to ensure that you have the best possible chances of winning with this champion.

Grasp of the Undying: Grasp of the Undying is one of the smartest choice a player can make when selecting runes on Camille. With it, they will gain additional base health, bonus health when they damage an enemy, and increased damage. It’s vital for Camille in both the early and late game.

Shield Bash: Camille has a unique passive ability, which makes her gain a shield every couple of seconds when she damages opponents with basic attacks. Thus, having Shield Bash will improve the influence of those shields, making you deal more damage after gaining a shield. It’s great for trading early and for increasing your threat as time goes on.

Bone Plating: As Camille, players should aim to come down from the top lane victorious after triumphing over an enemy in a few skirmishes or trades. To decrease the damage you take, it’s smart to pick Bone Plating.

Unflinching: This champion usually targets enemy squishies in the late game. This, however, may not be as easy as it sounds. To enhance your chances of reaching your destination, you should go for Unflinching, which provides you with additional tenacity and slow resistance.

Magical Footwear: As Camille, you want to be as fast and mobile as you can, and with Magical Footwear, you’ll have an extra 10 movement speed. Plus, you don’t really want to be spending gold on shoes early on, so you’re going to save yourself an investment.

Biscuit Delivery: Trading is one of the pivotal elements of playing top lane. Therefore, to give yourself some chances to replenish health and mana early on, it’s great to pick Biscuit Delivery.

To have a perfect start on Camille, it’s best to go for Doran’s Blade in most circumstances. This item enhances your early game potential, both in trading and in clearing minion waves. By boosting your health, players will also have a little more sustain, which can be pivotal before you hit level six.

During the laning phase, players will most likely engage in trading and early skirmishes, which will lower your health significantly. To have a small form of backup, having a health potion and buying some more with your first recalls back to the base is essential.

In League of Legends, mythic items are crucial, Without it built as one of your first items, champions are pretty much useless since the mythic item grants your other legendary items additional stats. And for Camille, in most cases, there is no better option than Divine Sunderer.

It significantly improves your major stats by providing 20 ability haste, 35 attack damage, and 400 health. But, more importantly, Divine Sunderer comes with a special passive ability, with which you will deal more damage after using an ability. This aspect, combined with your Q and Camille’s kit overall, will come in handy throughout the course of the game. This item also grants your other legendary items five percent armor and magic penetration, which can make a difference when trying to shred through enemy carries.

Camille is more of a fighter than a bruiser, therefore you want to prioritize aggressive items while playing her. Thus, after constructing your mythic item, it’s time to go for Ravenous Hydra. It will decrease your cooldowns on abilities, grant you a bit of Omnivamp, and increase your attack damage by 65. Additionally, Ravenous Hydra makes your basic attacks deal AoE damage, which is perfect for clearing waves and split pushing, which are tasks that will sometimes fall on your back.

In today’s meta, players will often find themselves playing against AD-based composition. So, to lower the incoming damage, Plated Steelcaps is a wise choice. If you find yourself in a losing matchup, there’s nothing wrong with purchasing the item immediately after getting your Magical Footwear, since they will enhance your chances of surviving the early game.

Sterak’s Gage is probably one of the best items on AD-based fighters and bruisers, and it’s for a good reason. It comes with 50 attack damage and 400 health, which on its own is a strong addition to your champion. Furthermore, it has two unique passives. One of them will allow you to heal after dealing damage to an enemy or taking it from him. The second one, though, works similarly to Immortal Shieldbow. Once players with Sterak’s Gage are reduced below 30 percent of their maximum health, they gain a shield that absorbs some damage for a couple of seconds. In game-deciding teamfights, this can make a tremendous difference.

And since we’re talking late-game teamfights, there is probably no better item when facing AD-based compositions than Guardian Angel. And even if the opponents have one or two ability power-dealing champions, it’s still sensible to pick it.

In the mid to late game, players should avoid getting caught out of position, since most of the time, having to brawl in a four-versus-five scenario usually means a lost fight. But, with Guardian Angel behind your belt, you have a second life every five minutes.

In the end, Camille is an aggressive champion, who as we mentioned before, wants to find herself behind enemy lines and slaughter the enemy carries. And, regarding that aspect of the gameplay, it’s tough to find a better item than Death’s Dance.

It’s one of the best offensive-oriented items in the game, which, besides boosting your stats, comes along with a mitigation effect. This, alongside your other items like Sterak’s Gage and Guardian Angel, will make Camille quite hard to get rid of. Additionally, once you score a takedown, you heal for 15 percent of your maximum health over two seconds.

Plated Steelcaps will most likely be your standard pick, but sometimes it’s better to swap them for Mercury’s Threads. They can’t you magic resistance, which can make a huge difference when you’re playing against mages, as well as 30 tenacity.

Trinity Force is a sensible option in terms of mythic items on Camille. It has similar passives and statistics to Divine Sunderer, although it trades some health for additional attack speed. Trinity Force should be picked in instances when you feel like you need to attack faster and have problems with closing the gap between you and your opponents. On top of that, it will give your legendary items bonus attack damage, ability haste, and movement speed.

While Ravenous Hydra is a more aggressive pick, Titanic Hydra comes in as a boost to your defense. Instead of a significant increase to your attack damage, ability haste, and omni vamp, Titanic Hydra provides 500 extra health. Thus, it’s best to pick this item when aiming for a more safe build.

Maw of Malmortius is probably one of the better choices for champions like Camille when you find yourself in a game where you desperately need magic resistance and additional shields when taking magic damage. So, if you’re against three or more AP-based heroes, don’t hesitate to pick it up.

With so many healing abilities in the game and champions like Soraka or Sona being quite popular lately, Chempunk Chainsword’s pick rate has also been on the rise. If you find yourself playing Camille in a game against many healers, make sure to buy this item to decrease your opponents’ healing potential by applying Grevious Wounds.

Sometimes as Camille, you’re going to be put on split-pushing duty. In matches like these, you definitely need to purchase Hullbreaker, which is an item made for these instances. With it in your inventory, you will deal more damage to towers and improve your damage against minions.

Found yourself in a game where you are the greatest threat to enemies and keep getting focused? To remove the crowd control, purchase Silvermere Dawn, which has an active ability that helps in sticky situations.

It’s very rare nowadays to spot tanky items on Camille, but sometimes you have to do what you have to do, especially against AD comps. With Thornmail, you will get 60 armor, and 350 health, and will deflect some AD damage that comes your way.

Spirit Visage is the best option to go for once you need a defensive item against an AP-based squad. This item also works with Camille’s passive ability, since it increases the received shielding by 25 percent.

Randuin’s Omen can save Camille’s life. Out of the three defensive items listed here, this is the most defensive-oriented. Its passive, similarly to Death’s Dance, has a mitigation effect, while its active ability will make you slow down enemies surrounding you.