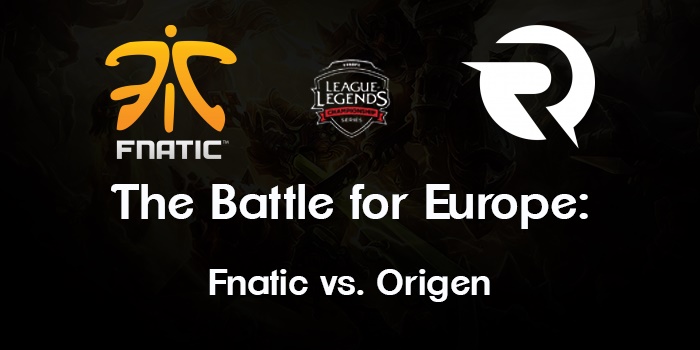 Fnatic vs. Origen: it’s the most compelling match of the 2015 Summer Split so far. There are several big storylines to follow, each worthy of an article unto itself:

These storylines are well laid out by Deficio in his piece on lolesports.com, but I want to explore a different angle. Let’s set the storylines aside and ask the real question:

How do these powerhouse teams stack up?

To do that, we’re going to review some key statistics from the first three weeks of the Summer Split, comparing role by role to see where each team has an advantage. These stats won’t tell the whole story, but they’ll form the basis of the comparisons.

(If you disagree with the numbers, let me know, and leave a comment explaining why! Discussion and debate are always welcome.)

Soaz hasn’t needed to shoulder as much of his team’s damage-output burden as Huni, playing more of a facilitator role. Soaz has the most assists (56) of any EU Top (compare to Huni’s 44). Huni has taken more of the game into own hands, with Europe’s second-highest average damage share for a Top laner (compared to Soaz in seventh). Let’s keep that in perspective, though: Soaz is still doing the fourth-highest average damage per minute of EU Top laners.

Fnatic relies heavily on Huni, but Soaz is a good candidate to limit the lovable Korean’s impact. The question is whether a potential laning advantage for Soaz can actually slow down Huni’s ability to rampage through the mid and late game.

Advantage: Too Close to Call

Reignover has been showing a major preference for the Void Burrower lately, and putting up big numbers. But Amazing is right there with him, dealing plenty of damage and participating in almost three quarters of his team’s kills. Offensively, the two players are neck and neck, while Reignover has been offering more vision control.

Based just on the numbers, Reignover has a slight edge, but if Rek’Sai is banned, it will be hard to know if Fnatic’s Jungler can keep up his numbers.

The numbers look really good for xPeke, who leads Febiven in all of these categories except for DPM, but some context is needed. In a lot of Origen’s games, xPeke has had to do little more than stay in his lane and farm while his team wins the game around him. By the time he’s ready to come out of lane, his team usually has a gold lead and at least one Dragon stack, so all he has to do is show up to a team fight when the game is already well in hand.

This isn’t meant as a criticism of xPeke’s play. You can’t blame someone for having strong team mates. But his apparent statistical advantage over Febiven doesn’t tell the whole story. Still, this is a statistical preview, and xPeke’s KDA is hard to overlook. This matchup will be very close, and I just gave the Jungler coin-flip to Fnatic, so I’ll bite the bullet on this one.

Europe’s reputation is staked on strong Mid laners, but the carries coming out of the duo lane have plenty to say for themselves, as well. This match features two of the region’s best. Enormous KDAs, big damage output, leads out of the laning phase, diverse champion pools… Both Rekkles and Niels seem to be doing it all.

To help differentiate, let’s bring in another number: death share. On average, Rekkles is giving up 17.1% of his team’s deaths. For Niels, that number is a minuscule 8.6%.

That’s enough for me to give this matchup to OG.

Mithy has represented himself well so far this split, but YellOwStaR is Fnatic’s backbone, a rock-solid performer and veteran leader. Aside from a slightly lower ward output (and the number is fairly high for both players), YellOwStaR is outpacing his opponent. Fnatic’s stalwart is first among EU Supports in KDA, fourth in average kill participation, and first in ward clears per minute.

Mithy is a good player, but the numbers put his opponent in the lead for now.

By win/loss record, Fnatic looks like the favorites going in, but the Spring Split champions have been less convincing than their record suggests. This is anyone’s game to win, and anyone’s crown to claim as the top squad in Europe.

Let’s review my take on the role-by-role advantages:

Based on small advantages at the crucial carry positions, Origen looks slightly stronger going into this marquee matchup. If Reignover and YellOwStaR can dictate the pace and assert control over the early game, Fnatic has a very real chance to maintain their unbeaten record. But Origen’s early game has been impeccable, so my gut–and the numbers–are telling me to lean towards the LCS newcomers.

To find these EU LCS statistics and more, as well as stats from the NA LCS, LCK, and LMS, head to OraclesElixir.com.