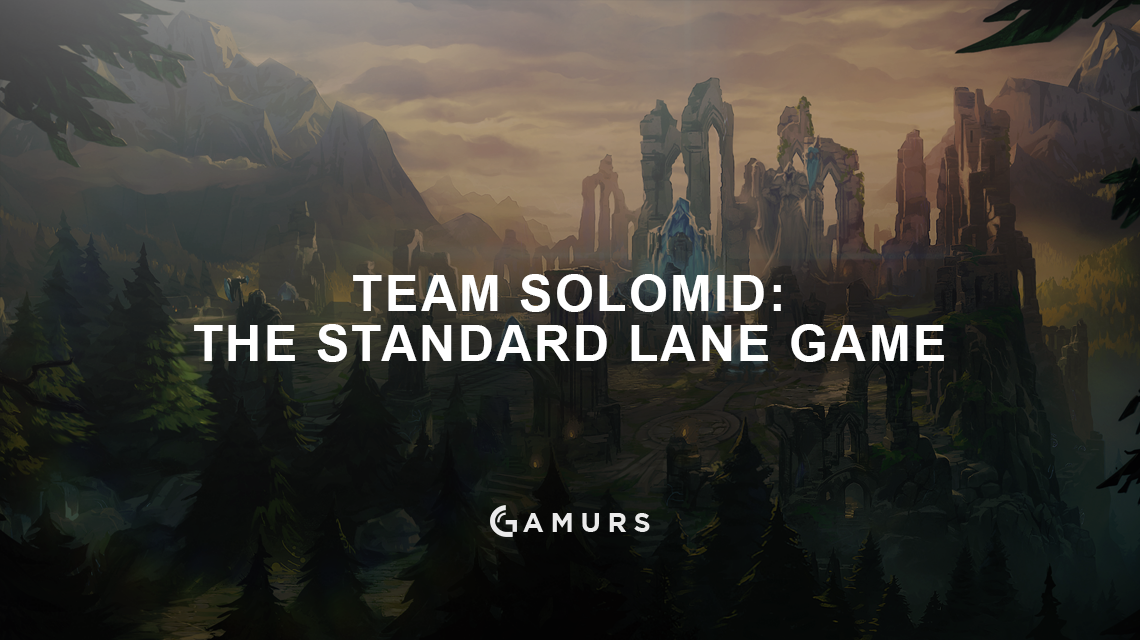 This last week, I’ve looked at every game Team SoloMid has played in matched lanes over the course of a month; which brings us from week six in the LCS regular season to now. I have documents on all my findings which can be found here for anyone who is interested.

In these documents, I only cover TSM’s laning phase, which I mark as over once the outer tier one turrets are down. Most of what is in these documents include Sven’s jungle pathing, TSM as a whole’s objective setup, and any gank opportunities that arose and how TSM played them out. I’ve found a lot of interesting stuff this last week – around 25 pages of it actually, which led me to the following conclusions of TSM’s early game/laning phase.

Where TSM Is Doing Well

Well, where do I start with TSM? They have played some damn good League of Legends when they are in standard lanes compared to their opponents. Some things that TSM does very well that may look very simple from a viewer’s standpoint would be the way TSM play around their winning lanes, which more often than not, are Bjergsen and Doublelift.

I don’t want to call what TSM does to Hauntzer “the Dyrus treatment” because they do protect him, they just don’t play towards his lane as often as they play towards Doublelift’s lane. On this topic, I noticed that TSM is really good at advocating resources to the side of the map according to where the strongest player on the opposing team is playing. For example, against Immortals when TSM matched with them in standard lanes, they focused heavily on the top side of the map, (Hauntzer and Bjergsen) ganking both lanes before even the 10 minute mark, and with Hecarim of all junglers.

TSM’s early aggression can look disrespectful to some, but it’s actually quite the opposite. TSM are very calculated when it comes to plays they make on the map, especially around the information they have on the enemy junglers’ whereabouts. An example from my notes of how well they play with the information they had, which won them this early game against C9 is as follows:

“TSM play really well around this blue buff spawning around 7:30, even after losing Bjergsen mid. Sven takes the raptor camp to get true sight around him and moves into Meteos’ jungle to get wards while Meteos and Jensen are pushing mid wave after killing Bjergsen. This play works with Bjergsen being dead at that moment or surviving honestly which is what’s so great about it. Bjergsen’s going to have to push mid either way against Vlad early, especially with level six, which sets up Sven to get the vision around blue buff. C9 can’t contest the Dragon either with both mid lane and bot having to catch waves/coming back from basing. TSM get a really great setup around the two objectives leading one into the other off the jungling Sven does this game.”

Almost every time TSM goes for a dive, a gank, or even to invade, it is a low risk-high reward situation. Their vision control from the jungle-support duo is surprisingly good considering the amount of time Biofrost and Sven have played together. On top of this, TSM thoroughly punish overstays, overextensions and blown flashes in almost every laning phase/early game.

One last thing I would like to touch on that makes TSM a great team is the selflessness of Sven and Hauntzer. Sven will almost always be down in CS at 10 minutes when he’s not playing Rek’Sai or Nidalee, just to get a small CS lead or summoner blown in one of his lanes. TSM have also regularly expended a TP or Shen ultimate from Hauntzer to simply deny the enemy bot lane a wave, which in turn gets Doublelift ahead – the lane TSM plays to the most in standard lanes.

Some people are going to tell me, “Well no, they play towards Bjergsen the most!” which as true as that might be, in standard lanes, that is simply false. Bjergsen is relied on to make his own room most of the time in standard lanes, and being Bjergsen, gets that room and by proxy spills it over into Doublelift’s lane when Sven and/or Hauntzer are ready to make a play on the bottom lane.

Where TSM Are Faltering

I can’t act like the points I’m about to list are massive flaws in TSM’s over early game because they are a great team for a reason. In fact, they’re pretty negligible when it comes down to the overall dynamic that is their early game/laning phase.

Some things that should be noted that can be abused by teams at the same level as TSM are as follows: TSM are not great at avoiding the cross map play the enemy can make when they’re making a play or showing on a different side of the map. Multiple times we see Hauntzer over extending while his team is making a play on the other side of the map, which can really neutralize the play that’s being made by TSM entirely.

The only time TSM is capable of reacting to the cross map play is with double TP being up, as seen in game two against Immortals when they countered Immortals five man play with their double TP. With that being said, TSM in general are very susceptible to over extending in the side lanes for farm once the towers are down in that respected lane. The amount of times Doublelift has been caught farming a side lane has really crippled TSM’s tempo during that time.

How to Punish TSM

Firstly, some of the strengths I’ve mentioned about TSM are largely due to them just being a better team than the opposition. A lot of their aggression, when faced and dealt with properly, can be punished. For instance, the TP play TSM made bottom lane very early against C9 in game two could have been collapsed on and punished with Impact’s TP and Meteos rotating from his blue jungle. Another instance would be in the same game, actually. TSM dove top lane over a ward and weren’t collapsed on or cross mapped at all. Things like this would either be neutralized by better teams or punished by them hands down.

Secondly, I noticed TSM are susceptible to being punished for sieging turrets with three or more people early on in the game when they definitely aren’t strong enough to fully commit to diving. A situation that arose that simulates this to an extent is in their last series of the split against NRG.

What I’m getting at is that teams play way too passively against TSM and it results in ludicrous early game stomps in TSM’s favor. If you really think you’re behind that much gold already, you might as well attempt to defend under your turret so you can at least have a chance of coming out ahead. Rarely do we see teams punish these mistakes TSM are making that aren’t named IMT and it’s truly sad watching TSM win in the fashion they did so often during the regular split.

With both of these being said, there isn’t a lot you can do if you’re against TSM and don’t match them in both individual skill and macro play team wide. My predictions for the remaining two best-of-five series TSM has to play in playoffs is a 3-1 win over Counter Logic Gaming and a 3-1 win over Cloud9 as well.

Do you think there is any other team in the world who is as good at standard lanes as TSM is? Let us know by commenting below or tweeting us @GAMURScom.

If you want to follow me or have any questions, you can find me on twitter @SchuckJeff. Thanks for the read!