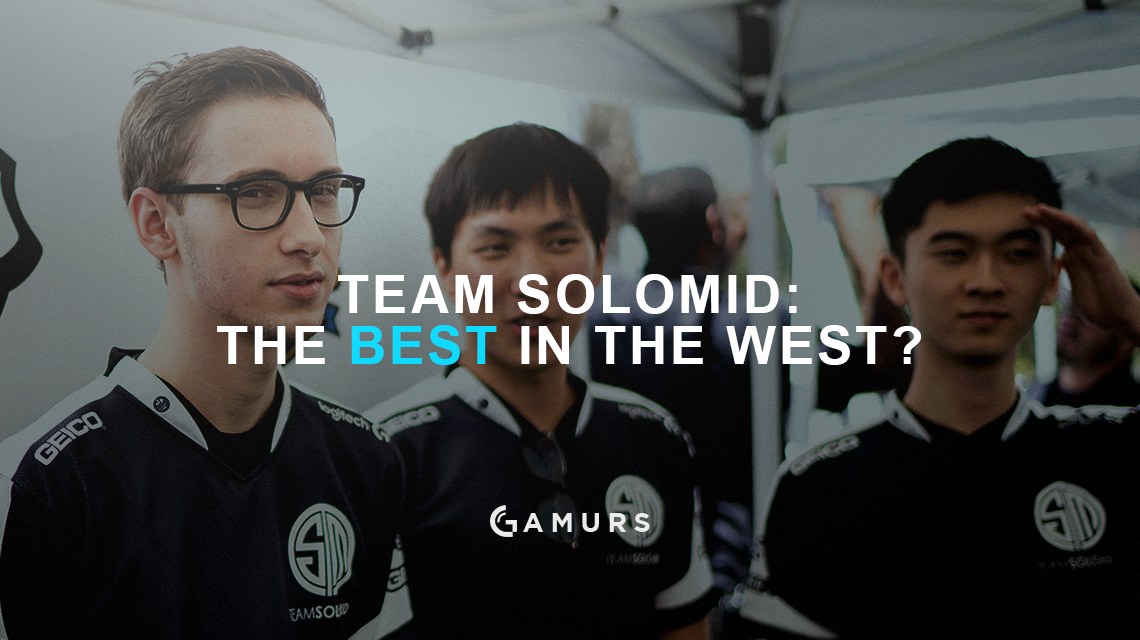 This article is the final installment of a series that will be highlighting every North American League Championship Series team that made the playoffs, starting with the six-seed and going up. If you would like to read the rest, here is the link to my author page. For anyone who read most or all of this series, I appreciate the audience and am open to critique and feedback.

Without further ado, the final squad: Team SoloMid. Before we dive in, let’s look at the roster:

Last split, this squad simply did not mesh. The team of handpicked superstars did not all have the same playstyle, and it wrecked their game. Even after a terrible split, the squad managed to sneak into playoffs and make it to the finals before falling to Counter Logic Gaming. Their problems were not solved, however, as support player Bora “YellOwStaR” Kim left the squad to return to his home with Fnatic.

Going into this Summer Split, TSM brought in a fresh face: LCS rookie support player, Biofrost. Though young and inexperienced at the LCS level, Biofrost was brimming with potential and saw success in the Challenger Series playing under Dream Team, but the most important fact was his synergy with Doublelift. The two worked perfectly together in lane and had the same plan: pressure, pressure, pressure. Because of this great synergy during tryouts, and Biofrost’s undeniable skill, the choice was obvious.

His impact was immediate.

Yell0wStar in the Spring Split with TSM

Biofrost in the Summer split with TSM

Does Biofrost look like the rookie here? If, theoretically, Yell0wStar’s numbers were adjusted for a 41-game split, he would still be behind Biofrost in every category. Biofrost only died one more time than Yell0wStar in the entire split, even after playing 23 games more than Yell0wStar did. The other stats speak for themselves. Let’s not forget that Biofrost managed these numbers as a rookie, playing on one of the most infamous organizations in all of League of Legends, with one of the most highly touted marksmen to ever play the game, and using a highly aggressive and unsafe style of play. Yell0wStar is a world-renowned veteran in his own right, and only put those numbers up in a relatively safe, non-aggressive lane during the Spring Split. Sure, Yell0wStar and DoubleLift clashed in lane because their styles did not mesh, but that was a pitiful performance no matter how you look at it.

Throughout the split, DoubleLift and Biofrost’s aggressive style of play bullied their opponents during the laning phase time and time again. No other team in the league had a duo lane as effective as these two players. DoubleLift had 14 kills this split with Biofrost as his only assist. To put that in perspective, the two next best duo lanes (Jason “WildTurtle” Tran/Adrian “Adrian” Ma of Immortals and Zachary “Sneaky” Scuderi/Andy “Smoothie” Ta of Cloud9) only had nine kills each picked up without the help of other teammates. DoubleLift also had six solo kills throughout the split, while WildTurtle only had two and Sneaky only had one. This lane is the most potent in the league, and they do not need any help to get to that point. DoubleLift and Biofrost are assisted less than any other top-tier duo lane in the league, but they still come out on top. DoubleLift lost his identity in the Spring Split, but he is right at home again now.

Just as a side note, if Biofrost isn’t your pick for Rookie of the Split, you’re wrong.

No need to go anymore in-depth on DoubleLift, Biofrost, or their ability to destroy literally everyone who tries to beat them. This isn’t me just heaping praise for no reason. These two are perfect together, and lead the league or come in second in basically any important category you can think of. Case closed. As good as this duo lane is, though, they are only two of the five players on this roster, and every last one of them has both qualitatively and quantitatively improved since last split.

Let’s start from the top, with Hauntzer. When the Spring Split’s star-studded roster was announced, many questioned the inclusion of Hauntzer and assumed he would be on an island, getting no assistance from his teammates. That’s pretty much what happened. In this extremely dysfunctional team, Hauntzer was mostly left to fend for himself, and he performed admirably. His numbers were nothing impressive, but Hauntzer was often the rock of the team (aside from Bjergsen, the face of TSM). He was steady, always doing his job and never really falling too far behind or getting beat too badly. During the Spring Split, he did the same thing, just even better. Hauntzer became more comfortable in his role, and the meta allowed him to do more than just sit back and stay alive. No longer forced to play tanks practically every week, Hauntzer has been a huge part of this team. Need a damage-dealer? He has Irelia. Need some CC? He has Swain. Need a tank? He has Shen. Obviously, even more champions fit into these categories, and Hauntzer can play practically all of them anytime he is needed. He believes in himself, and almost seems to have an entirely different mindset this split in comparison to the last one. Hauntzer is a major key to TSM’s success.

Now let’s look to the jungle, where Svenskeren is waiting. Throughout the Spring Split, Svenskeren was probably the most highly ridiculed player on TSM. Coming off of an up-and-down SK Gaming squad, Svenskeren was always one of the team’s highlights. Carrying his squad to victory was a casual occurrence for Svenskeren, but what happens when you put him on the same team as two other huge carries (Bjergsen and DoubleLift)? Well, he lost his identity. On carry champions (Graves and Kindred), Svenskeren actually had a 100% win rate in the Summer Split, along with Rek’Sai. He was comfortable, and doing what he thought he was meant to do as a player. Off of those champions, Svenskeren’s performance was abysmal. Statistically, Svenskeren was one of the worst junglers in the league during the Spring Split. Fast forward to the Spring Split and, like DoubleLift, Svenskeren is back in a comfortable place. It is hard to tell if the Spring Split performances were so bad because of miscommunication, being out of his element, or team issues, but whatever the problem was, it was fixed. Svenskeren has played a very healthy mix of champions in the Summer Split, filling whatever hole in the team composition that he needs to. He is quick to adapt, and ready to play any role (in the jungle of course) at a high level.

Now, the staple of TSM and the greatest player the west has ever produced: Bjergsen.

Even in the abysmal Spring Split, Bjergsen was a star and kept his team afloat. It was rough, very rough, but he is simply too good to lose. As good as he is, though, the Spring Split was ugly for Bjergsen as much as it was for anyone else on the squad. Ever since Bjergsen joined TSM, he has been the main carry. The team was literally, and I hate this pun, Team SoloMid, as all of its efforts led to feeding Bjergsen from game to game. This all changed when Svenskeren and DoubleLift joined the team. Three powerhouse players, accustomed to being fed resources all game, now had to share the spotlight and the gold on the same team. For the most part, TSM strayed from giving Svenskeren the resources he wanted, so really the competition was between Bjergsen and DoubleLift. The problem was, DoubleLift ended up with the lion’s share of gold a majority of the time, but was stuck playing so passively that it did not matter. So Bjergesen, with the second highest gold share on the team, fought to keep the squad alive while competing for resources with DoubleLift and Svenskeren.

The team had no identity and, it seemed, no plan. Every game was a hodgepodge of confusion and strange resource allocation, with no clear win condition. It was just a mess.

This split, things are different. They figured it out. Bjergsen, though still not getting the highest gold share on the team, is destroying absolutely everyone in lane. The “competition” with Nicolaj “Jensen” Jensen for best mid laner in the league was no competition at all. Eugene “Pobelter” Park? Bjergsen has no problem with him on the rift either. Bjergsen is so good because he seemingly never dies (the only player with less deaths than him in the NA LCS this split is Biofrost), and he is always there when his team needs him. He actually has less kills than Jensen and Pobelter, and less assists than Pobelter, but this speaks highly of his team. TSM does not need Bjergsen to participate in all of the fights and get all of the kills in order to win, because every player on this squad can make the most out of every situation without help. These numbers are also likely lower for Bjergsen simply because he never has the time to get kills, considering TSM has the fastest average game time in the league.

TSM wins, and they win quickly.

It is really, really hard to say anything negative about this team. Their one slipup this split was a 2-1 loss to Phoenix1, a squad riding high and on a hot streak. The series came after a patch that altered the game a bit more than TSM expected, and it showed. They were cocky, and had not practiced enough and adapted to the new patch. This was wiped from our memories very quickly, though, as the squad went on to win their next three series to close out the split going into playoffs (including a very convincing 2-0 sweep of No. 2 Immortals).

The regular season is one thing, but as Immortals can attest, the playoffs are a whole new game. A new meta awaits TSM in their semifinal bout with heated rivals Counter Logic Gaming. This split will mean nothing to TSM if they do not win the playoffs and qualify for Worlds without being forced into the gauntlet, but right now it does not look like anyone can truly stand in their way. They are the undisputed best team in North America, and the best team the Western Hemisphere has ever produced. Now, they just have to prove it in the playoffs and at the international stage.

Will TSM reclaim their crown? Are they the best team the west has ever produced? Let us know by commenting below or tweeting us @GAMURScom.