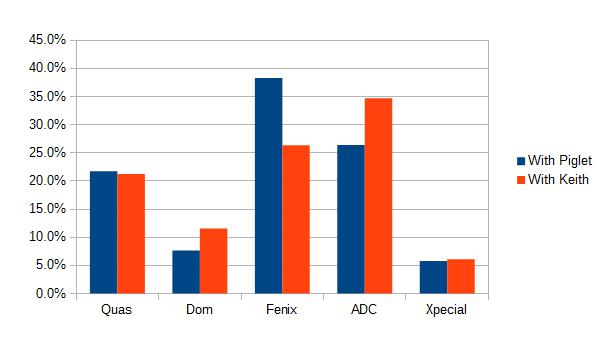 Team Liquid has now played exactly half their games with Keith and half with Piglet as ADC. Their records are quite disparate; with Keith at 5-1 and Piglet at 2-4. Lets take a look at the distribution of several key stats to see if there is a correlation with the win rate differential.

Lets start with Strength of Schedule. Difficulty of teams played typically has a strong impact on results. We will look at average standing (as of 3/3/2015) of opponents.
Keith (Impulse, CLG x2, WFX, TSM, Gravity) = Average of 3.8 place
Piglet (C9, TSM, DIG, CST, T8, Gravity = Average of 5.3 place
According to this linear difficulty assumption, Keith has played teams that average 1.5 spots better. We can agree that NA LCS difficulty doesn’t scale linearly, but just look at the top 3 (all those higher than Liquid).
Keith: Beat CLG twice, Beat TSM
Piglet: Lost to TSM, Lost to C9
So from this we can conclude that Keith’s relative success in the w/l column is not due to playing weaker opponens.

Now lets look at some in-game statistics. All of these stats we will look at in terms of % of total team for each player (Quas, Dom, Fenix, Xpecial). We can compare the breakdown with Keith and with Piglet and see if there are relevant differences. And by explaining any discrepancies, we may be ablet to better understand why Keith is more successful.

So Keith does 8% more of the team’s damage compared to Piglet. This drop is almost exclusively from Fenix dropping in damage; Dom does about 4% more damage with Keith in. For whatever reason, Keith is better able to do champion damage than Piglet relative to the team.

Keith and Piglet earn exactly the same amount of the team’s gold. With Keith, Fenix does give up some gold to Quas and Dom. But this disproves any theory about resource distribution; they have same stuff to work with.

An interesting statistic available through Match History (see footnote). What we see is a difference of 6% between Keith and Piglet. Keith takes less damage relative to the team.

Here we go, we found it! For some reason, when Keith is playing, Quas buys more wards. Now we know how to win!
But seriously, I think the Quas/Dom difference is explained by trinket changes and item choices. The new patch lets Quas use the Greater Stealth Totem, and Dom sometimes buys sightstone. There is a 4% difference in warding between Keith and Piglet. Which is generally considered good; we could probably find this related to when they switch their trinket types.

Unfortunately we couldn’t prove much looking at statistics (sometimes happens in science).
What we can conclude is:
1. Though style of play may be different, the resources allocated to the ADC position (as measured in gold) are exactly the same for both players.
2. Keith is able to more damage and take less damage (relative to the team) than Piglet. This may be a result of playstyles (safer champions) and may be repetitive statistics (dead –> no damage). It is a difference of note nonetheless, and could be taken as proof that Keith is performing better.

Footnote:
I have no idea how this is actually calculated. Whether it is damage taken (after resistances) or damage dealt (before resistances). If it is damage taken than the number for tanks should be far greater, which I think is the case, based on Quas’s total. In other games I have seen this combined with a stat to give a better overall idea.