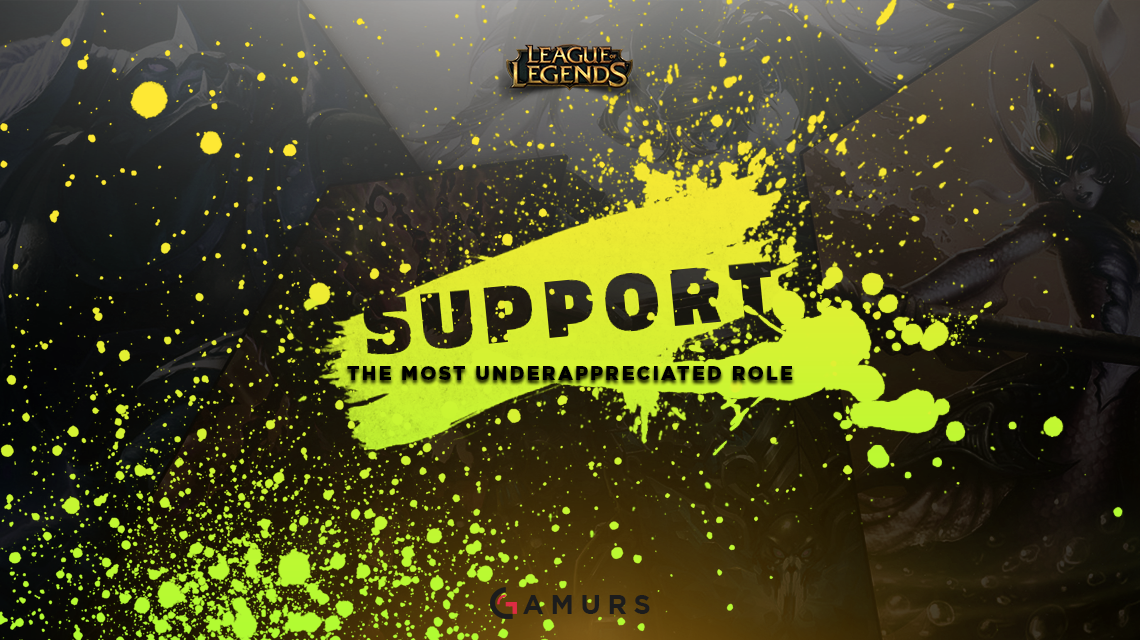 It goes without saying that League of Legends is definitely a team oriented game; everything about League revolves around chemistry and proper execution of team engagements.

Despite this widely accepted concept, there still remains somewhat of a bias towards particular players and in-game positions. To be specific, I’m talking about the support role.

Anyone who watches League can tell you about the different positions or roles on a team. However, only a few of these roles get proper recognition for their play. No matter how well they play, it always seems like the support players go unnoticed and get brushed aside from the spotlight.

This is comparable to traditional sports as well. In football, the offensive skill players, such as the quarterback, running back and wide receivers, get all the attention. But how often do you see highlights or hear about an offensive lineman in the media? Almost never.

While this is just one example, I think that it is applicable to compare support players to offensive linemen, in the sense that they do not get the praise and admiration that they deserve, except from the biggest fans.

In this comparison, the AD Carries, mid landers and top laners would essentially be equivalent to the quarterbacks, running backs and wide receivers. The players who play these positions are the ones who get all of the kills, and thus, get most, if not all, of the post-game recognition from the media and analysts.

Meanwhile, the support players are the ones who play to help their teammates. Just like an offensive lineman, who is responsible for protecting their quarterback, a support’s job is to protect and assist their ADC in the laning phase or other damage dealers during team fights. If they play a tank champion, such as Braum, Alistar or Trundle, the support will be standing in the frontline, taking all the damage (and potentially dying) so that the other players on the team can deal damage. Supports can also play champions like Soraka, Janna or Nami, and use their abilities to heal their teammates in order to help them survive longer in team fights.

Huhi gets caught out and it leads to an ace for Apex! #NALCS https://t.co/xaAXAwIncL

Regardless of which kind of champion they play, the most important goal for a support is to keep their damage dealers alive, no matter what. If the support fails to complete this goal, the likelihood that their team will lose increases. On the other hand, if the support plays well and succeeds in keeping their ADC and other damage dealers alive, their team will have a better chance of winning.

On top of this, supports are also extremely underappreciated because even if they do play well and complete their main task, they still rarely get any recognition. A support could play a flawless game, but if they play so well that their ADC drops double digit kills, their ADC will most likely be the MVP of the game.

But, one positive quality (or a necessary qualification, depending on who you ask) of most supports is that they are selfless and do not care about the recognition; they just want to win. Support players know their role and duty, and as long as they are able to help the team win, they do not care who gets MVP of the game. No amount of complaining ADCs can deter a true support from doing everything in their power to help the team win.

Although the first week of action in the 2016 Summer Split of both the North American and European League Championship Series (LCS) just came to a close, there were still plenty of examples of great support play leading to a win, as well as poor support play resulting in a loss.

To begin, Fnatic got off to a great start in the EU LCS with a commanding 2-0 win over Giants. In this series, Fnatic’s support Bora “Yellowstar” Kim played extremely well, showcasing a scoreline of 1/2/38 (kills/deaths/assists). Yellowstar’s excellent play in the series resulted in Fnatic’s ADC, Martin “Rekkles” Larsson, producing a 16/4/16 scoreline. By completing his duties as a support, Yellowstar was able to keep Rekkles alive and help him perform exceptionally well.

In the NA LCS, Team SoloMid began the split with a rematch of the 2016 Spring Split Finals against Counter Logic Gaming. In his LCS debut, rookie support Vincent “Biofrost” Wang went 1/3/27, directly resulting in Yiliang “Doublelift” Peng producing a scoreline of 13/4/11 en route to a 2-0 win over CLG.

However, these are both two special storylines currently in the LCS; Yellowstar was making his return to the EU LCS, and Biofrost was playing in the first LCS match of his career. If it were not for these unique storylines, it is quite possible that neither support player would have shone in the post-game spotlight, despite their MVP-caliber performances (Biofrost did win one Player of the Game award in their match against Team Liquid).

LOD gets a triple kill when a fight starts in Team Liquid's base! #NALCS https://t.co/ZRY8cgjF77

On the other hand, just as great support play can help a team win, poor support play can cause a team to struggle. The Giants Gaming bot lane duo of Morgan “Hustlin” Granberg (support) and Son “SONSTAR” Seung-ik (ADC) went 3/10/7 and 1/11/7 respectively in a 2-0 loss against Fnatic. In their other game of week one, Giants lost 2-0 again, this time to G2 Esports, as Hustlin went 1/7/8 and SONSTAR produced a scoreline of 4/5/5.

In both of these last two examples, the support players did not play well, which could have directly impacted the rest of the team’s performance, as well as having an impact on the result of the match. But, this is where the double-edged sword exists. In the first scenario when the support plays well and the team win, it can be disheartening for the support to be underappreciated. However, in the second scenario when the support plays poorly and the team losses, they are most likely being blamed internally for the loss. It almost seems like supports are in a lose-lose situation in terms of their personal performances being critiqued on how their play affects the team.

If you have ever played as a support in League of Legends, you know exactly what I am talking about. But at the end of the day, the true supports do not give much thought into how underappreciated they are; they just go out and do their job to help their team win. Selfless play leads to success, and good supports embody this seemingly-simple philosophy, regardless if they do or do not receive the attention and praise that they deserve.

Do you agree that supports are the most underappreciated players in League of Legends? Let us know by commenting below or tweeting us @GAMURScom.