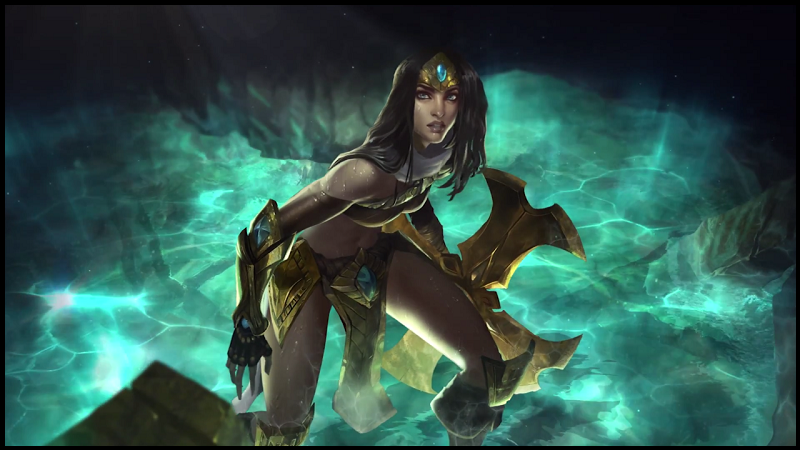 Foreword: This is a short article purely analysing Sivir’s kit and why it’s so effective in current competitive League of Legends (as of 5.11).

It has become known by a variety of different names, but the classic composition built around Sivir has dominated the competitive scene since the Mid-Season Invitational. The fast, aggressive nature surrounding the strategies used with Sivir go hand in hand with the success they’ve seen, and the aforementioned marksman (or markswoman, if you prefer) is at the heart.

So, with her top tier status definitely cemented as of patch 5.11, why do so many analysts adore this pick?

What wave? I don’t see a wave.

Let’s start with the most basic mechanic that she offers to the team: endless wave clear. It doesn’t cost much mana, but Sivir has the ability to delete a wave with two spells (in some instances an entire wave can disappear in less than a second, courtesy of critical strikes).

The strategic advantages this offers cannot be understated.

So, we’ve touched on her exceptional wave clear, ease of use and strong laning. What really makes her the strongest marksman currently in the game, however, is her utility — the ultimate, On The Hunt.

A bundle of good things… and gold.

Aside from these obvious traits, there are some others to mention. The passive, Fleet of Foot, acts as a natural Furor boot enchantment, which aids Sivir individually in skirmishes. In fact, she can survive a difficult lane (due to outside factors; perhaps there was a gank, etcetera) purely farming with the Boomerang Blade and utilising her mobility and Spell Shield for positioning.

In addition, as Ricochet is an auto-attack reset in addition to being area of effect, it allows for fantastic short trades in lane. In fact, done properly and coupled with Spell Shield, there’s the possibility for Sivir to win lane based on trades alone. Not to mention with the mana return on the aforementioned ability, the Battle Mistress is very much self-sufficient in lane.

An afterthought of Ricochet: the synergy with the attack speed ‘steroid’ courtesy of On The Hunt is particularly strong in early skirmishes, and coupled with the potential to critically strike, can decimate a vulnerable opponent.

As it stands, this kit is one of the strongest in the game, and is very much first pick / ban worthy, along with Gragas, Ekko and Ryze.

But if you find yourself on the wrong end of her blade, don’t fret. After all, “it’s just business.”

Credit to Riot Games for the image.

Written by Mitchell “Zeju” Smith, if you liked this analytical review of Sivir’s kit in the competitive scene, you can follow him on twitter, @Zejura.

With thanks to Alexandre Weber for his input on the subject, you can find him on twitter, @AleWM9.