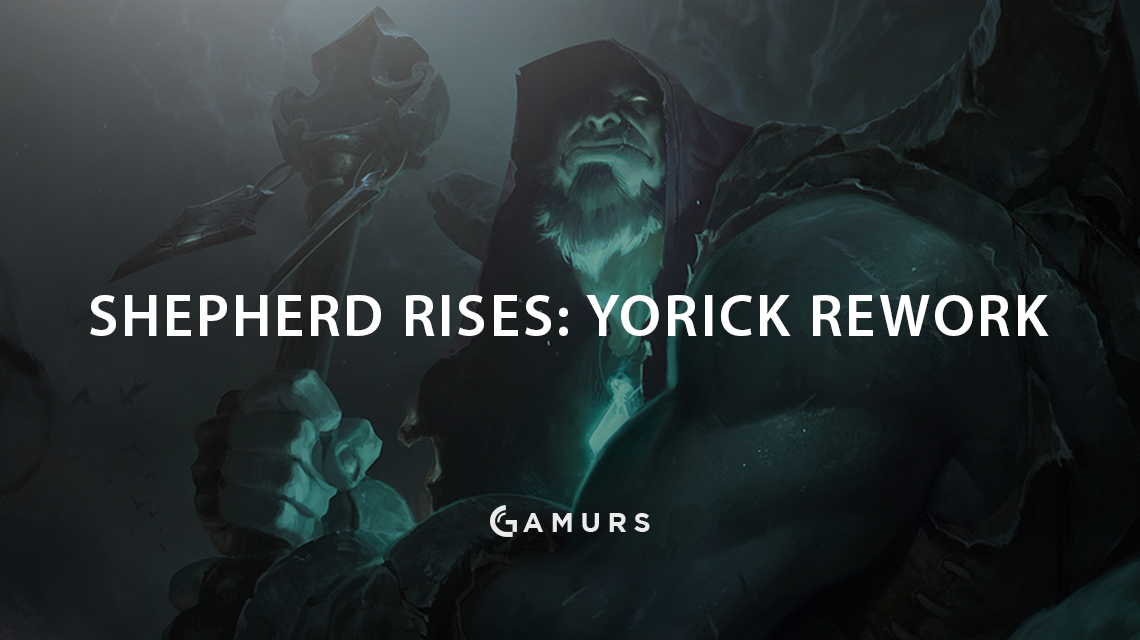 The old gravedigger of leaguepast has finally gotten some much needed attention. Being one ofthe only champions left from the early years of LoL to not betouched up yet, Yorick was due for a complete makeover.

Not only was Yorick bad andoutclassed in almost every scenario, he just looked plain ugly.Riot listened to the cries of the community and gave him a completerework, both design and ability-wise.

Passive – Shepherd of Souls: When minions die near Yorick, they have achance of leaving Graves. Enemy champions are guaranteed to drop aGrave on death. Graves allow Yorick to raise ghouls that actsimilar to regular minions. They will push a lane for as long asthey’re alive or until they move too far fromYorick.

Q – Last Rites/Awakening: This will be Yorick’s main ability. LastRites buffs Yorick’s next basic attack, healing him for abase amount. When Yorick is below half health, the Q healing isdoubled. If he last hits a minion with Last Rites, that minion willsummon a Grave. If three or more Graves are active near Yorick atonce and Last Rites is on cooldown, Yorick gains access toAwakening. Awakening allows Yorick to raise up to four ghouls fromGraves nearby.

W – Dark Procession: Dark Procession basically works sort of like ifJarvan IV’s R and Veigar’s E had a baby. Basically,Yorick creates a small “arena” on a target locationthat can trap enemies inside. Allies can walk freely through thestructure while enemy champions cannot. The gimmick is, enemychampions can attack and destroy the wall to bring it downprematurely. I can see this ability being a huge outplay mechanicthat will separate the good Yoricks from the great Yoricks. Placingthis ability to trap two or more enemies and comboing it with bigAoE ults can spell doom for the enemy if they can’t break outof it in time.

E – Mourning Mist: Yorick’s E is his second ability thatplays off his ghoul passive. Mourning Mist is a skillshot/cone thatmarks and slows enemies on hit. Enemies that are marked areimmediately targeted by all nearby ghouls, allowing the ghouls toleap to them from long distances. This tool can be very effectiveat poking melee champs from range, preventing CS, or even justslowing your opponent enough for your jungler to get a gank off.You can even use this tool in teamfights to make your ghouls targetand zone out carries.

R – Eulogy of the Isles: Yorick immediately summons the Maiden of theMist. Maidens of the Mist work similar to ghouls in that they willpush a wave, except they don’t die when Yorick goes out ofrange. At higher levels, his ult will also summon ghouls with theMaiden. Maidens also summon a ghoul every time a nearby enemyminion dies, up to four at a time. On top of that, when Yorickattacks a champion who is being attacked by a Maiden, he will dobonus magic damage every auto attack. The Maiden is killable, andcan be easily dealt with by smiting it or kiting itaround.

Yorick’s basic combostarts with waiting until you have enough Graves nearby to summonghouls, then engaging on your opponent with your E and Q. Once theghouls are summoned, they will hack away at the enemy championuntil they kill them or the E mark runs out. You will constantlywant to Q minions and champions to make sure your health pool is ashigh as possible. The more ghouls you summon in lane, the higherchance you can out-trade and out-scale your opponent. Come levelsix, feel free to drop your ult on the enemy after you trap them inyour W for an easy kill. Be careful though, missing your E ortrying to fight without ghouls or a Maiden will likely spell deathfor you.

I can see Yorick being a realcompetitor for Shen’s “split push and TP into fights”strategy. Shen is a strong pick in the pro scene because of hisability to instantly teleport to a fight and sway the tides ofbattle with shields and cc. Yorick, on the other hand, can stickwith the team the whole time, letting his Maiden shove a side lanewhile he fights the enemy elsewhere. This will force the enemy tosend someone to stop the Maiden, making the fight in favor forYorick’s team, or fight Yorick’s team immediately,possibly causing rushed bad decisions.

The only caveat to pickingYorick instead of Shen is that Yorick won’t be nearly astanky since he lacks tanky stats and shields. Assuming your teamhas a tank elsewhere, Yorick will be a strong pick and will likelybeat most competitive top laners in skill matchups.

Only time will tell ofYorick’s competitive viability, but I have high hopes forhim. He seems like a strong split pusher with insane 1v1 andoutplay potential. With sustain for the laning phase and tools tocause pressure situations for the enemy team, in the right hands,Yorick just might be the next big thing.

Do you think Yorick will beviable competitively? Let us know in the comments below or on ourTwitter – @GAMURScom and let me know personally at @iEnglishBetter.