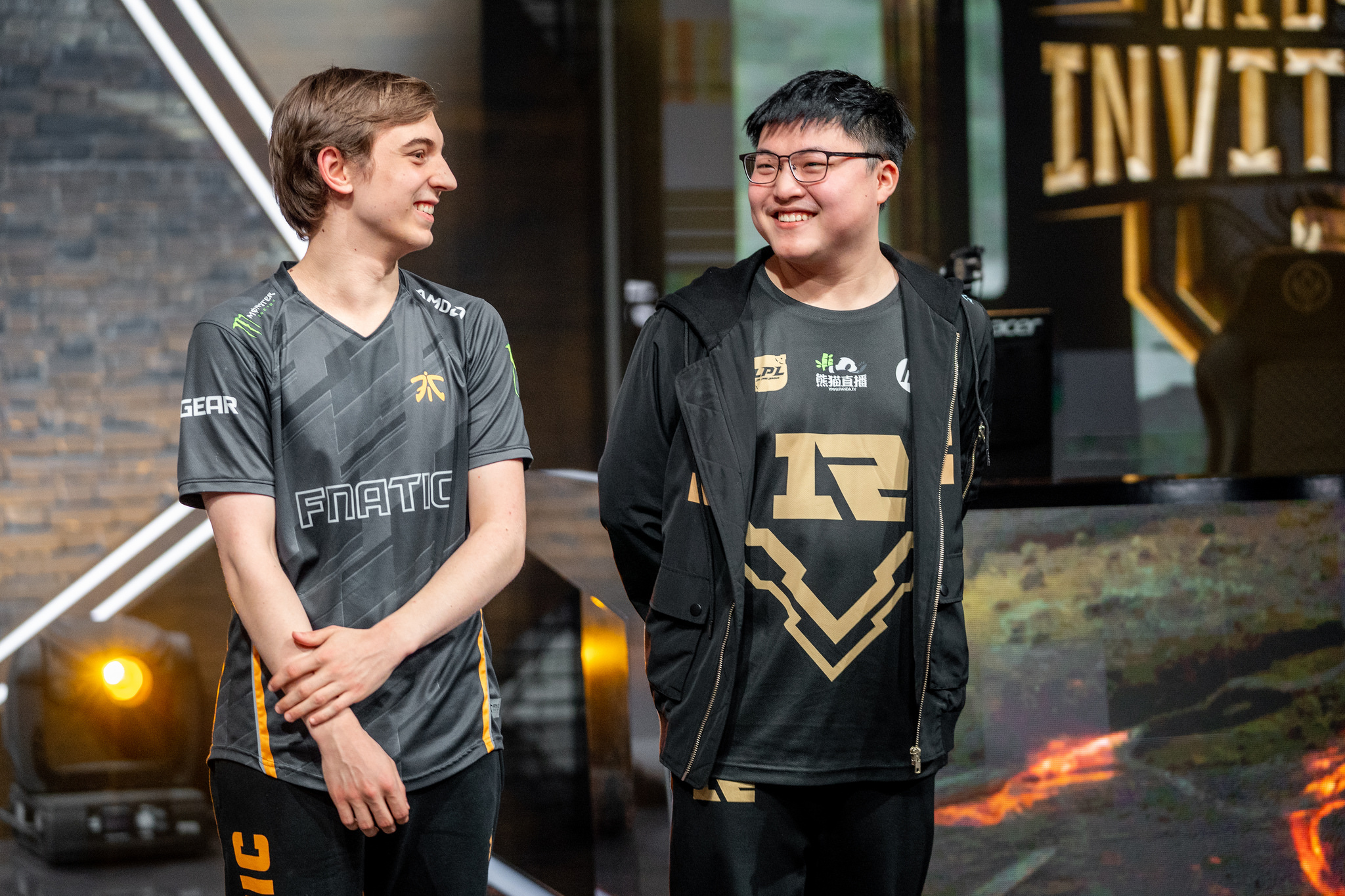 Fnatic’s history against the LPL’s Royal Never Give Up is quite depressing if you’re one of the many European or North American fans rooting for the boys in yellow and black. If you’re a fan of RNG like much of China’s LPL audience, however, you’re probably much happier.

RNG bested Fnatic twice in the MSI group stage this year alone, but more painfully, as Fnatic’s fans will recall, RNG was the team that knocked them out of Worlds last year in the quarterfinals. This weekend, RNG faces Fnatic in the semifinals of MSI.

MSI has no quarterfinal stage, which means this is the very first knockout round outside of the group stage. This is essentially the MSI equivalent of the quarterfinals at Worlds. There are undoubtedly similarities, but Fnatic will work very hard to ensure that history doesn’t repeat itself. Their grudge with RNG is on the line, and they have a lot to prove.

Deer in the headlights

One player that’s been talked about more than most at MSI this year has been Fnatic’s legendary ADC Martin “Rekkles” Larsson, and unfortunately, the talk hasn’t been great. Coming into the tournament, Rekkles was expected by fans, players, and analysts alike to be one of the best marksmen at the tournament. These were high expectations, to be sure, but Rekkles has been around for six years, and he’s done nothing but earn them.

He won MVP of the split, MVP of the Spring Split finals in the EU LCS, and countless awards and international appearances before that. He’s long been the player to carry Fnatic, and in fact, they have a very similar strategy as RNG—pump every resource available into the bot lane to get him fed.

Despite that strategy and his reputation, Rekkles hasn’t lived up to his past performances. Oddly enough, he hasn’t lived up to them most prominently while playing against RNG, and there’s a very strong possibility that this grudge between the two teams is the culprit.

Starting with 2017 Worlds, every time Rekkles has gone up against RNG’s Jian “Uzi” Zi-Hao, Uzi has dismantled him in lane. Uzi is undoubtedly one of the best players in the world. He’s been playing just as long as Rekkles, and yet, Rekkles freezes up every time they meet.

Fnatic mid laner Rasmus “Caps” Winther has mostly made up the difference. In fact, he may just be the best mid laner at MSI, and if he isn’t, he’s certainly made a strong case for himself. Unfortunately, though, the meta currently favors ADCs to carry longer games, and Uzi is very, very good. Caps hasn’t been quite enough.

If Fnatic wants to stand up to RNG, who are currently favorites to win MSI as a whole, they’ll need Rekkles back to his old self. This is, by no means, a call for Rekkles to “get gud,” either. This is a call for Rekkles to remind himself and realize who he is. He is one of the best players in the world, just like Uzi, and he’s one of the few left in the pro League of Legends industry that has the capability to match him. It all comes down to confidence, and Rekkles needs to rediscover it.

There is a realistic possibility that Rekkles can’t pull off the sweet superhero redemption arc, though. If that is the case, Fnatic will have to face the music, and the music in question is named Caps.

The most obvious option is Yasuo, a champion he’s already proven several times that he’s a master of, but there’s also the likes of LeBlanc, Azir, Ryze, Swain, and Vlad that he’ll be able to choose from. Hyper-carrying often means a late-game champion that packs a fair bit of high sustained damage in their kit, so that they can melt through a beefy frontline assuming the carries are well-protected.

Part of the burden also lies on Fnatic jungler Mads “Broxah” Brock-Pedersen, who’s had an incredible performance at MSI so far, too. His ganks, particularly on the mid-lane, have been the tool Caps has needed to really shine, but a lot of his focus is still on the bot lane, as well as the rest of the team’s rotations and pick/ban phase. If Fnatic comes to the point where they need to solely rely on Caps, Broxah’s pathing will have to reflect that.

He’ll have to become more unpredictable, and almost all of his ganks and map movements will have to be designed with the mid lane in mind. If Caps gets the late-game hyper-carry he needs, Broxah will need to focus all of his efforts into snowballing a mid lane lead to that point.

This Friday at 5am CT [12pm CEST], Fnatic will duel RNG in the most important match of their year so far. If they win, they can finally chalk one point onto the RNG vs. Fnatic scoreboard, but they have to fight an uphill battle to do so.