Starting today, League of Legends fans on Reddit will be able to customize their profile on the site with avatars inspired by Arcane.

Riot Games is teaming up with Reddit for a crossover surrounding the upcoming animated League Netflix series Arcane. As more episodes of Arcane are released on Netflix and characters get introduced over the next few weeks, Reddit will make more avatars available to select from. The first round of Arcane character avatars on Reddit will launch on Nov. 1, with Vi and Jinx available for your Reddit profile. 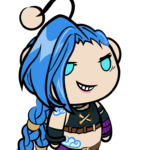 To access the new Arcane-inspired Reddit avatars, head to your Reddit profile and click the dropdown menu in the top right corner of the site. Select the Create Avatar option to start customizing your account with Vi, Jinx, and, eventually, the cast of Arcane.

“The League of Legends community on Reddit has been one of the most active and vibrant homes for fandom throughout [Riot’s] history, so it’s only right that we do something special for them,” said Brandon Miao, cross-product experiences and partnerships lead at Riot.

Eleven avatars in total could be released, according to a promotional image released by Reddit for the crossover. Nine silhouettes stand unrevealed behind Vi and Jinx in the promo art.

Arcane is set to release on Nov. 6 on Netflix, with additional episodes coming on Nov. 13 and 20.