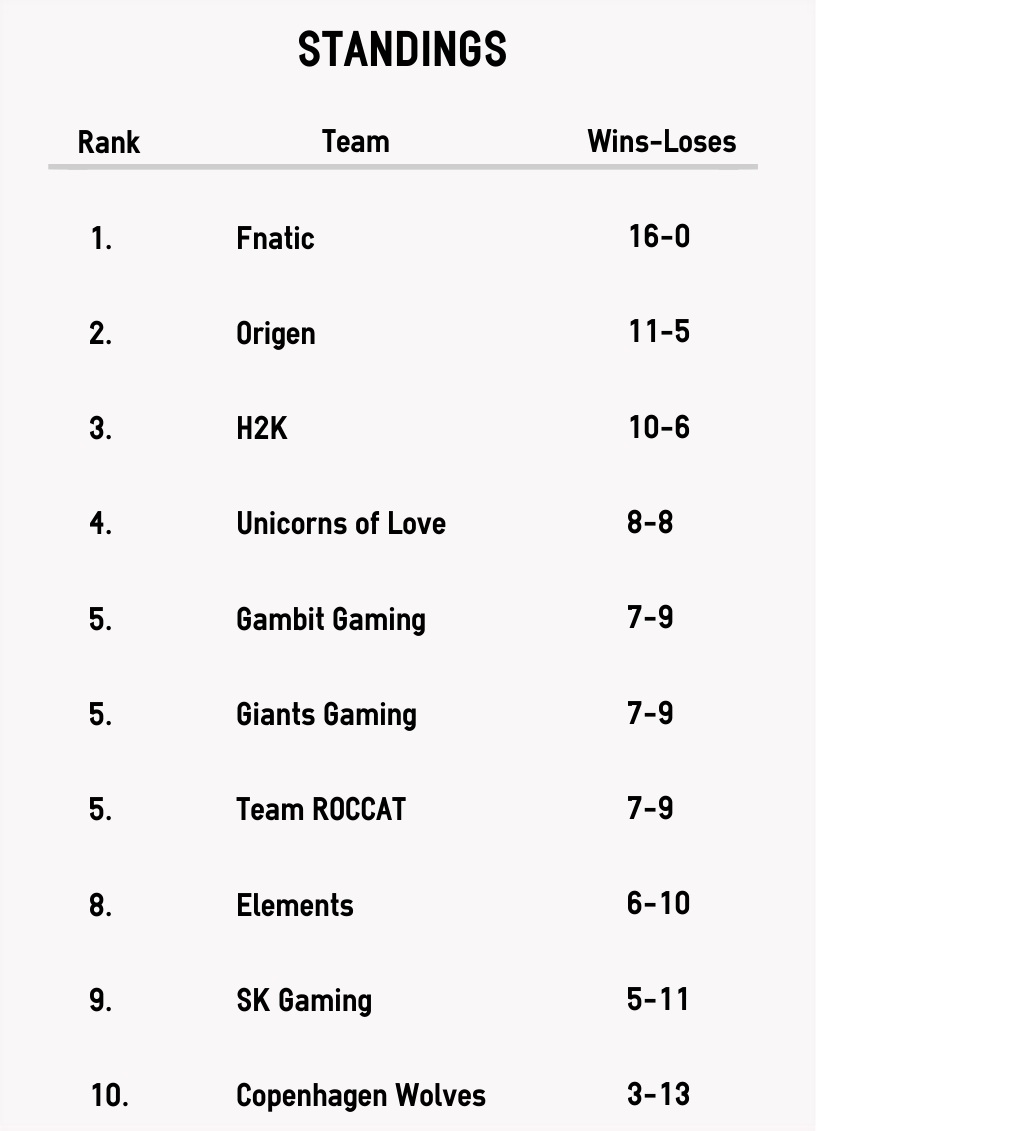 Being known for close standings and huge tiebreakers European LCS makes its best not to disappoint us this year and comes into the last week with a lot of potential tiebreaker scenarios. In the most exciting one we can get SEVEN extra games, apart from the ones scheduled for Friday. This can happen in case a 5-way tie occurs, H2k is tied with Origen for second and SK is tied with CW for ninth. This scenario will be shown later. Without further ado lets look into the standings before this week:

As you can see (and probably all already know) the fight for playoffs will be very close and even SK can still make it in. Only Fnatic can be sure about which place they will take after this week, the rest will still have to fight for the best possible places. With that said we have to check the games that will be played this week:

If this was just a standard LCS week, somewhere in the middle of the season, apart from the H2k-Origen game, the matches would not seem that exciting. The beauty of the situation is that every of the matches will have a huge impact on the final seedings and that any of them will be crucial for the teams involved.

OK, but where are the tiebreakers?

In order to keep the article in some kind of order I decided to divide the tiebreakers into how many teams will be involved. Basically we will start with the most exciting- 5-way tie and go through the rest later.

There are two possible 5-way ties to occur, but both of them are, unfortunately, very unlikely.

In case of the tie for 4th place we need Gambit without Forgiven to win against H2k and Copenhagen Wolves to upset the Giants. The problem with Copenhagen Wolves might be that, if they lose on Thursday to ROCCAT the game against Giants will not matter to them, as they will be already auto-relegated. If they win with ROCCAT though we will need ROCCAT to upset Origen again. I would not bet my money on any of these results, but this is our biggest hope as the second scenario includes defeating Fnatic.

If we hope to get the 5-way tie for 5th place we will need SK to defeat Fnatic. Apart from that Copenhagen Wolves will have to have a 2:0 week. This will be extremely hard, because if on Thursday everything goes according to the plan Copenhagen Wolves will be auto-relegated before the second day matches even start, so it is hard to believe that they will find motivation to fight with Giants.

As we can see only one of the four scenarios includes defeating Fnatic, so at least the impossible is not needed to happen. A few conclusions from the tiebreaker scenarios for 4th place:

The good news for Elements fans is that they can go only 1:1 and still have a shot at going 5th. The important game will be against Gambit, if they lose, they can only get 6th place at best. Also from a tiebreaker fans: it will be much better for us if Gambit loses to Elements, as it will open many more tiebreaker scenarios. Each of the ones mentioned above (even for 4th place) includes this game going to Elements. Other conclusions:

If any of the 6th place 4-way ties are to happen SK and Elements have to be involved. For this to occur SK will have to defeat Fnatic and again all the scenarios are involving Elements beating Gambit. Only the teams that are currently 5th in the standings change in these scenarios and the one that is absent in them is simply guaranteed at least 5th place. Other conclusions:

There are plenty of scenarios in which 3 way tie occur, so as not to make this article too long I decided to now show you the best possible scenario in which we get to watch 12 LCS games only on Friday.

There is only one way in which we can get the longest night with the new LCS format. The results needed are shown below:

The good thing is that Fnatic does not even have to lose a game in this scenario, the bad thing is that Copenhagen Wolves have to somehow go undefeated (which is not that impossible). None of the games seems impossible, probably Gambit without Forgiven might have a hard time dealing with H2k, but then again H2k lost their last game to Copenhagen Wolves. Everything is possible, so if you like to watch LCS save this image and check if everything goes according to the plan.

The most exciting part is that in this case we get:

Most of the tiebreaker scenarios can be ruined already on the first day, so let us now discuss the importance of each game. Get ready, because the day is stacked and each game will be very important.

The first game will already give us a lot of information. First of all if ROCCAT win Copenhagen Wolves will be out of LCS, which will probably highly affect their attitude towards the Giants game. This would not be appreciated as in most scenarios we need them to win it. There is a chance for Copenhagen Wolves as they finally won a game and stopped the losing streak and they have done it against H2k. Both of the teams are looking better in the last weeks, so we can at least hope for Copenhagen Wolves to win this game, which would probably make their next day win against Giants much more possible.

One of the two most important games in shaping the playoff spots. It is not as crucial for the tiebreakers as Elements-Gambit, but it surely is very important for the middle of the table standings. If Giants lose this game they are out of the fight for 4th place. On the other hand if Unicorns lose they are in a very bad spot as they are left with a game against Fnatic on day two and will have to hope for favorable results in other games to have a chance to get 4th, it will be still possible though. For Giants, who will be playing Copenhagen Wolves the following day this is also a crucial match up: if they win and later manage to defeat the last place team they will secure a spot in at least a tiebreaker for 4th place. In this scenario if Unicorns lose to Fnatic Giants will be sure to get to playoffs.

For Fnatic the game will be only about going 18-0 as they have already secured the first place. For SK, on the other hand, this game is about still having a chance to get to playoffs. They will have to pull out a miracle and beat Fnatic to keep their hope alive (and our hopes for one of the 5-way ties). The good thing is that no matter how this game plays out there is still hope for a 5-way tie and we only need Fnatic to win to hope for the 12 game Friday.

This game would be by far the most exciting game of the day (and even week) if this was any other week, when the tiebreakers would not matter. The fun part is that the result will not matter for any of the 4 and 5-way ties, but the game will still be exciting as this is the battle for second place. If H2k wins they will not have to root for ROCCAT to defeat Origen, as it will be enough for them to beat Gambit and at least force a tiebreaker. If Origen wins though they will secure the second place, no matter if they win with ROCCAT or not, due to being 2:0 in head-to-head with H2k.

Tiebreaker Game of the Week. Most important game of the day. The game where all the hopes for any 4 or 5-way ties can die. Who would have thought that at the end of the split not the H2k-Origen game, but this will be crucial and so interesting one. If Gambit wins they will surely avoid relegations. The win might not be that easy though as they will have to play without Forgiven, which opens up a huge chance for Elements. They have to win it to keep the huge tiebreaker hopes up. Dear fellow tiebreaker enthusiasts, on Thursday we all are Elements fans (I know, its hard for me too…), lets hope that the dream of 5-way tie will survive till Friday!

On a less exciting note: if Elements win they will also have 2:0 in a head-to-head with Gambit and having a 2:0 score against ROCCAT can destroy hopes for a 3-way tie, so if we don’t get some bigger ties, the Elements win can backfire.

There are far too many variables to even write about Fridays games, as they can either be the most exciting matches or less important ones depending on the outcomes in the first day. If there is a need I can prepare a special article for other (non-tiebreaker) scenarios that can occur or expand on some requested 3-way ties. Thank you for reading 🙂