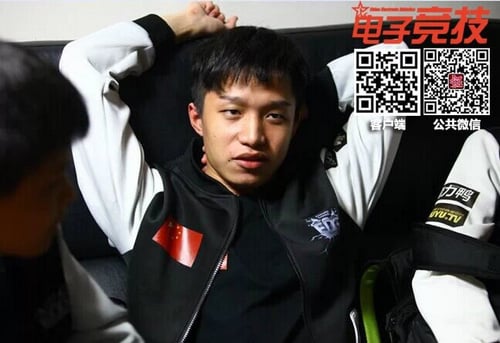 Post-match interview with EDG: To recover from disaster, EDG will go to Korea for training.

Edward Gaming’s group stage games were  really thrilling!  After the game is the first time I interviewed the team. The team needs more understanding and support from the fans!

??Who would have thought that EDG’s group stage would be so scary? They finally made it the Round of 8 after some challenging games. For a team who was unchallenged this year, the night of 9/21-9/22 would be unforgettable. Going from the favorites to the underdog, EDG was beaten [by ahq] but was finally able to win. No wonder team captain FZZF’s first words to the team’s staff were, “After so many years of playing, this is the first time I wanted to cry after a game.”

After the game, ClearLove took a deep breath

At the tournament, ahq had the home crowd advantage. Only a handful of EDG supporters were at the scene, but they came to the stage to support the team before and after the game. After the game, the mood EDG members were complicated. After their victory [in the tiebreaker] Edward Gaming gave a deep bow to the the Taipei fans, the only way to show their appreciation.

As a professional team, they must take the pressure of the public, but they also hope to get more support. They believe that making every effort to pursue the victory is the essence of e-sports.

ClearLove: I feel that we have been recovered from a catastrophe.

??Q: What did you feel after you secured the Baron for your team?

ClearLove: I was so excited that I had already thrown my keyboard. All I could do was say “Nice!” together with my teammates.

??Q: Was that Baron really so critical?

ClearLove: Yes, it is critical. If the other team got the Baron and increased their power, then, the result will not be the same.

ClearLove: I think that there was some impact after AHQ turned the tables against us. We were badly surprised. However, I do believe that we have our own problems. We will have a good post-mortem and we will practice more. Next time when we see the Korean team, the result will not be as embarrassing.

FZZF said: This is the first time I want to cry after a game

Q: What do you think about meeting another Chinese team in the Ro8?

??FZZF: I would rather fight a foreign team, but since we couldn’t make it skill-wise we could only get the second seed from our group. We will do our best training in ten days and have a wonderful game against Royal Club.

??Q: Evaluate your own performance in the group stage?

??FZZF: I think that we did not do well in the group stage. We did not perform as expected due to the team’s condition. I am the team captain, and there is a lot of room to learn and improve. We will try hard!

?Q: What is the training program?

??FZZF: We will go directly to South Korea and begin training.