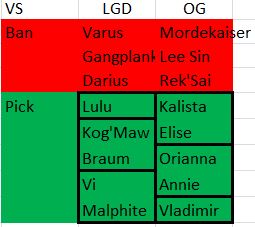 Very interesting picks by both teams. LGD had a standard “juggermaw” comp forming, but then decided to throw in hard engage. The team comp seems super low on damage, but I liked the engage potential against what seemed like a squishy line-up, plus having Vi lockdown Kalista. OG’s comp seemed all over the place. Orianna is team-fight focused, but there wasn’t a ball delivery tool. I suppose she could follow up on an Annie Tibbers’ initiation. Vladimir was picked for laning against Malphite, but I wasn’t a fan of the pick. Playing a squishy line-up against a team with heavy engage seems like a recipe for disaster. OG’s team also lacked any disengage or peel for their carries so if they got jumped on, it would be over. OG wants to pick off LGD while LGD wanted to dive OG. OG’s comp does bring a ton of AOE damage, but picking off a target would be hard against a Lulu.

LGD’s poor execution allowed OG to take the game. Malphite ult rarely landed on more than one target if at all and Vi was almost useless. LGD fell behind early at around ~8:45 minutes in when LGD decides to contest OG’s blue buff. OG did a great job of running away and flashing out of Malphite ult. LGD didn’t simply return to lanes though; TBQ stayed to counter-jungle while in full vision and ended up getting caught out by OG giving away 1st blood. This set LGD behind and allowed Soaz to gain a ton of farm top and pressure the turret. The lead Soaz obtained here allowed him to bully Malphite the rest of the game and became an unstoppable split pushing threat. Soaz did a great job of taking advantage of his split pushing power, but TBQ never punished him by ganking for Malphite despite Soaz pushing to LGD’s inner tower alone. I understand Vladimir is hard to gank and can negate both Malphite or Vi ults with his pool, but something had to be done to stop Soaz. xPeke was also able to win mid lane 1v1 by using his teleport advantage to constantly return to lane with items and full mana to out push the Lulu. GODV not taking teleport really hurt LGD’s global pressure and caused him to lose lane. Imp and Pyl played a great game, but the rest of LGD left much to be desired. Vi didn’t use her ult until 21 minutes into the game and OG consistently flashed out of Malphite ults that were way too predictable. GODV also didn’t seem the most comfortable on Lulu. In team fights, he would ult Kog’Maw as soon as the fight started before anyone even jumped on him. This negates the bonuses of the knock-up and health increase that Lulu can provide if timed correctly. LGD did a good job with vision control this game, always keeping some vision around baron and never being completely blind. LGD gained many advantages, but repeated mistakes, most notably from TBQ, cost LGD the game. TBQ failed to put pressure on the map, failed to pressure Soaz’s split pushing, didn’t use Vi ult until late game, and poor target selection with Vi ult really cost LGD the game. The fight at ~34 minutes sealed LGD’s fate when LGD failed to protect Imp and couldn’t follow up on engages. Malphite arrived late and managed to ult Kalista, but there was no damage to finish her off. Vi ulted Annie again for whatever reason and she was saved by Kalista again. LGD never pressured xPeke in fights which allowed him to land the 4-man Shockwave for a quadra-kill. OG did well in playing to their strengths, constantly having Soaz split push with no answer to his pressure. Mithy also did a great job of making sure to always land his stun onto Imp, even using Annie’s Q to stun in a fight, then using Tibbers just for damage to guarantee that he wouldn’t miss. OG played well, but I would consider this game more LGD’s failures than OG outplaying.

I expected more farm from Soaz considering how much time he spent split pushing. It was clear xPeke was getting the most farm since he was often the one the push out waves quickly then TP to rejoin the team. LGD placed most of its gold on Imp and rightly so.

LGD’s damage is typical of a “juggermaw” comp. The glaring weakness is obviously TBQ and his lack of involvement. He never put pressure on the map and rarely used Vi ult. This also meant that even when LGD engaged, they never had enough to damage to finish off their target making the engage useless. On OG, xPeke shined because LGD completely ignored him in fights.