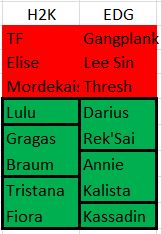 EDG came in with a similar ban strategy as SKT over H2K. H2K made a nice adjustment of banning away Elise where Bengi was the source of most of their problems by snowballing early game. This left up Lulu as 1st pick for H2K, but its fairly obvious Ryu will play it since Odoamne hasn’t really touched the champion. This leaves Darius for EDG. While Darius hasn’t been that effective so far, he is a constant threat with few lane counters. I expected Odoamne to pick Gnar which seems to be Darius’ hardest match-up since he 1st picked it blind against SKT, but he chose Fiora instead. I think the main reason we haven’t seen much Fiora so far is because of the Darius match-up. With so many other strong bans needed, Darius is almost always left up and no one wants to lane Fiora against Darius. Its definitely a skill match-up and Fiora can do well, but only Odoamne willing took this challenge after his Gnar got dismantled by MaRin’s Fiora. The Jungler picks were just trading comfort picks. I liked Tristana for Hjarnan; it seems to be his best champion of late and matches well against Kalista and EDG’s comp. I’m wary of the Kassadin pick, but PawN is a skilled enough player to pull it off.

This game can be summarized by EDG playing to their win conditions and H2K not. H2K failed to group this entire game while EDG consistently picked off loulex and kaSing, roaming together with Clearlove, Meiko, and Deft. EDG seemed well prepared for the match, scouting out that H2K like to invade top side at level 1 and waited in a bush to ambush them. H2K scrambled to get a lane swap afterwards, but EDG was able to match up well. After the level 1 skirmish, almost everyone had blown flash. Loulex still had his flash, but failed to gank any lane. He had an opportunity to gank Darius top when he didn’t have vision, but chose not to for whatever reason. Gragas body slam + flash is a great tool to gank with and loulex really dropped the ball by not putting any pressure on EDG’s exposed solo lanes. EDG’s Bot Lane dominated H2K; the CS disparity wasn’t gigantic, but Hjarnan was forced into buying Avarice Blade 1st item then Pickaxe while Deft already completed BORK. Both supports left to roam to place wards with Meiko arguably roaming more, so Hjarnan was really just out-matched. Odoamne to my surprise actually handled Darius 1v1 very well. He managed to have the lane frozen in his favor and get ahead by 10 CS early game in just a 1v1 lane. Loulex seemed more proactive this game, at least early, without having to fend off an Elise, so great adjustment by H2K with that ban. Ryu however, seemed to be H2K’s biggest folly and played a pretty terrible game. He lost to PawN’s Kassadin in lane, failing to win in CS or put on tower damage, and even got bullied out before Kassadin even hit level 6. He then repeatedly pushed out or farmed lanes with no safety and paid for it with his life. At ~31 minutes, he died mid lane after EDG pushed with baron buff but didn’t recall yet. He then died a minute later when trying to push out top lane. Ryu not taking TP also allowed EDG to press their split push advantage; PawN repeatedly pushed bot lane starting mid game and no one on H2K could deal with him. Even with Ryu playing poorly in lane, if he had TP he could return to lane quickly to keep applying pressure to Kassadin, quickly returning with full mana to always push the lane and whittle down the tower. H2k managed to get the 1st tower of the game; they should’ve rotated Hjarnan mid afterwards with Lulu bot to allow Tristana to push in heavily against Kassadin who has no wave clear. This could’ve pressured mid lane tower and opened up the map for H2K. They may have been reluctant to do this since Ryu had no TP so to send him bot lane may have hurt.  No TP on Ryu meant EDG forced favorable fights across the map or Hjarnan was alone bot lane while EDG won a 5v4 fight. While Lulu is an incredibly strong pick, Ryu did not execute and play her to her potential. PawN’s Kassadin had no business winning mid lane 1v1, but he pressed his advantage by split pushing bot lane then teleporting around the map. I still don’t think Kassadin was a good choice for picks and bans, but PawN played really well and Ryu underperformed pretty hard. EDG did a good job of contesting blue buff from H2k and repeatedly denied it from Ryu even at the cost of a lost fight. Without blue buff, Lulu isn’t able to bully Kassadin as hard and allowed PawN to come out strong. EDG had a great 3-man roaming group with Clearlove, Deft, and Meiko that consistently caught out loulex or kaSing when they tried to get some vision control back. H2K didn’t group like EDG did, with loulex and kaSing warding separately rather than together, allowing EDG to pick them off. H2K made improvements in with Odoamne and loulex from their game against SKT, but Hjarnan and especially Ryu played exceptionally poor this game. Great game by EDG with PawN and Meiko leading the way.

Even gold distribution for both teams. Hjarnan should’ve had a higher percentage to be effective, but he underperformed in lane. Odoamne’s Fiora was H2K’s only real advantage, but AmazingJ did well in keeping even in lane while the rest of his team was gaining advantages.

PawN was the clear leader, but Meiko deserves big props for handing EDG just about every kill they got. Hjarnan’s pathetic damage output shows H2K’s inability to group and getting dragged around the map by EDG’s split pushing.

EDG seemed to dominate ward control and the number of wards shows it. After Meiko got deep vision in H2K’s jungle at ~7:40 minutes in, EDG retained vision control around dragon throughout mid game, then shifted it to baron control the remainder of late game. H2K couldn’t get vision control back as loulex and kaSing repeatedly got caught out since they wouldn’t roam together.