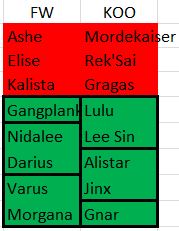 With target bans, many “OP” picks were left up making for very interesting comps. FW wanted to get Gangplank and Darius who are both strong, but leaves the team susceptible to being kited. Nidalee also lacks synergy with them as none of them have CC, but her early game may prove useful. Karsa got heavily denied this pick/ban phase. Three jungle bans along with Lee Sin being denied means Karsa had fewer options this game. His other most played picks are Nidalee and Ekko. Neither matches his solo laners, but Nidalee’s strong early game means he won’t get bullied by Lee Sin. FW rounded out the team with Varus and Morgana to assist the solo lane picks. Varus and Morgana were the best picks to helping out the solo lane selections. KOO drafted a “jugger-Jinx” comp with a big front-line. All of their picks have some zoning potential and can make it almost impossible for juggernauts like Darius to get in. I love the Jinx pick for the long range auto-attacks and chompers zoning. Overall great drafting by KOO to get their most comfortable comp and heavily deny the enemy Jungler.

KOO dominated the early game with Kuro leading the way. The early blue buffs made mid lane suffocating for Gangplank with relentless pressure. While Karsa didn’t have much impact early game, he did a great job helping his solo lanes by relieving pressure and help push out their lanes to keep them from being overrun. Despite Maple’s struggles mid, FW did a good job of just holding the side lanes. I was especially impressed with NL keeping up in CS with Varus while under his own tower and starting with Tears + Pickaxe. He also did a great job of landing Varus ult which is a hard skill to land. KOO did a great job individually throughout the game by being able to dodge skill shots until late game when the CDR caught up for FW. I liked KOO’s strategy of getting early boots and upgrading it just for the movement speed to dodge the skill shots. Despite being down early, FW always did a good job of keeping up vision throughout the game, even getting deep vision in enemy jungle. This allowed them to spot out flanks before they happened and minimalized their losses. FW started to turn the game around around ~16 minutes into the game when KOO took down FW’s bot outer turret, the FW countered by SwordArt’s Morgana flash ult. They got a kill on Smeb that probably could’ve been prevented with a canceled TP, but this allowed FW to group together and siege for the first time, granting them their own bot outer turret taken. They followed this up by taking dragon and zoning away KOO with GP barrels. KOO’s main downfall began at ~26:15 when KOO attempted to bait baron then engaged. Despite having no disengage, FW always positioned well with Steak in the front and everyone else behind. With only Steak available, GorillA used Alistar combo on Steak only, but the follow up poke and zoning from GP was too much for KOO to deal with. KOO didn’t all go in together; Hojin did nothing that fight and wasn’t able to kick anyone back, GorillA was caught off guard by GP’s damage and didn’t manage to use his ult, and Smeb went in without full rage bar. KOO tried making the right plays and made good attempts to flank to get back into the game, but Smeb consistently engaged without full rage on Gnar leading to lackluster fights. This, coupled with Hojin’s inability to get in and SwordArt’s great Morgana shield timing on Steak to prevent Alistar combo, meant KOO never reliably engaged onto FW and only caught out Darius and never the backline. KOO repeatedly honed in on Darius and let GP run rampage in team fights. Poor focus by KOO allowed FW to win fights despite not having disengage. Karsa also did a great job of singling out PraY in team fights and made sure he took him down. I’ve been super impressed with SwordArt’s play these first 2 games and liked the Zhonya’s rush onto Morgana who needed to zone for his backline. Steak has performed well and has a surprising ability of getting the enemy team to only focus him while his team makes plays. Great strategy by FW coming into the game and playing to NL’s strengths.

Karsa on FW gets a larger portion of gold as Nidalee since she’s a carry Jungler. Pretty even distribution for both teams. PraY gets the majority on KOO since he’s the star of the comp; Maple gets the most on GP due to his fast wave clear and GP’s passive bonus.

For FW, I thought Nidalee’s damage might be higher, but it just shows how well Maple and NL played. For KOO, of course Jinx has the majority of damage, but Hojin’s Lee Sin hardly participated at all this game. He made no plays early game and had little to no impact in team fights. His greatest contribution was getting Lulu blue buff the entire game.

Even when FW was down early game, their vision control never let up. They also did a great job of controlling vision around objectives late game when they had the lead, making it easier to land poke from the fog.