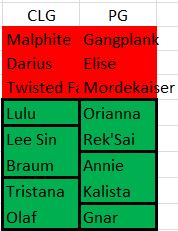 It seems the few games Lulu sneaks through bans, she’s always played mid lane since Top Laners play juggernauts. She isn’t really a flex anymore, but she’s still a safe, well-rounded mid laner. CLG got a lot of comfort picks, most notably Tristana for Doublelift and Olaf for ZionSpartan so good drafting by them. They have banned Malphite 2 games in a row for no real reason other than trying to avoid hard engage; PNG counter this with Kalista + Annie.

CLG’s dominate vision control and teamwork was no match for PNG. Another game with a crazy level 1 fight. Surprisingly CLG pulled out on top despite Annie landing a 3-man stun. PNG’s Bot lane did pretty well early game and was able to zone out Doublelift from some CS. CLG simply lane swapped once DL had enough for BF sword, got a kill on Gnar, and took bot outer tower. SirT spent most of his time ganking for his Bot Lane, but Aphromoo did a great job of negating ganks with Braum’s shield. Xmithie meanwhile ganked for ZionSpartan, but never amounted to much. I have been super impressed with Pobelter’s play so far at Worlds and he plays Lulu to her max potential. From the beginning of the game, he abused the level 2 power spike to bully Kami in lane and never let up. He spent the gold from the level 1 fight on wards for his team and was still able to dominate mid lane. PNG couldn’t keep up with CLG’s strong rotational play early game where they send Rush Hour to take every outer tower. After taking the last outer tower, CLG made a great collapse onto PNG after they responded with a tower trade at around ~13:20 minutes in. Aphromoo consistently had great Braum ults that landed on multiple members, so this was the first of many that led to CLG winning team fights. These kills allowed CLG to take inner towers and accelerate the mid game where they have traditionally struggled. CLG did a great job of following this up by maintaining deep vision control in PNG’s jungle and pressuring the entire map with 1/3/1 split pushing. CLG was much more decisive in their calls this game and even made great double TP ganks. They looked much improved from their first game even if it was against easier opponents. CLG’s suffocating vision control meant PNG constantly had to face check for baron which CLG rarely attempted and simply used to force fights repeatedly. PNG played a decent game, but the vision control led to bad decision after bad decision. Kami was PNG’s biggest weak point this game as his score showed. He was bullied in lane by Pobelter then always the one caught out in team fights. Mylon was often late to fights, but overall did a pretty good job of having Gnar bar in the right spot for fights. Dioud did a great job of always focusing Doublelift in fights, but the team could never follow up since Kami was always on the retreat. Great game by CLG with impeccable vision control and decisive shot-calling.

Typical CLG with Doublelift leading the way. PNG was similar, but their positioning for team fights was lacking. Aphromoo soaked up a ton of damage with Braum’s shield to keep Doublelift alive despite some good engages. No one was able to stop Olaf from wrecking PNG’s back line. PNG got many members of CLG low, but couldn’t pull off kills in fights.

CLG purchased 20 pink wards vs PNG’s 14. Pobelter bought 6 pink wards himself, as much as Aphromoo, showing how much of a team player he is.