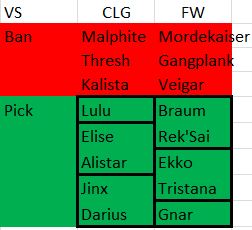 I’m not a fan of FW banning Veigar and leaving Lulu up for first pick. They also chose Rek’Sai over Elise, which is fine for player preference, but makes it harder to survive early game. Both Bot Lanes are pretty much the same. I’m unsure of the Ekko pick. Its great that he’s a flex pick, meaning he could do decently against Lulu whatever lane she went. The fact that he’s melee makes me not like the pick; he already saw Alistar and Lulu on the other team, so I’m not sure how he would be able to get in and kill a target. Any ranged AP champion with decent wave clear may have worked out better. CLG got away with numerous strong picks, but no overall synergy for the comp. CLG could’ve taken Tristana in their 2nd picks since its Doublelift’s go-to ADC (7-0 W/L in Summer split + playoffs); with Braum already shown as the opponent Support, they didn’t need to rush the Alistar pick unless they just wanted to know match-ups first. While I don’t think Darius fits CLG’s comp that well, given the situation he was a good blind-pick option for Top Lane since there aren’t really counter-picks.

Despite CLG winning, it felt like FW played a better game. CLG had a great start by setting the Karsa behind in the jungle and Steak down in CS through repeated ganks. Xmithie took advantage of Elise’s early game and set up ZionSpartan with an advantage top. Unfortunately the repeated ganks failed and also allowed Karsa to catch up in farm. Karsa and SwordArt took turns helping out Steak by ganking for him and actually got Steak ahead by mid game to prevent any snowball by Darius. To me, It seemed SwordArt was the MVP of the match. He roamed to get deep vision in CLG’s jungle which allowed Steak to farm safely top, he ganked for Steak top lane for successful tower dives, he constantly defended turrets against CLG’s siege using Braum’s shield and delayed their global gold, and he was great in team fights making sure to land Braum’s ult on Doublelift for disengage. I was really impressed with how FW handled the early deficit and made attempts to get Steak back into the game. Kkramer did a good job laning 1v2 and keeping up in farm. FW had great lane swaps, leaving Tristana mid because she has the most wave clear to defend the turret and also allowed her to farm safely since Braum roamed, having Ekko farm the side lanes, and Braum/Rek’Sai helping Gnar. FW also had great dragon control throughout mid game. In my opinion, CLG’s biggest weakness is mid game. They rotate well early game to get all outer turrets down, but lack direction afterwards. Doublelift picks up all the farm in side lanes while ZionSpartan attempts to defend the opposite side lane. Aphromoo is stuck by DL’s side ensuring he can farm safely, meaning he isn’t available to roam or get vision. ZionSpartan was falling behind and Xmithie just farmed the jungle. CLG’s vision control wavers mid game and most vision is used defensively. Xmithie could’ve pressed Elise’s early game strength by challenging Karsa 1v1. CLG did a great job on capitalizing on Kkramer’s late game positioning and used the numbers advantage to bait baron into further kills. This one mistake late game for FW spiraled out of control leading to repeated bad situations. FW could have defended the CLG late game counter push mid much better where Kkramer got caught out. It looked like Steak was going to go split push, Braum was off to the side, and Karsa went back to farming the jungle – and they realized too late that CLG was pushing. Great job by CLG taking advantage of FW’s poor positioning and lapse in judgement.

Its very obvious CLG places all the emphasis on Doublelift and ZionSpartan gets the scraps. Doublelift consistently gets side lane farm while ZionSpartan is just supposed to defend the opposite lane while it gets pushed back towards them. Both Junglers had fairly large portions of gold, noted by both their offensive builds. Overall gold was pretty even throughout the match; however the item builds led to some disparities. I think Phantom Dancer 4th item on Tristana was a bad choice where BORK or BT would’ve worked better. Both supports also didn’t prioritize Zeke’s Harbinger which is crucial for “Juggermaw” comps.

This game was truly about the ADCs. CLG gave Doublelift priority on farm and it shows with his 48% damage output. Jinx’s long range was crucial against a mostly melee team. ZionSpartan did a great job of front-lining and appearing threatening despite not getting much farm. If Doublelift had died in any of the team fights, I think CLG would have certainly have lost. FW had a lot of melee champions that were fairly even in damage output. While Maple may have had the least amount of damage, his zone control using Ekko’s stun, Q, ult, and Zhonya’s froze CLG’s DPS for its duration, allowing his teammates to pick off CLG’s front-line.

Statistics pulled from leagueoflegends.com match history and gamesoflegends.com. All credit goes to them.