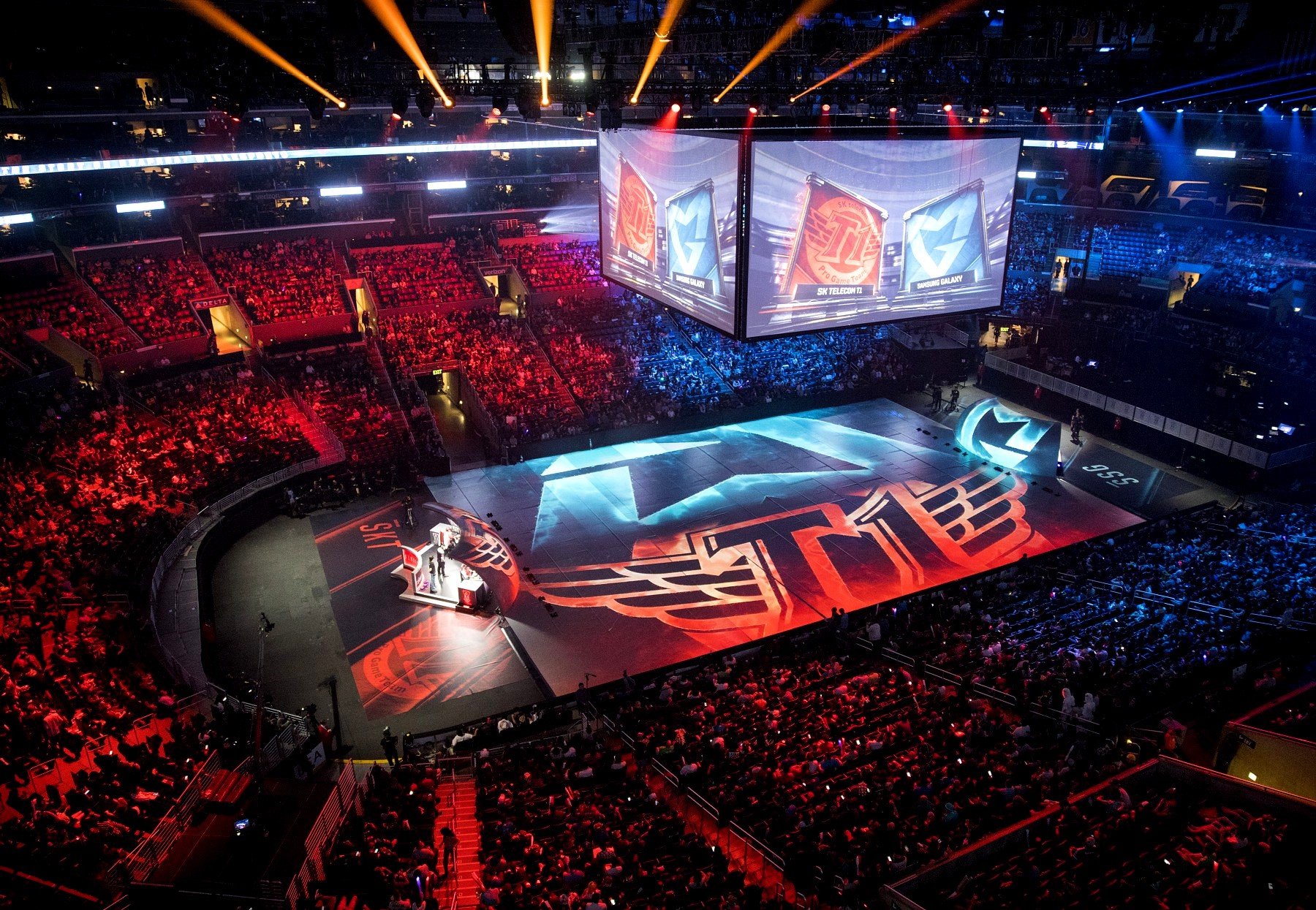 Esports is no longer the future, it’s the present. Games like League of Legends, Dota 2, and Overwatch are selling out storied sporting venues across the globe. Watching players like Lee “Faker” Sang-hyeok and Soren “Bjergsen” Bjerg face off is one of the most exciting experiences in all of sports.

But in many ways, esports is stuck in the past. And that’s most notably true in League of Legends. Friction between teams, players, publishers, and producers has built over the last several years, and it is coming to a boiling point. The parties are trying to settle an age-old question: How do we make money?

One group we haven’t heard as much from, at least publicly, is the players. Instead, they’ve spoken by hanging up their mice and keyboards. Popular players like Christian “IWillDominate” Rivera and Michael “Imaqtpie” Santana chose to leave the professional scene and focus on streaming and content creation. Yiliang “Doublelift” Peng is the latest star to follow that trend.

But that shouldn’t be the case. Players shouldn’t have to choose between professional play and streaming.

The economics of playing League

Players leaving because they get burned out, or can make more money elsewhere, isn’t good for the sport. These players are not past their prime, injured, or otherwise unable to compete at the highest level. Doublelift had a tough Worlds, but was still the best ADC in North America during the Summer Split. And many of these players aren’t quitting the game?—?instead, they’re playing for themselves rather than for their teams.

The reason? Streaming. The best LCS players can make several times their professional salary through streaming and content creation. Platforms like Twitch and YouTube are becoming major revenue sources for all sorts of players, particularly ones with a professional pedigree.

And the streaming life is far superior than the one they face as a pro gamer. They set their own hours. They can take breaks, even days off (gasp!). They can be creative with how they play the game and how they present their personalities. In fact, creativity is required to develop a large audience. Altogether, it’s a more sustainable profession than that of a pro gamer. In his interview with Yahoo, Doublelift explained how much it would mean to him to have a life, something his professional career does not allow.

Riot has adamantly stated over the years that it is not making money from League of Legends esports. The teams, even storied ones like TSM, claim the same. But Riot receives benefits from professional League through increased exposure to their game (the company made an estimated $1.6 billion in revenue last year). For Riot, it’s marketing. And the teams are increasingly being backed by financial interests who see more revenue down the road. There is no opportunity cost for them; investing in a League franchise does not preclude backing teams in other sports.

The only group facing large opportunity costs now without assurances are the players. The average esports playing career is short; so is the average lifespan of a game. Given those short time horizons, it’s unreasonable to ask players to devote year after year to grueling professional play while ignoring more lucrative options.

If you were a North American player with only a few short years of earning potential, would you spend it trying to win Worlds (highly unlikely) or earning as much money as possible?

An example: Assume a player can make $100,000 a year as a pro (salary only) or $200,000 a year as a streamer. These are figures used for simplicity, but have been confirmed via numerous industry sources to be in the general ballpark of real salaries. And let’s say this is accomplished in a 70-hour work week, far less than what many pros already put in.

The question: How can the team bridge the gap between the $100,000 pro salary and the $200,000 a streamer can earn? Obviously, increasing pay for pro players is an answer. Popular caster Christopher “Montecristo” Mykles promoted the idea of increasing player pay in a recent interview where he described the trade-off between professional careers and streaming as “tragic.” Pro teams can work with Riot to create greater revenue opportunities for the league along with stronger revenue sharing partnerships, with the benefits flowing through to player salaries.

Teams have already indicated their willingness to work with Riot to resolve some of these concerns. But if history is a guide, this change will be slow and incremental. And it ignores a possible short-term solution.

Another option is to split the player’s time: 35 hours a week streaming for $100,000 in streaming revenue. The remaining 35 work hours would be devoted to the team, which would pay another $100,000. The key: can teams be successful if they only have 35 hours of time with the players each week?

Assuming five days of practice, teams have seven hours per day to work with their players. This doesn’t sound like a lot in esports, but in the context of traditional sports, it’s an immense amount of time. Teams can schedule multiple three hour scrim blocks or take more time to work on theory and VOD review.

This isn’t a groundbreaking idea. In fact, most pro players already have streams and many teams have former players streaming on their brand. The difference is that instead of something players do on the side, teams should make streaming a focus and key component to player comp.

They need to make streaming a core part of their value proposition.

Wouldn’t this hurt the teams?

The reason teams don’t do this is partly because of the immense pressure they feel to spend time scrimming. Teams see how much others, especially Asian teams, practice, and so they engage in a constant cycle of practicing more and more. The Red Queen effect, an evolutionary hypothesis that describes how organisms must constantly struggle and adapt just to survive, has sucked teams into a never-ending cycle of more and more time devoted to practice.

Another factor is the Korean model. Korean teams are known around the world for intense regimes where players practice around the clock. But this reasoning is flawed in several ways. It’s highly unlikely that Western teams will defeat Korean ones by replicating the Korean model. Almost every Western player or organization that has tried to take on that model by going to Korea has failed. Team Liquid’s failed bootcamp last summer was just the latest example.

There are aspects of Korean gaming culture that should be copied, but this is not one of them. There are also other factors in the Korean model that make those teams successful, aside from the practice environment. The overall culture is much more professional in that region; esports are on major broadcast channels and there is a government regulatory body dedicated to the games. And teams in the Western regions aren’t equipped to support their players in the pursuit of that practice philosophy, even if it’s the players that desire it.

Teams in traditional leagues have figured out the balance and have learned how to practice smart.

This devotion to practice is perhaps best exemplified by TSM. Over the last six months, TSM has eschewed nearly everything in a singular devotion to practice, with the aim to win Worlds. They tried to schedule as many scrimmages as possible. And as the league leaders, they faced no shortage of practice partners.

It was a novel strategy, and to be fair, a laudable one. It was fascinating to watch a team go all-in like that. And the results spoke for themselves: an incredible run through the Summer Split, the best North America’s ever seen.

TSM took a brave step, a necessary step even, but it wasn’t the right one. Regardless of the outcome of Worlds, it became clear that their high-pressure environment wasn’t healthy for the players or the team. Doublelift spoke candidly about being burnt out during the split.

That is something that just doesn’t happen in traditional sports. Instead, teams tend to start each season with a intense training camp to build fitness, then taper their practice schedules as the season goes on. They do this partly to avoid injury. Guess what? LCS players face injury too! Fatigue and burnout?—?those are injuries. So are the wrist and back problems endemic to the sport and are directly linked to the amount of time spent practicing.

Teams in traditional sports know that in order to finish strong, they can’t beat up their players in practice. That’s not to say that in-season practices aren’t essential, or even painless. But teams in traditional leagues have figured out the balance and have learned how to practice smart.

How practice should function in League esports

How can LCS teams practice smarter? First they need to change the content of the practices. Instead of playing against competing teams, they should have in-house scrims against substitute and practice players. The practices should not be scrimmages but focused on scenarios and repetition. Think of NFL team practicing third down situations or a basketball team practicing half court sets. Riot’s new practice tool should help with this.

Outside of practice, teams should encourage and enable players to stream and pursue other revenue opportunities. They should also encourage players to have balance and give them time off. To be clear: Players should not be discouraged from practicing and honing their mechanics. But there is such a thing as too much practice. The players often don’t know where their own limits are. Things like physical and mental fitness will pay dividends over the long run. After all, the players are real athletes.

Professional athletes across all sports who walk away before age or injury often cite a common reason for leaving: the daily grind wore them down.

But for these changes to stick, teams need to evolve on a more fundamental level at everything not related to practice. They need a robust streaming setup so that players can be efficient on the other proposed aspect of their jobs. They need to separate player personality management and technical League coaching into two separate entities to avoid breaking points.

They need a more analytical way to evaluate coaching. Many teams lack the necessary infrastructure to support their very young players. Every team should be scouting other regions, especially the solo-queue fertile Korean region, for talent. Many basketball fans know who the top 100 high school juniors are in America— is the same true of League fans and Korean solo queue?

Finally, the very structure of the LCS needs to change to be more supportive of players. Relegation prevents teams from trying new things and perpetuates the Red Queen Syndrome. A lack of professional representation for players makes for extreme swings in the power dynamic between players and their teams. And an unclear roadmap to earnings stability makes it difficult for businesses to invest in LoL esports infrastructure.

The future of League esports hangs in the balance

Professional athletes across all sports who walk away before age or injury often cite a common reason for leaving: The daily grind wore them down. These players would love to fight with their teammates and compete for championships. But they can’t take the day-to-day anymore. Doesn’t that sound like Doublelift?

TSM will survive the loss of Doublelift. So will League esports. But it’s not just him. It’s a whole class of players who have given up on the professional scene and a whole class of new players that will never start. Riot talks all the time about player welfare. It’s time to put money behind those promises.

Esports is the now. But it has a lot of growing up to do.