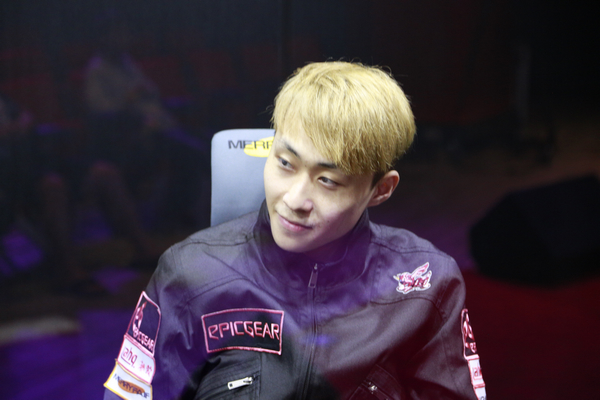 Chou “AN” Chun-An, also known as OhReaL in the past, has been playing competitive League of Legends in Taiwan since January of 2013. He has gone through three role swaps, transitioning from the jungle, to the mid lane, and now to ADC. Despite several role swaps, AN has remained one of the most talented players in Taiwan.

AN’s career began as part of Garena’s desire to form a sister team to the Taipei Assassins, where he would become the jungler of the first iteration of the Taipei Snipers. Like the other players on the Snipers, he was brought aboard as a sub for TPA until they figured out the final TPS roster. His first performances with the Snipers were relatively good for a rookie player coming in.

AN’s first big tournament would be the Gigabyte StarsWar League, an online tournament that featured different Asian League of Legends teams. He showed a very large champion pool in group stages, playing seven different champions, with his most notable performances on Elise and Kayle. AN possessed a very strong sense of target priority and seemingly could hit any skillshot that he needed to. Although very talented, his team could not overpower the likes of WE and still finished behind iG for third in the group, while finishing ahead of NaJin Shield and SKT T1. TPS would eventually exit the tournament at 5th/6th, after being defeated 2-1 by MakNoon’s NaJin Sword.

AN continued to show his merit in the 2013 Taiwan eSports League, where the Snipers dominated the opposition, going 20-5. AN began to refine his jungle and gank pathing, becoming more efficient with his time and raising his status as a jungler in Taiwan. He was front and center at the Taipei Snipers’s early success. At this point, many likely would have considered him the best jungler in Taiwan, but that would eventually come to an end at Season 3 Taiwan Regionals.

AN maintained his level of dominance at S3 regionals, as TPS went 9-1 in their group, dropping their only game to the Winds-led Gamania Bears. AN and TPS blew through the bracket stage, making it easily past ahq e-Sports Club and Wayi Spider to reach the Grand Finals. They would eventually be met by a hot Gama Bears team, having run the whole Loser’s Bracket to Grand Finals. TPS’s dominance would end here. AN was consistently outmatched by Winds, who had more creative jungle pathing, and even better mechanics to boot. AN had been completely dismantled and TPS the same. The dark horse, Gamania Bears, took the series 3-1 against the Snipers, stealing AN’s chance at Worlds.

AN would be replaced by the very jungler that exposed his play, Winds, when the Gamania Bears dropped their roster after Worlds. While AN got to slip in for GodJJ in a few games, on Lucian, he was mostly unplayed and relegated to bench warming in favor of the genius jungler. However, AN would have another chance to prove his mettle, in his first full time role swap once NeXabc chose to step down from the mid lane.

In his new position, AN could show off his mechanics from a carry role, one that he embraced. As skilled as AN was as a mid laner, he was also cocky. He had a tendency to be over aggressive  and misposition as a mid laner. However, he was a general plus in the mid lane due to his innate teamfighting abilities and strong mechanics, over NeXabc. His champion pool was as wide as his jungle pool, seemingly able to pick up any champion and perform well on it.

AN’s individual play was solid and certainly an upgrade over NeXabc, but he didn’t fill the role TPS required, as they aspired to be the best team in Taiwan. GodJJ, Zonda, and Winds, were generally at the center of TPS wins and the formula worked well. TPS needed a safe, facilitating mid laner in AN. Instead, they got an aggressive playmaker that loves to teamfight, but can also lose the game for his team at any moment. TPS wanted AN to be a piece of the puzzle, but he simply didn’t fit into their ideal image.

Because of this, AN never looked particularly comfortable in the mid lane. While he had games that he would go off and carry, he also had games where his impact went completely unnoticed. Unfortunately, despite his ability to have big games for his team, he never developed as a mid laner. He never developed his own style, he played a slew of champions and never seemed to have a primary goal. Whether or not this is his fault or the Snipers, it was a weight on AN’s career as a mid laner and on the Taipei Snipers.

Unfortunately due to a lack of synergy between teammates, the team dissolved and was relegated to only playing in the LNL, and to make matters worse, Winds was moving up to the Taipei Assassins. AN dominated opposing mid laners in the LNL with his superior lane mechanics, being a strong force for TPS dominating in the LNL, going 13-1. It almost seemed that TPS was having some sort of renaissance, utilizing AN very effectively. AN began to lead the charge with his team matching his aggression, similar to Maknoon on Sword, but it was short lived. Thin competition made this easier to pull off and was not sustainable in the Regional gauntlet.

AN’s performance was lukewarm at best against the likes of Saigon Fantastic 5 in the gauntlet. Not only did TPS have a tougher time playing around AN in this series, but he wasn’t playing particularly well, to boot. Without much impact from any player  in the series, TPS would become just the second Taiwanese team to ever lose a bo5 against a SEA team.

ahq, with many of its longtime players choosing to retire, had the foresight to acquire talent before their run at Worlds. Shortly after TPS’s disappointing year, the team was acquired under the ahq e-Sports Club banner, signaling the next stage of AN’s career. AN became part of the rebuilding project as he was selected from the TPS roster to take over the ADC role for the main team.

AN in the ADC role was a match made in heaven. While he had to learn the intricacies of a laneswap as an ADC, he was inherently more comfortable in this role than he ever was in the mid lane. He even looks more comfortable than his time in the jungle role. While in the spring split, he had Imp-like moments, where he decided to randomly front line, he showed a great ability to output the most damage possible in a teamfight. His ability to hit and dodge skill shots also remained stellar, being even more useful as an AD carry. His mechanics and teamfight sense fit his new role perfectly and AN was finally being utilized correctly by his team.

AN really only had to work on early dragon fights and his own champion pool, as he grew to learn a new position. He had continuous growth over the course of the split, that he never did show in his prior roles. AN’s subtle improvement combined with a new frontline tandem of Mountain and Albis toward the end of the split, made for ahq’s miracle gauntlet run from fourth to first. ahq played around AN over the course of playoffs, snowballing the bot lane and being rewarded well for the investment, in both Dragons and damage from the AD role.  AN finally found his meaningful first place playoff finish, being a large component of it all, with his excellent positioning in the new cinderhulk meta, as they ran the gauntlet with a record of 9-1.

AN continued to show good form at MSI, performing well with Albis against bot lanes from the other major regions. He did show erratic positioning at times, but overall had himself a good tournament, as ahq unexpectedly did. AN looked to maintain his current form, coming into the Summer Split, and did just that as ahq was an absolute machine for the majority of the split. AN reigned in his positioning and began to play more conservatively, although still being crazy at times. AN’s champion pool also improved, as he played eight different AD carries during the split, playing them all at a high level, with the exception of a few whacky Vayne games. His arguable remaining  weak point had been his laning with Albis, but as the bot lane spent more time together, and Albis improved, they became the best 2v2 bot lane in the LMS, constantly leveraging CS leads.

AN’s dominance did not cease in the playoffs, as he was miles ahead of GodJJ in the laning phase, effectively neutralizing him in every game of their series against HKE. While Westdoor was the primary carry in this series, AN did his job and did it well, as they secured the 3-0 and a ticket to the 2015 Season World Championship. Despite all the setbacks and role swaps in AN’s career, he will finally have an opportunity at Worlds, having proven himself as the best AD carry in Taiwan. AN went from a puzzle piece that didn’t fit on TPS, to the very center of ahq’s game. While Westdoor will almost certainly soak up the spotlight, AN will be firing from the backlines, carrying ahq e-Sports Club to victory.