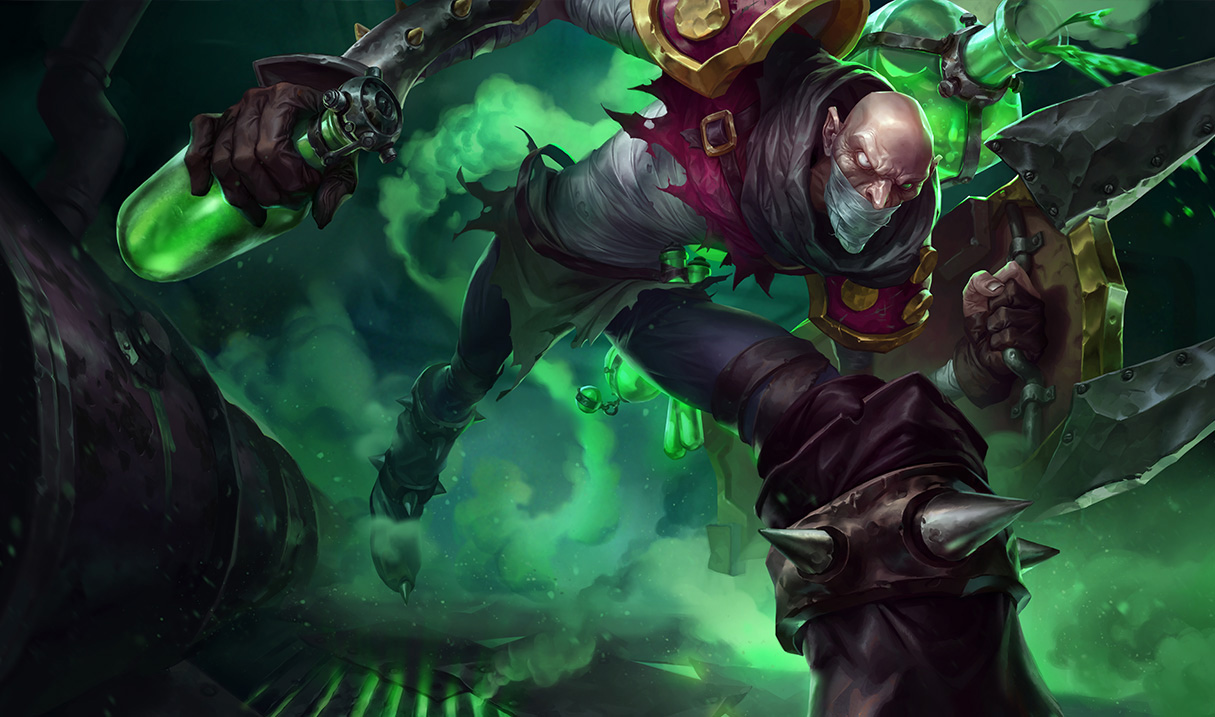 Imagine a world in which Nunu and Singed are so strong that Riot has to push out emergency nerfs, because the situation is so dire that it can’t possibly wait for the next patch. Believe it or not, that’s our reality. That’s the nightmare that we live in, and it’s horrible.

But what happened to turn these formerly useless champions into absolute solo-queue-destroying monsters? For Singed, a lot happened.

The first rule of League of Legends

Never chase a Singed. Everybody knows that, right? It’s the rule that all of your teammates feel the need to tell you after you’ve already died to Singed once or twice, because their hindsight tips really help you out the most after you’re already dead. Try not to think about it too much.

Anyway, Singed and his “never chase me” rule have been a well-known staple of League since the beginning of time. Or, at least, since the game started in 2009. He emits a poison cloud from his back everywhere he walks, and once he builds a Rylai’s Crystal Scepter, you’re never going to catch him anyway. He wants you to chase him, and that’s exactly why you’re supposed to avoid it. The problem, though, is that you can’t not chase him anymore. See, Riot replaced his passive ability in last week’s patch. The new passive now gives him a huge burst of movement speed whenever he nears a champion, so even if you’re trying to run in the opposite direction, he can still get in front of you.

Before you know it, you’re dead, and your teammates are flaming you for chasing Singed even though that’s exactly what you were trying not to do. Oh, and Riot also buffed literally all of Singed’s abilities on top of that. More damage on his poison, a ground on his adhesive, and more boosts from his ultimate are the cherry on top of the nightmarish cake that is the new Singed. After hearing all of that, it’s no surprise that he was the victim of an emergency hotfix nerf following the patch.

His health, health growth, and ultimate ability cooldown were all nerfed, so he’s a little easier to kill. He’s not easier to get away from, he’s just easier to kill. So now, it might be possible to bring him down with your last dying poison-choked breath. Overall, these nerfs aren’t that severe, and Singed’s newly spiked playrate will likely stay relatively high.

Nunu, on the other hand, has been OP for a while. It’s only been a month since he was the strongest champion in the entire game—if you consider the fact that he won more games than any other champion as a good indicator of that. Before this patch, he still won more than any other jungler, at least. This was bad, considering Patch 7.13, the patch just before last week’s, had dished out nerfs to him.

Those nerfs clearly didn’t do enough, so we were all very disappointed to see that Patch 7.14 didn’t include any nerfs to him at all. Well, at least those doubts weren’t long for this world, because Riot decided to throw down some nerfs shortly after the patch went live, when it realized he was still so strong.

The nerfs hit Nunu’s tankiness, which apart from some slows, is really what gives him his identity. That being said, these nerfs hit him pretty hard. He dropped from the most winning jungler to the fourth most winning jungler, according to League stats website Champion.gg. This isn’t that big of a drop, but we’ll take anything at this point. Nunu’s reign over the jungle has gone on long enough.