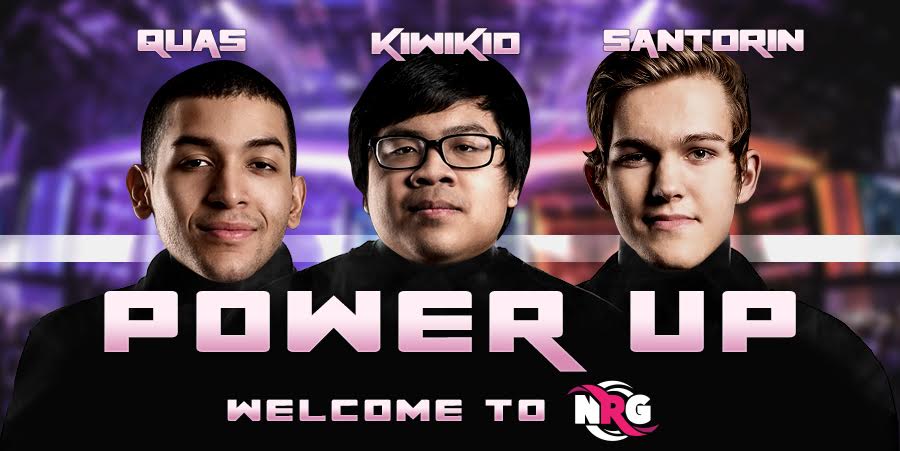 On April 26, ESPN reported that NRG Esports has added top laner Diego “Quas” Ruiz, jungler Lucas “Santorin” Larsen and support Alan “KiWiKiD” Nguyen to their lineup. In a statement to ESPN, NRG CEO Andrew Pruett cited these player’s veteran statuses as the primary reason for their additions to the team. NRG finished their first North American LCS regular season in 5th place and would go on to drop out of the playoffs in the first round. Moving into the 2016 Summer Split, Korean superstar mid laner Lee “GBM” Chang-seok will be the only NRG player to remain on their roster, a change that Pruett hopes will, “improve the communication on the team”.

After a split of using rookies still trying to define themselves on the LCS stage, NRG has decided to go with players who are known and tested quantities. Throughout his two year tenure on Team Curse/Team Liquid, Quas proved himself to be one of the most well-respected top laners in the NA LCS and, despite their sometimes poor reputations, both KiWiKiD and Santorin have played in the LCS playoffs with well-defined gameplay styles.

With Quas joining franchise player GBM in the solo lanes, neither KiWiKiD nor Santorin will be asked to star on the revamped lineup. Rather, the keys to NRG’s success this Summer Split will be their ability to properly integrate Quas and whether or not their newly acquired role players are able to fit around the team’s solo-lane oriented identity.

Of NRG’s new acquisitions, Quas easily fits into the star category, a move in-line with NRG’s previous ideal team construction. Their original top laner Jung “Impact” Eon-yeong was brought in to play a carry role similar to his time on Team Impulse. But he was unable to channel his previous season’s success with the inexperienced Galen “Moon” Holgate in place of his previous jungler, 2015 Summer Split MVP Lee “Rush” Yoon-jae. With Impact’s recent departure to Cloud9, NRG is hoping that they can find new success with Quas in the top lane.

Quas’s game has distinct strengths and weaknesses different from that of Impact’s. While Impact was an above average laner, Quas is notably better, managing to snowball lanes even in the tank matchups he last played on Team Liquid. Quas is also a formidable 1v1 duelist and split pusher, and was able to leverage his lane advantages into sizeable pressure for his former squad. However, Impact’s Teleport play and teamfighting were much better than Quas’. In fact, Quas’ inability to flank with Teleport played a large role in Liquid’s inability to successfully teamfight in Season 5. Team Liquid’s devotion to teamfighting often hamstrung Quas. If NRG wants to get the most out of their newfound top laner, they will need to focus on his split pushing ways.

Quas has also been historically known for his odd champion pool, including off-meta Poppy and Swain picks during his time as an amateur. On Team Liquid, however, the Venezuelan top laner often found himself relegated to standard tanky champions. Part of NRG successfully playing around Quas will involve leveraging his unique champion pool to catch opponents off guard. NRG could very well find an identity built around outdrafting opponents with a focus on Quas and GBM, another player famed for his own quirky picks.

The Quas pick-up is one with a lot of potential. But NRG will have to focus on adjusting their system and giving Quas the resources he needs. It’s easy to imagine a GBM and Quas focused NRG taking the league by storm; but if NRG defaults to a teamfight focused approach, Quas will likely look very out of place, as he did on Team Liquid.

Although Santorin received a lot of praise for his strong start to his TSM career. While he was on the North American squad, TSM won both the IEM Season IX – World Championship and the 2015 North American LCS Spring Split. Unfortunately, his extremely indecisive play during TSM’s disappointing summer split soured the community’s opinion of him. Santorin’s subsequent productive time on Huma suggested a hopeful resurgence for his career. But his inability to maintain this success when placed into a new environment on Ember reminded fans of his notable weaknesses.

When Santorin is on a team that gives him a straightforward role, such as ganking a skilled carry laner, he is often able to play successfully. In fact, Santorin’s initial reputation as one of the most skilled junglers in the challenger scene on the 2014 Team Coast lineup was built on camping Brandon “DontMashMe” Phan lane. Santorin was able to enhance Mash and Sheep’s already notable success against overmatched challenger bot lanes.

When Santorin moved to TSM, his ability to enhance Bjergsen’s lane dominance was demonstrated on a larger stage, receiving quite a bit of praise. But when TSM attempted to diversify their jungle strategies in the next split, Santorin was unable to find the same success in a more complicated role, especially since he wasn’t always ganking for winning laners.

On NRG, Santorin will likely be tasked with focusing on the top and mid lane. Unlike Bjergsen, GBM is a fairly mediocre laner whose strengths lie in the mid and late game. With this in mind, Santorin hasn’t been consistently effective at ganking even or losing lanes historically. So it’s possible the Danish jungler will focus his attention on snowballing Quas in the top lane and enabling his split push, leaving GBM to his own devices.

This could be a successful strategy – GBM has never truly had a mid-focused jungler and is perfectly capable of focusing on surviving the laning phase. Meanwhile, Quas will receive attention that he never found on Team Liquid. On the flip side, Santorin’s sometimes indecisive play may rear its ugly head again – especially if the jungle role continues to be a major source of damage in upcoming patches.

Overall, Santorin is likely the most variable of NRG’s new acquisitions. One on hand, it’s possible that he will fit into NRG by embracing the supportive role he showed during his best performing times on TSM. In particular, the possible synergy between him and Quas is especially exciting. On the other hand, the acquisition of Santorin likely leaves GBM still without a jungler who can help him transition through the laning phase. In addition, the current meta demands a lot of decision making and consistent carry play out of the jungle role. Although Santorin has strong mechanics, his decision making hasn’t held up in many of his games, and it’s unclear if he will be able to adjust to a larger role based on his history.

In many ways, KiWiKiD has become somewhat unfairly cast as a symbol of the region’s incompetence. Fans of other regions frequently point to his ability to hold down a roster spot as conclusive proof of the region’s lack of talent. While KiWiKiD certainly isn’t, and likely never will be, a top-tier support player, his poor play has often been unfairly exaggerated. While fans rush to defend underperforming players with strong histories, such as Cloud9’s Balls, KiWiKiD’s admittedly terrible LCS debut as a top laner, and equally poor starting performance as a support, means that his fans don’t have a positive reference point to refer back to. However, KiWiKiD is often mocked as the player he used to be, rather than the player he is.

In reality, KiWiKiD has some notable strengths in addition to his frequently highlighted weaknesses. Although the former Dignitas support is a below average laner and warder who struggles with champion pool issues, his unpredictable roams and consistent engages bring important value to his team. NRG in particular struggled with picking opponents off and starting uneven fights last season. Fortunately for the team, these areas are KiWiKiD’s specialty.

It’s possible that KiWiKiD can shore up the team’s indecisiveness by starting the fights that they need. In particular, his ability to pick off opponents from unexpected areas will synergize with split push comps or pick comps oriented around the individual play of Quas and GBM. In addition, his unpredictable roams during the laning phase may provide the early game pressure that GBM needs to shine.

While they may be overblown, some aspects of KiWiKiD’s poor reputation are well deserved. Perhaps chief among them are KiWiKiD’s tendency to get caught and his poor laning. The success of NRG’s search for an AD carry will be reliant on finding one who can play with decided independance.

With these flaws in mind, KiWiKiD is still an intelligent, if unexciting, pickup. While he is a player who doesn’t boast a lot of room for improvement, his game aligns very well with what NRG attempts to accomplish. His unpredictable playstyle will provide a much needed shot in the arm for a team which frequently bled out last season; but his individual level will be an issue when matched up against top-tier supports such as aphromoo.

Overall, the purpose of NRG’s moves is to ditch rookies for veterans in an attempt to triage a disappoint LCS debut. Because these pickups are happening mid-season, they had to settle for flawed players instead of perfect fits. Santorin and KiWiKiD’s respective indecisiveness and low individual skill ceiling may prove problematic for NRG. However, this will be a valuable second chance for Quas to show his ability to carry and for Santorin and KiWiKiD to show that they can play important roles on winning LCS teams. All three players will need to be worked into a new NRG system built around the strengths of their solo laners; but if all goes well, this squad of three veterans can both redeem themselves and help move NRG past their 5th – 6th place Spring Split ranking.