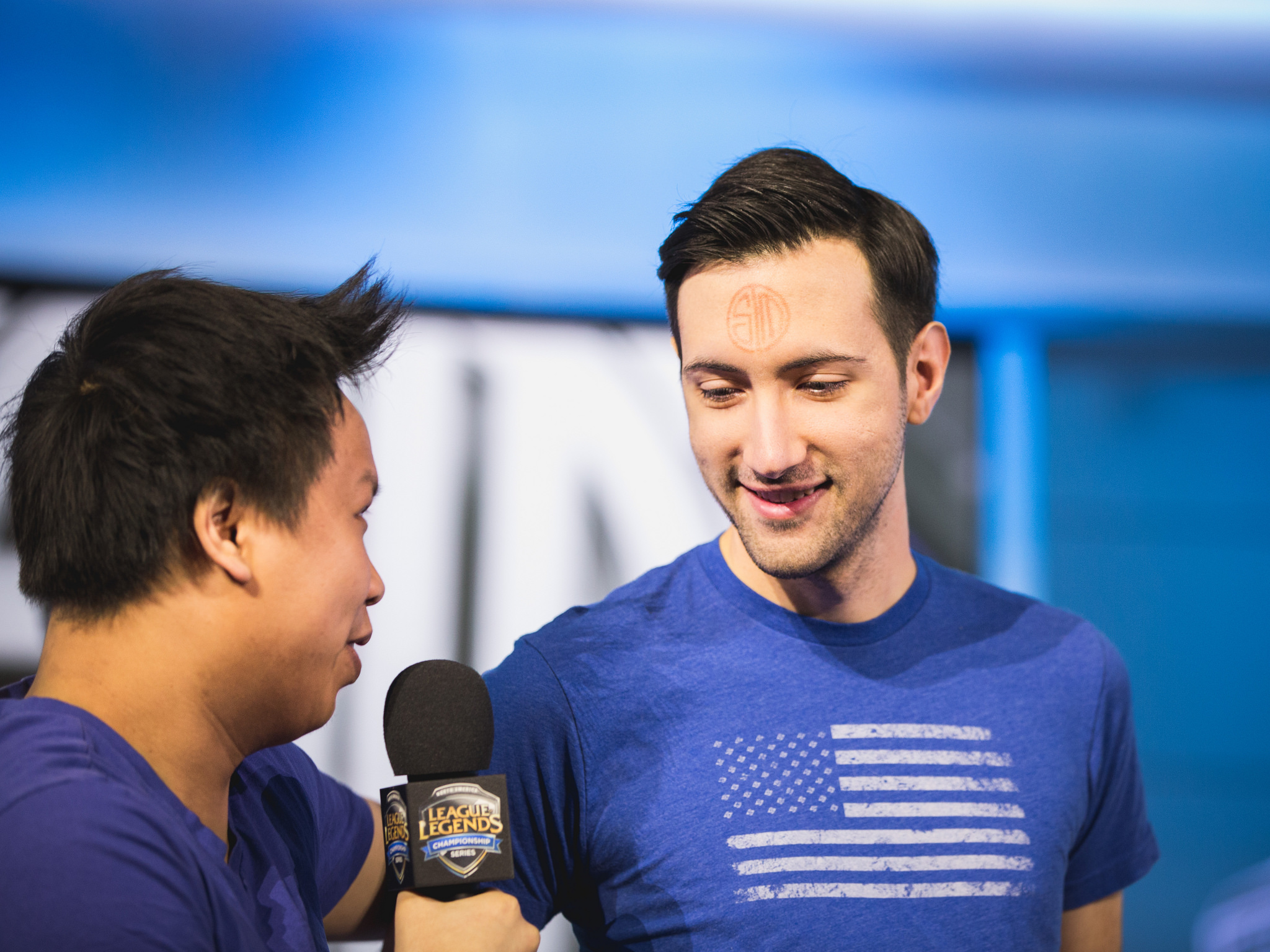 Coming back from the IEM Katowice break, the NA LCS is still just as full of parity as it was before. In fact, there may be even more parity now. At this point, the only thing that’s clear is the fact that Team SoloMid and Cloud9 are the best teams in the league, but even they can be beaten. Another edition of GAMURS’ power rankings is here, and the teams are closer than ever.

After every week of action, we will be releasing another power rankings article in which the teams will either move up or down based on how they perform in their matches, so don’t forget to check back here each week for the latest power rankings.

Without further ado, here are the March 9 power rankings for the 2017 NA LCS spring split, starting from No. 10.

This was probably EnVyUs’ best weekend of the split up to this point, but it still wasn’t quite convincing enough to move them out of the last spot in our rankings. The close series against FlyQuest needs to be scrutinized a bit, as FlyQuest has had an obvious drop in form lately, and the team’s drafts are becoming stranger and stranger, even if they do work. Beating Immortals was decent, but Immortals looks out of touch coming off of the break. EnVyUs is improving, and we can see that, but we need to see more after such a terrible start.

This week, EnVyUs will look to continue their late push to avoid relegation, and possibly even qualify for the playoffs. Team SoloMid will likely sweep this team aside and easily win their series, but EnVyUs has a chance against Liquid. Chae “Piglet” Gwang-jin’s swap to the mid lane went well enough, but the team is still obviously shaky.

What an ugly way to come back from the break. Before the break, Immortals looked to be on a hot streak, winning three of their last four games. Hopes were high heading into last week’s matches, as Team Liquid and Team EnVyUs were the bottom dwellers. All signs pointed toward a 2-0 week for Immortals, but things went south when they stepped on the rift. Immortals looked more out of sync than ever. Coupling that with a slight rise in performance from Liquid and EnVyUs, Immortals fell hard.

Redemption will not come easily, as Immortals takes on FlyQuest and Team SoloMid this week. If FlyQuest keeps up their recent form and Immortals shakes off last week, Dardoch and company have a slight chance. Team SoloMid should not struggle with this squad, though, so Immortals will have to get back on track against FlyQuest or face a 0-2 week.

Dignitas is still looking like a pretty shaky team, and the chemistry just does not seem to be there. The one game win over Phoenix1 was good, but not enough. Game one against TSM was a close affair, but game two was somewhat of a massacre. This squad needs consistency, and they need it quickly. With the loss of Stunt to Phoenix1, Dignitas has picked up Swifte to be the backup for Xpecial.

Counter Logic Gaming and Echo Fox stand as Dignitas’ opponents this week. Dignitas should realistically fall to CLG, but the consistency of both teams has been called into question all split, so anything could happen. The same goes for Echo Fox. Dignitas appears to be the weaker team most of the time, but Echo Fox has played some really terrible series. Regardless, Dignitas needs to fight for at least one series win if they want to stay away from relegation.

Midlet’s debut against Immortals was pretty impressive, and Reignover seems to be getting back to his old successful ways now that he has an aggressive solo laner to work with. It’s too early to call this team successful, because there are still glaring problems across the map, but the new Liquid is off to a good start. Right before the trade deadline, Liquid made two major acquisitions in Doublelift and Adrian. Jung “Youngbin” Young-bin’s stint with the squad was a short one, as Doublelift will see his first action this week. Matt will remain the starting support for at least next week.

Facing off against Pobelter and Henrik “Froggen” Hansen last week is nothing compared to Piglet’s first opponent in the mid lane this week: Nicolaj “Jensen” Jensen. Pobelter has not been himself this season, and Froggen, while still very good, is not one of the top tier mid laners in North America. Jensen is arguably the best in the NA LCS, and Piglet is going to have a tough time. Liquid then takes on EnVyUs, a team they should be able to beat, and a definite must-win if they want to even have a chance at escaping the relegation tournament. Reignover, Piglet, and Doublelift are all superstars, but it will take a lot of work to save this team from going to the promotion tournament.

Echo Fox had a poor showing on an even week, so there goes what little consistency they had as a team. This might be the weirdest team in the league. At times (usually on even weeks), they appear to be able to battle with the giants. At other times, however (usually on odd weeks), they look like they should be in the Challenger Series. Last week was an even week, but Echo Fox was smashed by Cloud9 and took a tight series win over a Liquid team that is lacking in skill and synergy. The future does not look bright.

In their first match this week, Froggen and company take on Phoenix1. While Phoenix1 may be a little bit weaker as a team after losing Adrian to Liquid, this is still a strong squad that Echo Fox will struggle to face. If Phoenix1 is too heavily impacted by the loss of Adrian and the lack of synergy, Echo Fox could sneak in a victory. Next up, Echo Fox has Counter Logic Gaming. CLG has been on a good run lately, winning three of its last four series and only losing to Team SoloMid. If they keep it up, Echo Fox will fall.

Though Inori returned, Meteos held the starting spot in Phoenix1’s jungle last week. The team looked decent, but lacked the power they had in their win over Cloud9. With the loss of Adrian, Stunt is filling in after being picked up from Team Dignitas. It’s unclear whether or not Inori is officially returning to the jungle, but it’s a relatively safe assumption. Since Inori and Adrian were not getting along, this may be good for the team, but it will be a huge shift after playing with Meteos in the jungle for two weeks and getting a new, somewhat untested, support this late into the season. This team will need to develop synergy, quickly, and Stunt will need to show that he is not a detriment to the team’s success.

The squad’s first game this week will likely not be an easy one, as they take on FlyQuest. While FlyQuest’s recent form is among the worst in the league, everyone knows the team’s potential. This could be a tight series depending on how quickly Stunt and Inori incorporate themselves into Phoenix1, and whether or not FlyQuest will be back in form. The second series against Echo Fox should be an easier one, but that squad is still not one to take lightly.

FlyQuest’s form as of late has been, well, bad. That continued last week, as the squad pulled out unconventional picks like Mordekaiser and Blitzcrank in order to secure a win over Team EnVyUs, one of the worst teams in the league. FlyQuest was then swiftly dismantled by Cloud9, questionably leaving Balls off of a tank in both games.

This week, FlyQuest takes on Phoenix1 and Immortals. All three of these teams are likely to have a bad week, so it’s anyone’s guess as to how this will turn out for FlyQuest. If they can return to the form they were in before their first loss to Cloud9, FlyQuest will sweep Phoenix1 and Immortals with ease. If they stay at their current pace, they will likely win, but it could be close.

Counter Logic Gaming’s rise in our rankings has less to do with their good performance, and more to do with Phoenix1’s roster mayhem and FlyQuest’s drop in form. Regardless, the big dogs are back in the top three after a decent weekend. A 2-0 loss isn’t pretty, but it was against arguably the best team in the league right now. CLG may be technically tied with P1 in our rankings, but CLG has the edge based off recent results.

In their first series this week, CLG gets to take on Team Dignitas. This should be an easy sweep for CLG, or at least a 2-1 victory. A loss here would be worrying. Next up on the list is Cloud9, and this one won’t be easy. If CLG can pull out a win, however, they can be considered serious contenders for the title again.

Using the break strategically to get back in form, Cloud9 looked dominant against Echo Fox and FlyQuest. The fight for first is extremely close, and one mistake could cost Cloud9 or Team SoloMid the top seed going into the playoffs.

Team Liquid and Counter Logic Gaming stand as Cloud9’s opponents this week. The new-look and now star-studded Team Liquid is trying to avoid the promotion tournament, and maybe even make it to the playoffs, so they will be going all out and trying to win every series they have left. Cloud9 could be in for a fight, depending on just how quickly that roster can mesh. CLG offers an obvious threat, but if the team’s stay in their current form, this is Cloud9’s series.

Not skipping a beat after taking down Cloud9 and FlyQuest, TSM swept both Counter Logic Gaming and Team Dignitas in their matches last week. This squad looks to be in form, even turning Doublelift away, according to Duncan “Thorin” Shields, when Doublelift wanted to return for the remainder of the split.

TSM may lose again before the season ends, but it won’t be this week. First up on the docket is Team EnVyUs, arguably the worst team in the league. In the form that TSM is in, this series will be a sweep. Next up is Immortals, another team that you could arguably say is currently the worst in the league. Once again, this should be a sweep for TSM.