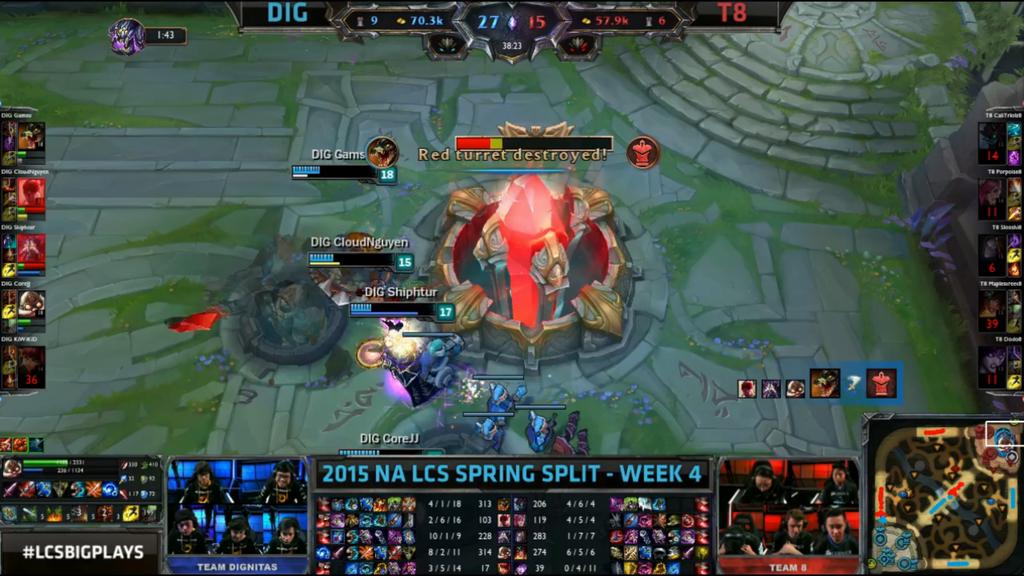 Dignitas vs Team 8 was the final game for Week 4 of the NA LCS Spring Split. Both teams went for lane swaps as the duo lanes met up top and the top laners met down bot. CloudNguyen’s Lee Sin went for an early gank before the 4 minute mark and got first blood on Slooshi8’s Orianna. Slooshi8 was able to get the return kill on CloudNguyen with the help of the minions. Cloud tried to gank mid again but Porpoise8’s Vi was nearby and able to turn the 2v1 gank into a 2v2 and secure a kill on Shiphtur’s Kassadin. Team 8 was able to get the first turret of the game on a tower dive bot lane that also got them a kill on KiWiKid’s Annie.

A prolonged team fight in the Team 8 red side jungle ended with Dignitas getting a 4 for 2 and the top tower. At 12 minutes Gamsu and Calitrlolz8’s Maokai traded kills because of Gambus diving the top inner. T8 won a 3 for 0 fight bot before 15 minutes when Dignitas tried to reengage. At around 17 minutes Dignitas got an almost ace (Porpoise8 respawned before the final kill) and a triple kill for Shiphtur.

Just after 20 minutes Team 8 picked up their 5th turret compared to the 2 of Dignitas. They also had just over a 1 k gold lead and 2 dragons to 0. After a pick on Dodo8’s Morgana Dignitas was able to get the outer mid turret. Shiphtur got another triple kill right before the 28 minute mark getting Dignitas the gold lead by 1 k and their first dragon. At 29 minutes Shiphtur was 8/1/5 on Kassadin.

CoreJJ’s Corki got a double kill in a fight that Team 8 started at 32 minutes. After Dig aced the fight they turned towards baron to secure that objective. Dignitas finally equaled the turrets at 5 at 35 minutes and pushed their gold lead to 7 k. CoreJJ was able to split push bot and get an inhibitor turret without any resistance from Team 8. Just before 38 minutes Dignitas got the bot lane inhibitor and aced Team 8. With this they moved on to the Nexus and won the game to move them and Team 8 to 3-5 on the split.