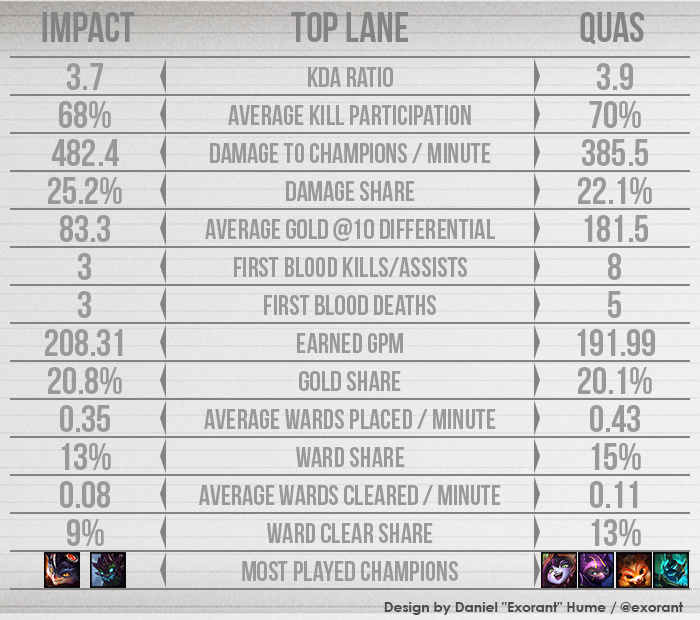 Impulse and Liquid enter the Spring 2015 third-place match with chips on their shoulders, both teams eager to redeem themselves after Semifinals losses to Team Solo Mid and Cloud9, respectively. But more than pride is on the line: the winner of the third-place series will take home 20 additional Championship Points, which could make all the difference in earning a spot in the 2015 World Championship tournament.

Both teams have diverse international rosters: Team Impulse has two Korean players and a Chinese Mid laner, while Team Liquid also has two Koreans on its roster along with their Venezuelan Top. Even more intriguing is the World Champion pedigree on each team, with TiP’s Impact and TL’s Piglet sharing a World Championship victory in 2013 when both played for SKT T1 K in Korea.

Player nationalities aside, there are some very interesting head to head matchups to keep an eye on during the third-place series. Let’s take a look at some player and team statistics from the regular season and playoff games that both teams have played so far. We’ll try to get an idea of where each team’s advantages lie.

Bear in mind that these breakdowns include all games from the Spring 2015 regular season, tiebreakers, and playoffs. Any differences with previous previews are due to the inclusion of the tiebreaker and playoff games in this version.

Impact and Quas match up very similarly in KDA and kill participation, but Impact has dealt out more damage than Quas, on average. The extra damage is due in part to TiP’s greater willingness to fight in general. (See the Combined Kills per Minute stat in the team head to heads below.) But Impact’s damage share is also higher, showing that Impact has done a bit more carrying than Quas.

Quas seems to have received more Jungler attention early on, based on his higher First Blood kills/assists and FB deaths. Quas has used his high First Blood count to build big gold leads over opposing Top laners at 10 minutes. Impact, though, has tended to out-earn Quas slightly over the full course of the game.

Quas has offered a little bit more vision control than Impact, both placing and clearing more wards per minute.

Both Top laners have played a wide variety of champions this split. Impact has won 4 of 5 games on Rumble, while Quas won 2 of 2 on the champion. Both players have won 3 of 3 games on Hecarim. Lulu is a high priority champion for Quas, as well, while Impact has been playing some Smite/Teleport Shyvana since the introduction of Cinderhulk.

Overall, Impact has brought more damage to the table because of Tip’s fight-happy play style, and slightly out-earns Quas, but Quas has accomplished more in the early game and is more active in the vision game, making this a more even match than some might expect at face value.

Advantage: Too Close to Call

We could almost take the summary of Impact vs. Quas and apply it straight to the Junglers, as well. Rush has dealt more damage, on average, but IWDominate has the better KDA. Dom also has a more consistent early game, tending to have a gold advantage at 10 minutes, while Rush has averaged a small gold deficit. Rush has slightly out-earned IWDominate per minute overall.

IWD has very impressive First Blood numbers, participating in 9 FB kills and only giving up FB himself once. Rush is even more active on the gank path, but his 5 FB deaths show that he can be prone to getting counter-ganked early on.

Rush entered the competitive scene this split straight out of Korean solo queue, and his relatively low ward placement and ward clear numbers are evidence of that.

Rush’s highly aggressive play style shows in his numbers, in both positive and negative ways, while IWDominate has adapted more quickly to the tank/utility style, including greater focus on warding. Rush’s peaks have been higher than IWD’s peaks, but Rush’s valleys have also been lower. In a slow-and-steady, team-fighting tank meta, that may play more into Team Liquid’s hands.

At first glance, FeniX’s combat numbers look to be at least on par with XiaoWeiXiao, if not better. XWX has a slight KDA advantage, but FeniX has bigger numbers in the other categories. But it’s important to bear context in mind: XiaoWeiXiao’s lower average kill participation and damage share, for example, can be blamed on Impact and Rush, who do a lot of skirmishing elsewhere on the map, outside of XWX’s reach. The higher damage outputs of the two Koreans, in comparison to Quas and IWDominate, also account for XWX’s lower damage share.

Lulu could be a somewhat contested pick, but likely more for Quas’s sake than FeniX’s. FeniX has only won 1 of the 4 Lulu games he’s played this split. Overall, both players have used a lot of different champions, so their selections this series could be difficult to predict.

Piglet doles out a lot of damage to champions, but Apollo has him edged in KDA. Piglet’s damage is a bigger share of his team’s total damage, but Apollo’s lower damage share can be attributed to the high amounts of damage from Impact and Rush.

If we look only at the playoffs, tiebreaker, and last two weeks of the regular season, Piglet’s damage per minute number skyrockets to 736.0, with a 6.6 KDA, while Apollo’s numbers look a bit lower.

Piglet’s gold differential at 10 minutes is atrocious, and if week look only at games from week 8 onwards the numbers is even worse (-153.85). Apollo, on the other hand, has been doing fairly well in the laning phase. Both players have earned gold overall at a similar rate, but Piglet has received a larger share of his team’s gold.

Champion pools aren’t likely to overlap too much at the AD Carry position, based on what Apollo and Piglet have played so far this split. Apollo has only played six different champions this split, including single games on Jinx and Urgot. Graves and Sivir have been his picks in 19 out of 26 games, so his champion select may be relatively predictable during the series. Piglet, meanwhile, has pulled out 9 different champions, only slightly favouring Kalista and Lucian.

It’s difficult to assess these two players overall based on statistics, because of Piglet’s poor showings in the lane phase but high damage output. Ultimately it comes down to Piglet having very high peaks and very low valleys. Which Piglet will show up this series? I’m willing to drink the Kool-Aid.

Janna is a priority pick for both players, especially for Xpecial, who has put in 13 games on the champion. Janna may especially be a contested pick because of her importance to the JuggerMax composition, which Team Liquid has run several times.

Support is the most challenging position to evaluate statistically, but with the numbers in front of us the small edges go to the veteran.

Note: Combined Kills per Minute measures team kills plus opponent kills, divided by game length and averaged across all games played. Average gold differential @ 10 minutes is based on values rounded to the nearest hundred.

Team Liquid has played longer games, on average, than Team Impulse. That’s something to bear in mind when looking at damage per minute and gold per minute numbers, which will inflate slightly with longer game times, but shouldn’t really change the comparisons in significant ways.

Team Impulse fights more often, as we’ve mentioned, but that hasn’t translated into a stronger team KDA. The frequent skirmishing done by Impact and Rush definitely raises the Combined Kills per Minute number. Early game stats  suggest that TiP may have an advantage in smaller, earlier fights, but TL’s overall combat numbers are tied to more team fight success.

TiP has generated better gold leads at 10 minutes, on average, and they have apparently done it mostly through their laning: their First Blood rate is weak, and they’ve only taken the first tower 54% of the time.

Team Liquid, meanwhile, has still generated early gold leads (based mostly on Quas and IWDominate, judging by the player stats). First Blood was a big part of that early in the split, but hasn’t been recently. Instead, TL has put a lot of priority on securing early Dragons.

Both of these teams have strength in Top and Jungle, and both have players with high potential who struggle with consistency, with Rush, FeniX, and Piglet all mixing huge carry games with disappointing low points throughout the split. A big part of this series could come down to which of those players shows up in top form, and which has a letdown.

If Rush has anything to do with it, these games will be bloody, with lots of early action, but IWDominate will probably try to lead his team into a more measured early game, entering the mid-game with good team fight options and Dragon control.

If the games are decided earlier on, that will probably mean that TiP is winning, but if TL can keep things close and drag the games longer, it should swing things in their favour.

Thank you to Daniel “Exorant” Hume for putting together the graphics!