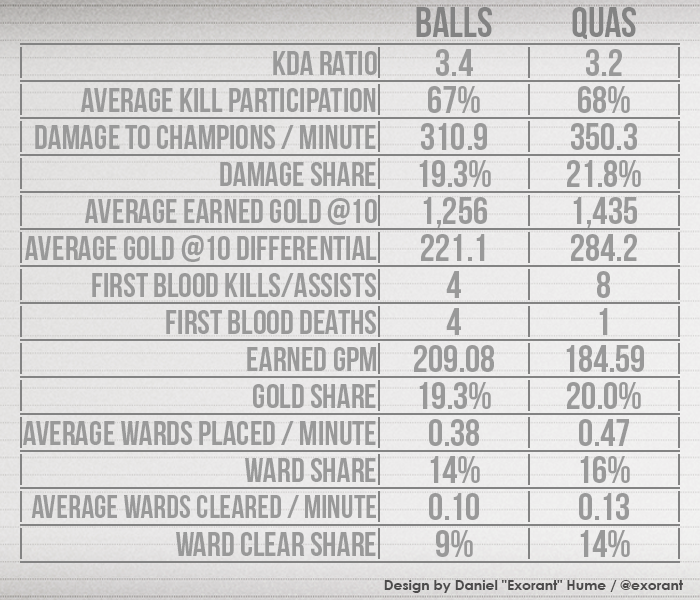 Cloud9 vs. Team Liquid is a matchup between two veteran rosters. Today we’ll take a look at the teams head to head, both by position and overall, drawing on various statistics from the regular season and tiebreakers to guide our comparisons. We’ll see why Cloud9 are the favourites coming in, and where Team Liquid’s relative points of strength lie throughout their roster.

These stats don’t tell the whole story, but they draw attention to some interesting facets of the players and teams which we might not otherwise notice. Through these comparisons we’ll see the strengths of each team’s roster, and get some insight into their overall strategic approaches, as well.

I’ve presented my interpretations based on these numbers, but as always, I encourage everyone to draw their own conclusions!

If you’re interested in some of the storylines going into this match, and a more strategic angle on what to expect, check out CD-Mangaka’s preview.

Balls and Quas had very similar KDA and Kill Participation, but from there the stats quickly veer in Quas’ favour. Quas did 13% more damage to champions per minute, on average, and 21.8% of his team’s total damage, noticeably more than Balls’ 19.3%.

Both Balls and Quas out-earned their opponents in the first 10 minutes, on average, but Quas was in on eight First Bloods in 19 games, while Balls was only in on four FBs in 19 games. On the other side of the coin, Balls was victimized for First Blood four times, compared to Quas’ one FB death. Quas also invested more into vision control than Balls, both in how many wards he placed and how many he cleared.

Meteos plays a more carry-oriented role than IWDominate, doing more damage to champions and a larger share of his team’s damage output, and taking home a larger gold share to go with it. Meteos’ stellar KDA partly reflects his team’s overall success–winners always have much higher KDAs–but mostly the difference comes from his extremely low death count. Meteos died only 30 times in 19 games, barely more than half of IWD’s 58 deaths.

Impressively, Meteos managed all of these combat accomplishments while matching Dom’s vision control, despite Meteos’ preference for using an upgraded yellow trinket over a Sightstone, saving gold but denying himself the luxury of a Sweeping Lens.

Neither Hai nor FeniX had an especially impressive regular season, but both players are crucially important to their teams’ success, Hai through his shotcalling role and FeniX through his damage contributions and deep champion pool. Over the course of the split, Hai came out ahead of FeniX in KDA, but dealt a lot less damage to champions. In the laning phase, FeniX actually out-earned Hai by 10 minutes, on average, but Hai had a better gold differential at 10 minutes, showing that he was more able to deny farm from his opponents. Both players were victimized three times for First Blood.

A stat line that really jumps out for Hai is his vision contribution: he placed twice as many wards as FeniX per minute, on average, and cleared three times as many.

Advantage: Too close to call

Sneaky had a phenomenal season statistically, doubling Piglet’s KDA, earning the highest damage share in the league, out-damaging Piglet per minute by 23%, out-earning his opponents by 10 minutes, and contributing to three First Bloods while never surrendering a FB death.

If we look only at Piglet’s performance in the Quarterfinals and the Tiebreaker match vs. Team 8, however, Piglet starts to look a lot better, with an insane 9.0 KDA and 742 damage to champions per minute. Inflated numbers are to be expected when we’re looking only at a series of wins, but the stats do suggest that the AD Carry matchup may not be as one-sided as it appears.

Like most of his teammates, LemonNation captured a fairly high KDA, his 4.6 besting Xpecial’s 3.2. His Kill Participation of 78% is especially impressive when set against Xpecial’s rather pedestrian 67%. Xpecial topped his counterpart in ward placement, but both Supports cleared enemy wards at the same rate.

LemonNation played six different champions in wins during the split, and was the first to introduce Veigar and Nautilus to the bottom lane in North America. His champion pool is among the most diverse and creative in the NA LCS. Xpecial also has a fairly deep champion pool, having won on five different champions, but his picks tend to be more traditional (Annie, Braum, Janna, Leona, Nami, Thresh). If Lemon is cosidering pulling out another Support Surprise, that could create an edge for Cloud9.

Note: Average gold differential @ 10 minutes is based on values rounded to the nearest hundred.

Cloud9 has one of the lowest average game lengths in the NA LCS, while Team Liquid’s games have been among the longest. This speaks to Cloud9’s ability to gain an early advantage and then press their lead home with excellent map play and objective control, quickly converting leads into wins while denying comeback opportunities.

Team Liquid has strong Dragon control, taking down the first Dragon in 58% of their games, but Liquid only secured the first tower in 26% of their games, half as often as Cloud9’s 53%. That partly explains Cloud9’s stronger numbers in average gold differential at 10 minutes.

For team vision control, Team Liquid takes the win in ward placements, but Cloud9 is more effective in clearing away enemy wards. We’ll have to watch the warding battle during the semifinals to see if Cloud9’s Sweeping Lenses can keep up with Team Liquid’s Sightstones.

The past is not a perfect predictor of the future, especially in a game like League of Legends with its shifting meta game, which currently favours tank junglers and a bizarre assortment of oddities in the solo lanes, like the recent Smite/Teleport trend or Urgot, Cho’Gath, and even Malzahar in Mid. Anything could happen, and that’s why we love to watch.

But judging by the statistics we’ve reviewed, Cloud9 has the advantage over Team Liquid in three of the five positions: C9’s main strengths appear to lie with Meteos in the Jungle and with Sneaky and LemonNation in the bottom lane, while Team Liquid has an advantage in the Top lane. Both teams have upward-trending Mid laners, with no clear advantage to either player.

Team Liquid has to hope that the big performances from FeniX and Piglet in the Quarterfinal win against CLG are signs of things to come, because an average performance from either of the Koreans will likely lead to defeat.

On the whole, Cloud9 looks to have the advantage in the early game, but Team Liquid has plenty of experience this split with pushing games late and looking for successful team fights, a formula that earned them two of their three Quarterfinal wins against CLG, the best early game team in the NA LCS. The difference here is that Cloud9 has excellent mid-to-late-game shot calling and map movement, an area of weakness for CLG. Team Liquid may not be able to simply keep things close for 30 minutes and then win a team fight, because Cloud9 knows how to win the map and avoid unfavourable fights. If TL’s map movement isn’t up to snuff, they’ll find themselves losing objectives and quickly falling further behind.

Thank you to Daniel “Exorant” Hume for putting together the stats graphics!