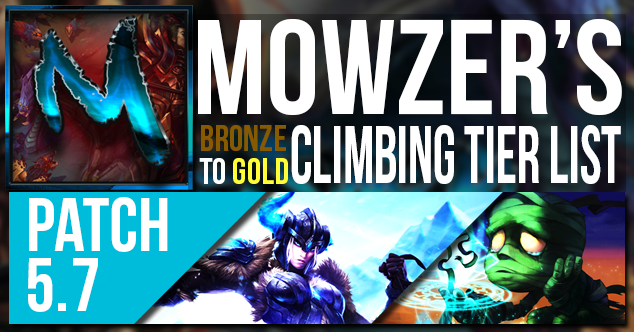 Hey everyone. Mowzer here. Here is my bronze to gold jungle “climbing tier list” for patch 5.7. This is not replacing my normal “top 10” tier list. This list is aimed at helping those at lower MMR to climb the ranks. This list is just my opinion and is not to be taken as fact.

For changes to the jungle and my thoughts check out my “Jungle Notes.”

Reasoning: Both o these champions are straight forward and rather easy to pick up. They both dish out a lot of damage while being tanky, have a lot of cc, are amazing at team fighting, have % health damage, and possess strong initiates. Their weakness comes from their early game. Both are vulnerable to invades, but they quickly make up for that in the mid-late game.

Reasoning: All of these champions have something different to offer the team.

My suggestions for different play styles: Tank – Nautlius. He has a ton of CC and turns into an unkillable mountain mid-late game while putting out decent-good damage. Hyper Carry – Rengar. He snowballs hard, destroys squishes, and has amazing roam/split push. He has a hard time coming back from behind. AP Damage – Nidalee. She has an amazing kit for poking and carrying. She relies on her spear for a lot of damage, so practice landing it to do well with her. Also, knowing which walls she can and cannot jump help too.

Reasoning: This is where the majority of the junglers end up. They are all good, but they lack, in my opinion, the power to complete with the upper tiers.

My suggestions for different play styles: Tank – Zac. He has a fantastic teamfight and has a great damage to tank ratio. He has a hard time carrying the game by himself. Landing his E is key to doing well with him. Hyper Carry – Master Yi. There is a big difference between a good Yi and a bad Yi. He doesn’t take a lot of mechanics and skills to pull off. Learn how to dodge damage with Q and reduce damage with W. Know your limits and when to fight and when not to. Teams that learn to focus him down will send him to the graveyard rather quickly. Manage your cooldowns wisely. AP damage: Cho’gath. I don’t like cinderhulk on him and I prefer to go the magus route and then get frozen heart second. Doing this will max your CDR in a short time and allow for a lot more CC and damage to be put out. From there you build tank and a late game deathcap for damage. You remain a force to be reckoned with as a tank and as a dpser.

Tier 3: Viable / Require a certain level of proficiency to pull off

Reasoning: These champions can jungle, but they typically do better laning than jungling. They either require a lot of gold or skill with them to pull off.

Tier 4: Can work, but typically won’t do well or require lots of gold

Reasoning: This is where everyone else goes. Every champion in the game can jungle, literally.

Recommended Jungler for newer Junglers: Nunu – He has little issues clearing the jungle and securing dragon and baron. He doesn’t need potions his first clear and fits into almost every team composition. His E has great damage early game, but will fall off as the game goes on. W is a great skill the ADC and other various champions, such as Hecarim. His downfall comes from the fact that he can’t carry the game himself and his damage falls off greatly mid-late game. He owns the early game though.

There are many junglers to choose from this patch. Don’t be tricked into thinking that there are only a couple of “viable” ones. Solo Q is not LCS, LCK, LPL, etc. There are no guides or streams that can turn you from a bronze/silver/gold tier player into a challenger tier player overnight. Climbing the ranks takes time, skill, dedication, and a bit of luck. Admit your mistakes and improve from them and you will go far. None of us are perfect, why act as such?

TL;DR – Cinderhulk was nerfed a bit, but it was more fine tuning than anything. It is still a fantastic item and is the key to shaping the current meta. Evelynn got a nice buff and is making a big comeback in Solo Q. Do no underestimate her damage and tankability. There are a ton of good junglers to be played this patch.