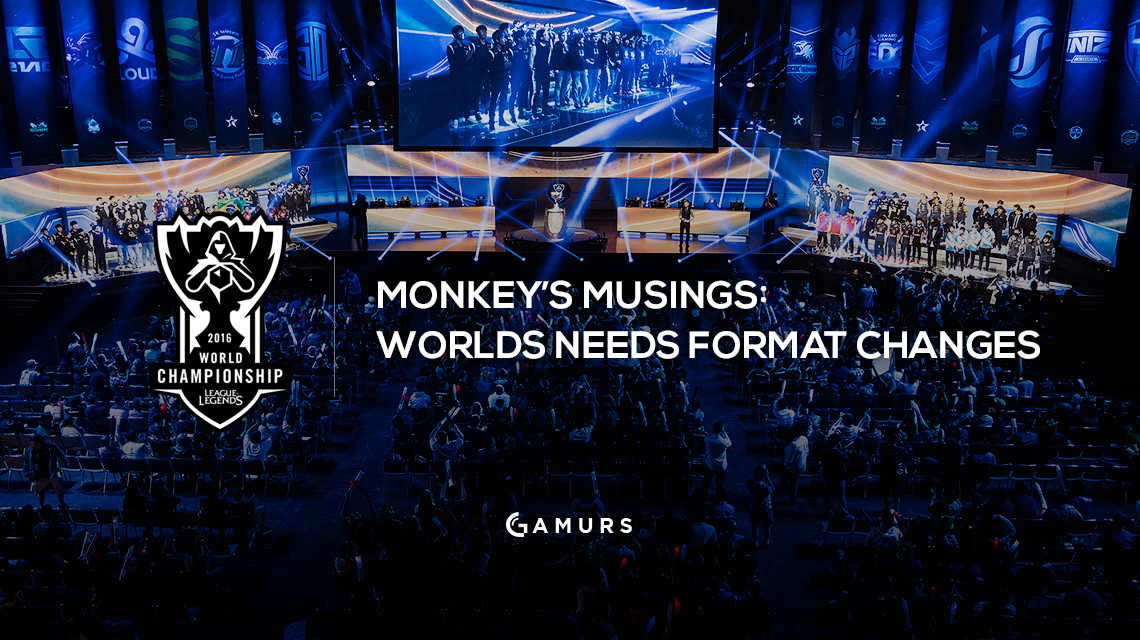 With the overwhelming amount of surprises coming out of the International Wild Card teams, questions have been constantly asked about the Worlds format in the League of Legends community. Do the “World” Championships really represent such a stage when only two teams that are not a part of the EU, NA, South Korean, Chinese and Taiwan leagues are represented at the tournament? The IWC circuit for those two places usually is contested by many teams from many separate regions; so why does Riot Games not just allow the best team from each region to take part in their World Championships and make Worlds feel more like a spectacle where upsets, like we are seeing from INTZ e-Sports and Albus NoX Luna, can become a common staple at the end of the year grand event?

The IWC playoffs consisted of teams from Brazil, Russia, Japan, Latin America, Oceania, South East Asia and Turkey. If you were to take just the best team from each region, then you would have a greater diversity of fans, cultures and playstyles to look at, which breathes new life into the competition, allows for a bigger audience base and truly gives off the feeling of a World Championship. But, I digress; this is something that has been preached for many years, but stubbornness to change the format is forever present due to the multiple concerns I will address later on.

There has always been this growing call into why, but never how, so I want to label a simple method Riot could bring into Worlds 2017 to expand and improve their tournament, based on other large scale championships both in and out of esports.

– Similar to the European football/soccer championships.

-In the event of a third place tie, the team with most KDA> Gold Lead> etc. progress.

-Bring in playoffs for third-placed teams if all criteria keep matching up (though very unlikely exact gold leads will be the same).

Allow LMS to have the third seed

This also leaves options to improve the format in the future on the success of the new format. As more regions gain IWC recognition, they could gain more slots like CB LOL and create a truly global stage.

Keep the IWC Regionals as a means to fight for seeding for the IWC sides.

Why Change What Works?

The biggest problems facing any changes coming through are usually around the players and the competition itself. Are players playing too many games? Are they able to rest at all from a hectic regional schedule? Will the inclusion of so many teams lead to the lack of talent/entertainment at such an event? If the event as a whole is working, why should Riot change it?

To that I say: If Riot truly wants to keep League of Legends as a stable sport, let alone an esport, changes, implementations and other forms of lacking change will only sooner or later come back to haunt them. If a formula is continuously used, it can only do so for so long before people lose interest.

Look at Pokemon as an example of that (I know, bare with me). Many different versions of “if it’s not broken, don’t fix it” came out in support of the game, but when numbers of sales declined, they brought in Mega Evolutions, Alola forms, and a lot of new changes to revitalise the series. It’s the same with sports.

If we as a community are truly happy to keep things as they are, then fine. But with Riot starting to implement new changes to benefit its esports scene and keep the esports teams of the future happy to create a healthy infrastructure, I hope Worlds is the next thing they look at and think “How can we make this better?”

What would you like to see changed about the current Worlds format? Let us know by commenting below or tweeting us @GAMURScom.

Thanks for reading. My name is Adam Newell and this is the first of a new series called “Monkey’s Musings.” Let me know what you think, if it’s something you would like to see more of, and which esports scene/game you would like me to look at next week.