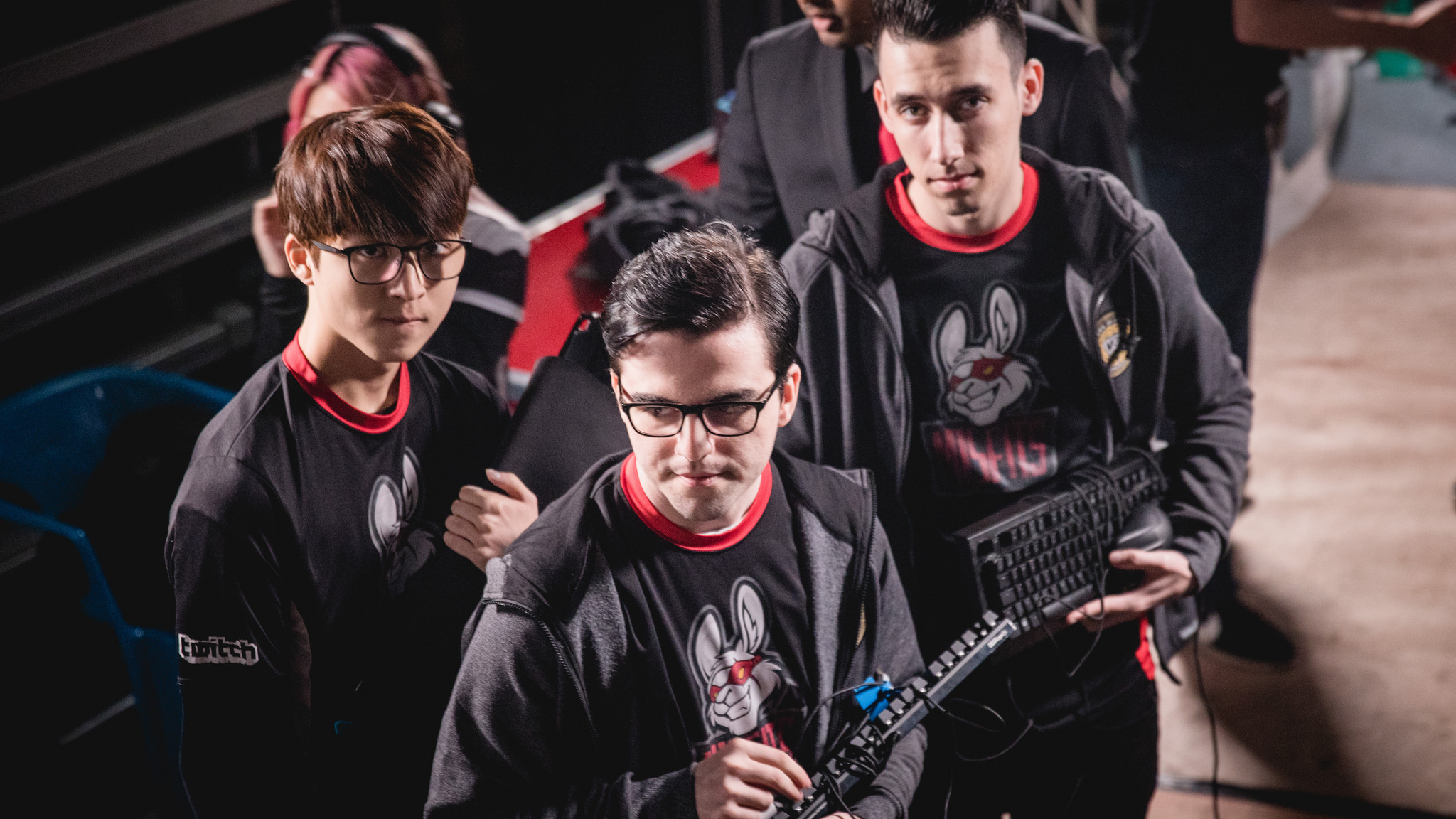 This year’s League of Legends World Championship has been absolutely crazy.

The favorites, Longzhu Gaming, are out after a stunning 0-3 in the quarterfinals. North American and European champions, TSM and G2, didn’t even get out of the group stage—well that’s not really a surprise anymore, they haven’t made it out of groups in years. Still, upsets are happening left and right.

One of the most surprising teams has been the EU LCS second seed, Misfits. After an unlikely playoff run in the Summer Split, reminiscent of Splyce’s performance last year, they were expected to serve as cannon fodder for Group D teams. Instead, they started winning, and by the end of groups, had proven themselves as one of the most improved teams at Worlds.

But now they face their biggest challenge ever. Standing in their way are SK Telecom T1, three-time World Champions. If there’s one thing that’s a constant at this tournament, it’s that SKT wins. They are undefeated in best-of-fives at Worlds. And Misfits have to play in the quarterfinals on Thursday morning at 4am ET/3am CT.

Misfits better be ready for the fight of their lives, because SKT will challenge them like no team they’ve ever seen.

For years, SKT’s foes have fantasized about how they could be beat. A lot of those fantasies involve shutting down star mid laner Lee “Faker” Sang-hyeok, the best player in the history of the sport. Even Misfit’ own star, Tristan “PowerOfEvil” Schrage has revealed how big beating Faker means to him personally. “Facing SKT and Faker is a dream itself,” PowerOfEvil told Riot Games in an interview. “I’m trying to visualize every day how it would feel to win against SKT and how it would feel to beat Faker.” Those could be some famous last words.

Faker has had one of his most inconsistent splits this summer as SKT took a while to figure out the meta. He still doesn’t really have Syndra in his champion pool, although he’s fantastic on the other meta mids. And historically, when teams are able to successfully camp Faker, they’ve had some success. In one particularly impressive victory last spring, KT Rolster was able to attack their worst matchup by having jungler Go “Score” Dong-bin camp for Heo “PawN” Won-seok, getting kill after kill against the SKT star.

Those that follow the history between the two telecom giants will realize that KT didn’t actually win that series, however. Instead, SKT managed to stabilize and pull away in the late game behind ADC Bae “Bang” Jun-sik’s ridiculous Ezreal.

Don’t let the side lanes farm

That’s the danger when teams prioritize Faker too much. Faker’s biggest moments have often come on high-damage champions that demand attention: Zed, Leblanc, and Kassadin. But he’s also a fantastic team player, one who knows how to snowball leads in the side lanes. Remember, he won Worlds in season five by playing a bunch of Lulu, buffing up his teammates instead of himself. And he’s innovated the ultimate save-your-team champion this year in mid Galio, which has become a meta pick for nearly every Worlds team.

Putting too much attention on SKT’s strengths can lose you the game as their side lanes snowball ahead. Last week, Cloud9 came to know how it feels to let top laner Heo “Huni” Seung-hoon just push straight into their base as Jayce. Bang can make mistakes in lane, but he’s carried his fair share of SKT games over the last three years. This is not a solo mid type of team.

The good news for Misfits is that their side lanes are where a lot of improvement has come in. Barney “Alphari” Morris has surprised with his performances at Worlds, including a couple games where he has shut down carry champions, the types Huni likes to play. And ADC Stephen “Hans Sama” Liv has overcome many of his own issues in lane to be a major factor in Misfits’ teamfight. This is more than the team that would farm around PowerOfEvil and ask him to solo carry.

Don’t let him rope you in

When Misfits do come for Faker, they better be damn well sure they kill him. C9 jungler Juan “Contractz” Garcia thought he had one such kill on Faker in the first week of groups. Instead, Faker turned the young player into his personal highlight.

Misfits’ jungler Nubar “Maxlore” Sarafian has shown a ton of growth this summer. After joining the team in the middle of the year, he’s slowly become more bold with his pathing, figuring out creative ways into ganks and invades.

Faker can be killed. But he’s known as God because he nearly always bounces back. Misfits have to keep that from happening by stepping harder on the gas pedal.

One of the most interesting things about Worlds this year has been the contrast between teams that draft for the early game and those that prefer to scale for late. SKT are in the latter camp, comfortable with picking losing matchups. Misfits made it this far by getting tempo advantages in the early game that helped them snowball leads.

Misfits should probably continue with that strategy. Despite Longzhu’s loss yesterday, which was partly caused by some major team composition issues, early game teams have done fairly well. So how can Misfits maintain tempo against a team that can avoid it?

There might be temptation to ditch the early-game strats and scale with SKT. But with only a week to prepare for the biggest series of their lives, it would be unwise for Misfits to change too much. Adapting is good, but in a best-of-five, focusing on fundamentals is more important.

SKT have been lucky thus far at Worlds, getting out of four- and five-digit gold deficits by winning late teamfights. That’s been an SKT staple for years—stall until that one perfect objective fight wins the game.

It’s possible SKT win Worlds with that same strategy. But as their early-game struggles against EDG and ahq showed, they can be slowed. All it takes is one game where the teamfight initiation isn’t as clean, and SKT would have suffered a loss. They can’t keep fighting back from these deficits, can they?

One challenge Misfits will face is that SKT are much more accustomed to extending the lane phase than the teams they’ve played to this point. The LCK teams in general know how to spread gold and experience in a way that keeps games closer than they appear on the scoreboard.

They can’t let that get to them. Misfits need to continue with aggressive, proactive calls. Pro teams all know that those calls should be based around major map objectives, but against SKT, you can’t afford to wait for those objectives to become available. Misfits need move as a team to shut down SKT’s vulnerable junglers early and often. Han “Peanut” Wang-ho has become a better player this year, but he can still be caught out in his own jungle. There is an opportunity here.

Misfits will also have to be careful that they draft enough consistent engage on their side. Rakan is a top-tier support because of his ability to start fights and blow things up. Early game comps can sometimes lack in engage, which limits their later fight potential, as Longzhu painfully learned last night.

It will happen some day. Why not today?

Misfits come into the day as huge underdogs, even bigger than Samsung were yesterday. After all, Samsung were the top Korean team for much of summer—Misfits can’t say the same about their own region.

But what matters is that Misfits are the best EU team now. They have grown an incredible amount and aren’t done learning. SKT have to lose at some point. They can’t go undefeated until the end of time. Why can’t the day they lose be today? Play smart, and play together, and win or lose, Misfits should give us a fun, memorable series that they just might win.

But yeah, SKT’s got this.