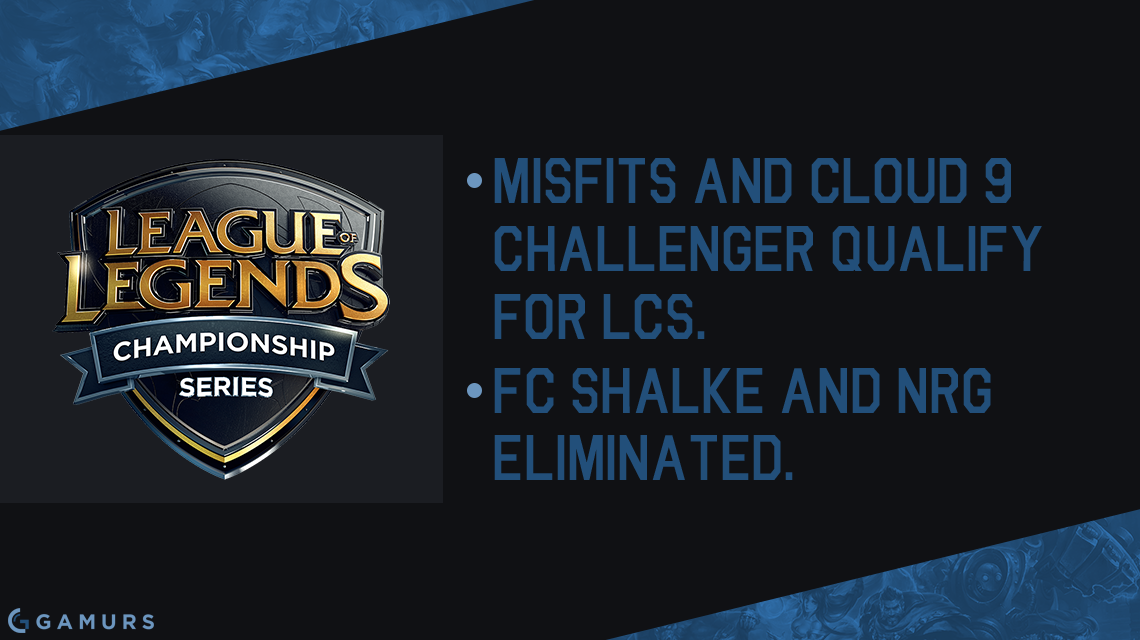 Both the European and North American League Championship Series promotion tournaments concluded this past week, and we now know who will be participating in the LCS next season.

In Europe, both ROCCAT and Origen managed to hold onto their spots. After a rough season with a 2-6-10 record, ROCCAT found themselves in a sticky situation. Having to play against Millennium, the team persevered and won their first set of games 3-2. Now facing off against fellow LCS team, the eighth place FC Schalke 04 Esports, they managed to pull out a 3-1 win and secure their return to the EU LCS.

Meanwhile, the highly praised Misfits were pitted against the second-to-last place EU LCS team, Origen. Led by the experienced Xpeke, Origen came out on top and pulled away with a 3-2 victory. The stage was now set for the Misfits to play against Schalke in one final elimination match, with the winner moving forward to pursue their dreams in the LCS and the loser relegated. After a four game series, Misfits came out victorious and joined the LCS.

Congrats to ROCCAT, Origen and Misfits and good luck during the Spring 2017 LCS split.

On the other side of the world in North America, we saw more controversy surrounding the tournament. In the first round of play, last place NA LCS team Echo Fox was pitted up against Liquid Academy. After a close five game series, Echo Fox held on and moved up to play against fellow LCS squad Phoenix1. In a decisive 3-0, P1 rejoined the LCS and Echo Fox was left to play former LCS team NRG Esports, who were beaten in another 3-0 by Cloud9 Challenger. Defying expectations, Rick Fox’s team was able to overcome NRG and return to the LCS, 3-0ing their opponent.

Congrats to Phoenix1, Cloud9 Challenger and Echo Fox for requalifying and good luck to them during the Spring 2017 NA LCS split.

Stay tuned to GAMURS to find out what will happen to the C9 Challenger spot and who will be taking over it.

While Cloud9 Challenger showed they had the better roster, fans have shown their discontent for the team’s success. Essentially a squad of LCS players, Cloud9 has been able to put together a roster of players objectively too good for challenger in order to secure and sell an LCS spot. Many fans have even called for the rules to be changed next season to prevent this from happening.

The loss of Schalke and NRG also raises many questions for the competitive League of Legends community. Will big money investors be afraid to enter the scene knowing that they might not be able to stick around for more than one split?

What did you think about the relegation and promotion tournament? Let us know in the comments below or tweet us @GAMURScom.