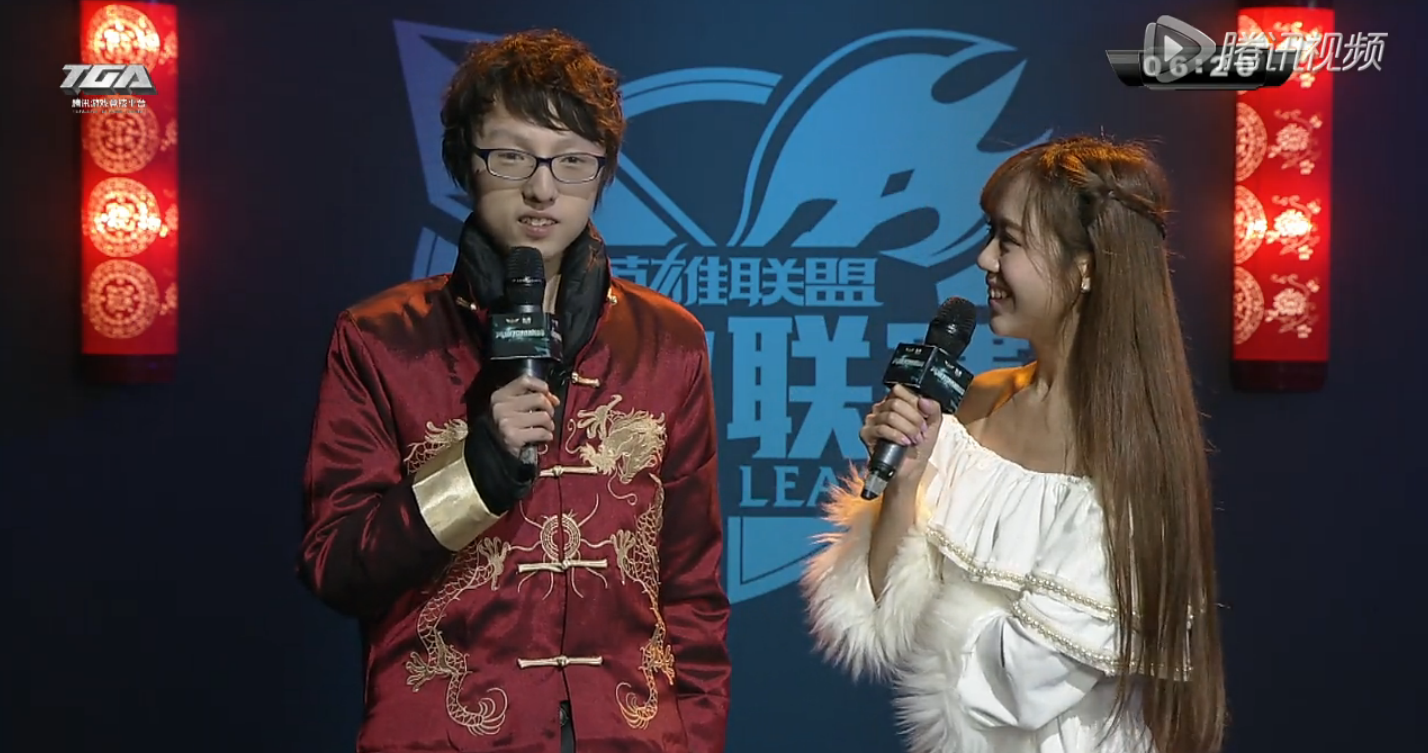 Welcome back! We’ll be interviewing the jungler that just secured two victories in a row, Mlxg! Why don’t you take this time to say hi to everyone?

These two games were beautiful. The second game, especially, was very exciting. You didn’t have a lot of advantages in the early game but you managed to suddenly turn the game around. Tell us about this last game.

Mlxg: In this last game, WE lane-swapped so we just continued to farm. By the time we were in mid-game, they had dragon controlled really well. So I got really anxious; I wanted to start a team fight. I started two team fights and I wasn’t able to find any opportunities. Instead, we ended up on the short-end. But later on, we were able to cut down on our mistakes and we weren’t too eager about starting a team fight. So we were able to slowly fight back.

Even though you had some mistakes early on, you were able to stabilize yourselves. In fact, that moment when you took baron was a turnaround point for you guys. Who made the call to take it?

Mlxg: All five of us said we needed to get it.

Ah, I see. It was then that you realized the timing was perfect to take baron. So you all went for it.

I was watching your game and it seemed like all five of you were so excited! When the games are more back and forth, it must be more interesting for the players.

Mlxg: The main thing is, it helped boost our morale.

Yes, with games where you lose the early game but turn it around late-game, it’s something that really boosts your morale. In your first game, you picked Rek’Sai and in your second game, you picked Rengar. They’re both on the aggressive side of the jungler pool. Did you choose them because you normally like to play junglers who are good at initiating a team fight?

Mlxg: Yes because my team depends on me to initiate these team fights. I prefer these junglers who are good at initiating team fights.

I feel like you have a lot of weight on your shoulders. We know that the person who initiates team fights has a very important role to fill. To make the decision of whether or not you can take a team fight is integral to the success of the team. Do you feel like the pressure is big?

Mlxg: The pressure isn’t that big because this is something I need to do, after all. If I have to initiate a team fight, then I’ll initiate it. The better I perform, the more help I can provide my teammates.

Your performance today was really excellent, Mlxg. If you had to rate yourself based on your performances today, which game did you feel more satisfied with?

Your performance using her was more outstanding. There are a lot of jungle champions now. Who is your favorite champion?

Mlxg: Before, it was Elise, but right now, there’s no way we can bring her into competitive matches. So right now, it’s Rek’Sai.

Elise isn’t too strong so your new favorite is Rek’Sai. I see. No matter what, you must feel pretty good after winning two games. But you have a long way to go down the line. We hope that King will get better and better with each step.

Mlxg: I hope we play better and better.

Mlxg is the type of player who’s so aggressive during his matches but is so shy in real life. We hope all of our players can play to the best of their abilities!