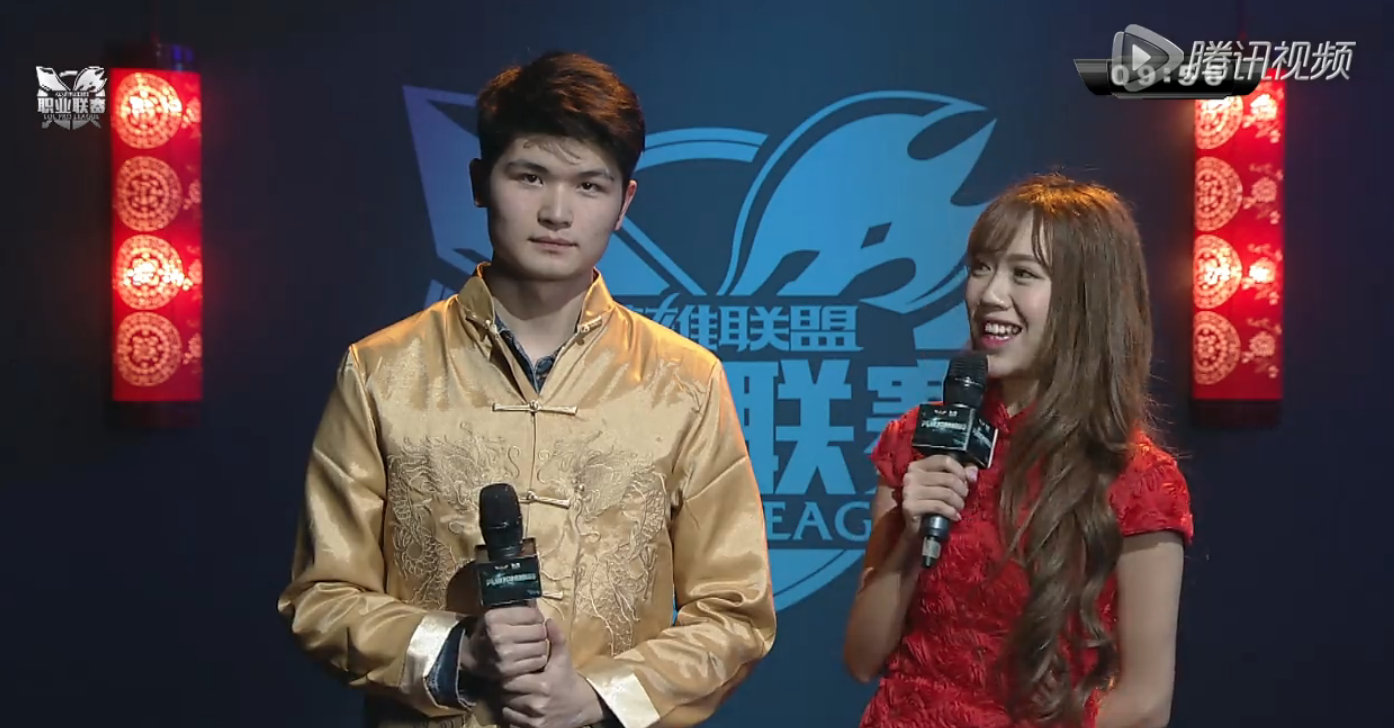 Welcome back! We’ll be interviewing OMG’s mid-laner Cool today. Why don’t you start things off by saying hi to everyone?

Happy New Year to you too! How do you feel wearing a traditional golden Tang jacket?

Cool: I feel like I’m a lot taller and imposing, as a whole.

Some workers here have said that this golden Tang jacket looks a lot like the emperor’s court robe. It has a very traditional feel to it. Anyway, today, you played beautifully – you managed to pick up the champion you’re known for – Ahri. Well, let’s talk about the first game. Your first game was really a bit of a shame. We’re not talking about losing or winning. Both sides played wonderfully. It was a really exciting match and we really enjoyed watching it! Could you tell us briefly what happened in the first game?

Cool: Well, first off, in our first game, there might’ve been some problems in picks and bans that left us unsatisfied. We didn’t get the choices we necessarily wanted. Another thing is we made some mistakes in the jungle and our mentality became more unstable and impatient. So it went down like that and we lost the game.

[reference: in the early game, We1less roamed around in red-side jungle as Ahri and managed to secure a triple kill]

After the first game, did you have a team-meeting to make corrections? It looked like you were able to fix your mentality in the second game.

Cool: After playing the first game – and when all is said and done – we’ve played a lot of games, fixing our mentality is a very simple and easy process. We just hope that when we play, we aren’t too anxious.

This is the advantage of being a veteran team. Their experience in big tournaments can help them fix their problems. You seemed to have played more aggressively. Did you feel like your team composition was better this time around?

Cool: Compared to the first game, our team composition in the second game was really good.

You managed to get a solo-kill with Ahri early on. Was it because you were restrained a lot in the first game? You couldn’t tolerate it anymore, right? Haha. How would you rate your Ahri in this last game?

Cool: I’ll give myself 70% because in the mid-lane, even though I was playing aware, I still ended up playing a little too unrestrained. As a result, I was caught out.

But you were still able to stay consistent until the end. After watching a few team-fights, it seemed like everyone played pretty well. Everyone did what they were supposed to do. So it was still successful. OMG seems to have completed their last game in the year of the Horse.

Cool: I also want to wish everyone a happy new year. I also wish you a prosperous new year. Also, give me red envelopes. Right here, in front of me, is an online payment that links to my bank account. I hope everyone will give me some money, haha.

You really think our workers will put an online payment form in this video? No worries, I know it’s just a joke. Now to my main point – are you happy with your teammates’ performances today?

Cool: Losing game one today was really a shame. We originally thought we could get those three points. After losing the first game, you could say that we didn’t achieve the goal we intended.

Don’t worry. Work harder in the upcoming New Year! We hope to see more outstanding performances from you all in the New Year! Thank you for interviewing with us today, Cool!