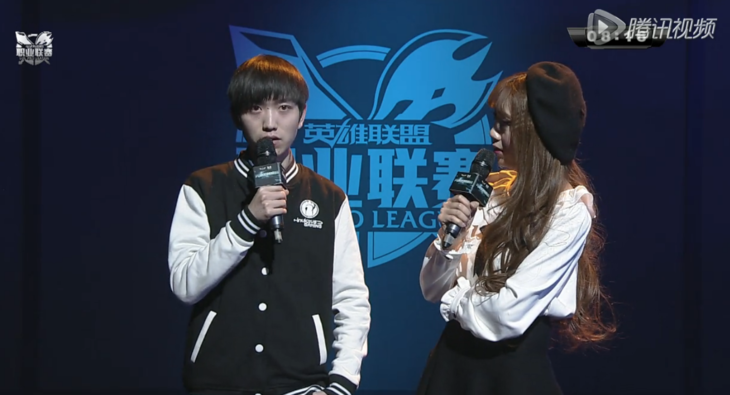 Welcome back to League of Legends 2015 Spring Season! I’m Baobao and I’ll be interviewing the player who managed to get a full 3 points in each game – Kitties~

You have to say your name!

You played two games of Janna and your performance was really excellent. Why do you like this champion so much?

In the first game, there was an incredible highlight – we also saw it during the commentaries. There was a moment where your opponent invested a number of their abilities and you managed to flash-ulti in.

Kitties: In that skirmish, I originally almost died. So I used my ulti and managed to regain some health. Xerath hit me two times and I managed to hide away the third time, so it was fine. I had some good luck.

Luck? Gosh, you’re so modest. I feel like players who like to play Janna should consult your plays. We can say your last two games went pretty smoothly. Your second game, compared to your first game, went a little more smoothly actually. Could you talk to us briefly about that game?

Kitties: We had good vision in the early game. We could see the other side’s movements. Annie and Jarvan both really wanted to do something. We got dragon, and put down vision. When they tried to initiate a fight, I had a way to protect my team. Since our mid laner was Cassiopeia, it doesn’t work if they try to initiate a fight with her. And he can’t initiate with Ez since he’s too far away.

So there’s a standard movement of events when you team fight.

In the second game, you really researched what to focus on.

Kitties: I feel like when the team composition is good, we can fight.

Your team composition was a lot better in the second game so everything went a lot smoother. As a whole, iG’s record isn’t bad. But it seems like last week your performance wasn’t too great.

Kitties: Last week, everyone’s mood and mentality wasn’t so great and we also had to play some really strong teams. So losing wasn’t something we could prevent.

When we went back, did you have a meeting to fix things?

Kitties: Yes, we all discussed it. We’ve been practicing really hard.

So the results are in. You managed to score three full points for each game in your 2-0 victory. Do you sometimes fill the shot-calling role of your team?

Kitties: Sometimes I’ll say a little but usually everyone plays safely in the beginning.

What I remember about you in particular is – last week I interviewed Kid about your ambush from the baron pit[reference: the entire iG team hid in the baron pit and just picked off 3 players when they went to face-check]- he said this was your idea.

Kitties: Yes. At the time, our opponent had no vision. So we just sat there and picked people off. We picked off 3 players.

From the outside, you seem like the most polite player but during competition, you’re definitely more scheming.

Why don’t you give a rating for yourself? Or for your team?

Kitties: There are some areas we’re pretty bad in.

You need to refine your play, no?

Let’s cheer for Kitties and iG. We hope that down the line you’ll improve.