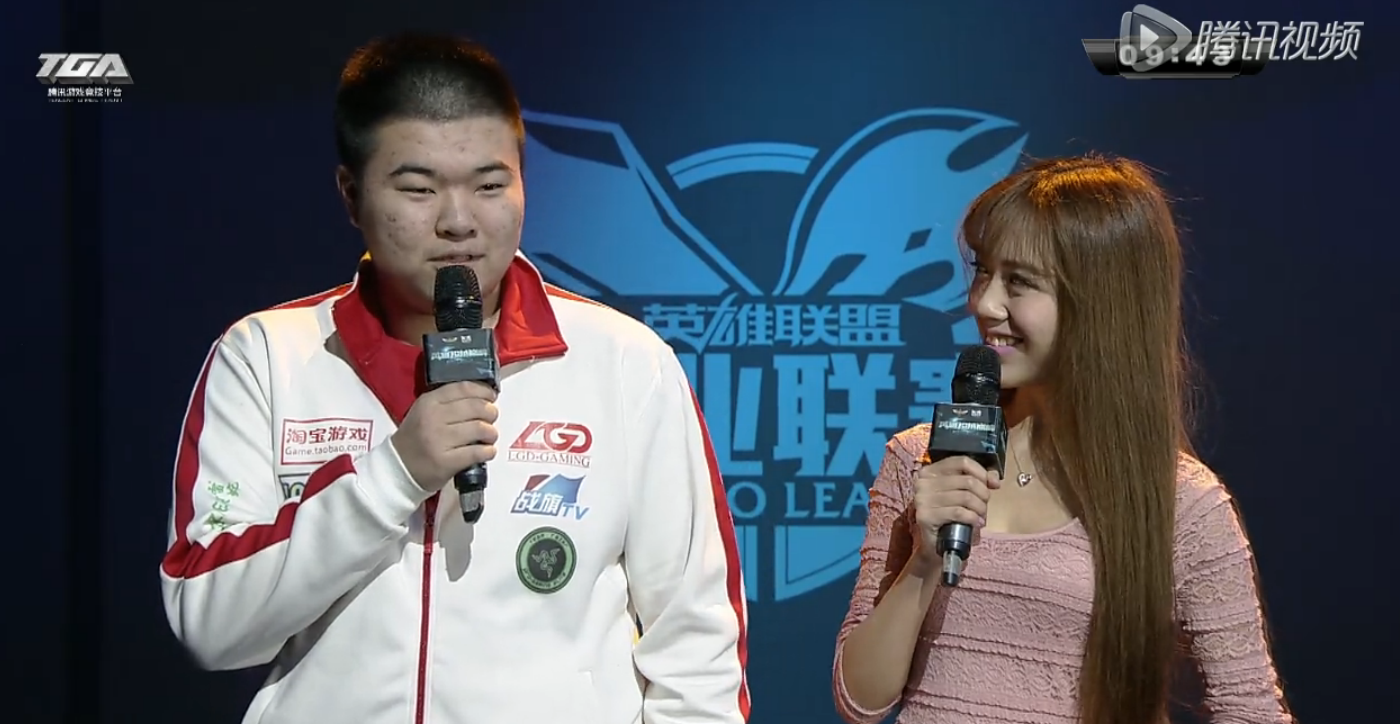 Welcome back! I’m Bao Bao. Congratulations to LGD for their 2-0 victory against Royal Club. Today, we’ll be interviewing LGD’s mid-laner – We1less. Say hello to everyone!

Both games seem to have gone pretty smoothly today.

How do you feel about it?

The state of your team is pretty good recently, right?

We1less: Yep, our team’s state has been pretty good.

You just played mid-lane Nidalee. Recently, we’ve been seeing more jungle Nidalee play because of the new changes in the patch. What made you pick mid-lane Nidalee? I feel like we haven’t seen that in a while.

We1less: The main thing is this champion is very mobile, even before 6. At level one, you can use her ultimate to change into cat-form. Also, she’s a good champion to use because of her synergy with the jungler and support to control vision in the enemy jungle.

We1less: Before level 6, she’s pretty strong in lane. But after level 6, her ability to transform becomes weaker, and the damage output scaling on her spear isn’t as strong.

I used to really enjoy playing this champion but they changed her so that you could use her ultimate at level 1. I felt like I didn’t really know how to use her anymore. Could you give us some details and tips on how to play her? What do you build on her?

We1less: Her build in mid-lane is still the same as before. You build Athene’s and Rabadon’s. But her play style is a little different. Before, you just put out damage from behind the back line. But if you want to put out a lot of damage now, you have to use her cat form and get into melee range. You have to make sure to avoid any kind of crowd control or skill shots and be careful not to get hit.

So you really are put to the test now.

We1less: Right. You can only put out damage if you’re alive.

On online fan wrote in a question to our show on QQ: How come we never see Brand in competitive play?

We1less: Well, this champion is really squishy and his range isn’t good enough. It’s not like he’s a tank and it’s not like he’s an assassin. He also has no escape. The way his abilities scale is also really unstable.

As a mid-laner, if you can’t protect yourself, then you’ll have no way to deal out damage later on.

LGD’s games have gone pretty smoothly. They’ve placed in the top four teams currently. Right now, are you satisfied with your team’s performance?

We1less: These past few weeks, I feel like we’ve done okay. But before that, the state of our team was pretty weak. In fact, I felt like my own state was on the weaker side.

The truth is, you can’t always be perfect. Teams have ups and downs. How do you go about fixing it?

And steady your mentality.

We hope that LGD and We1less can keep up their current state and play better and better as the series progresses.