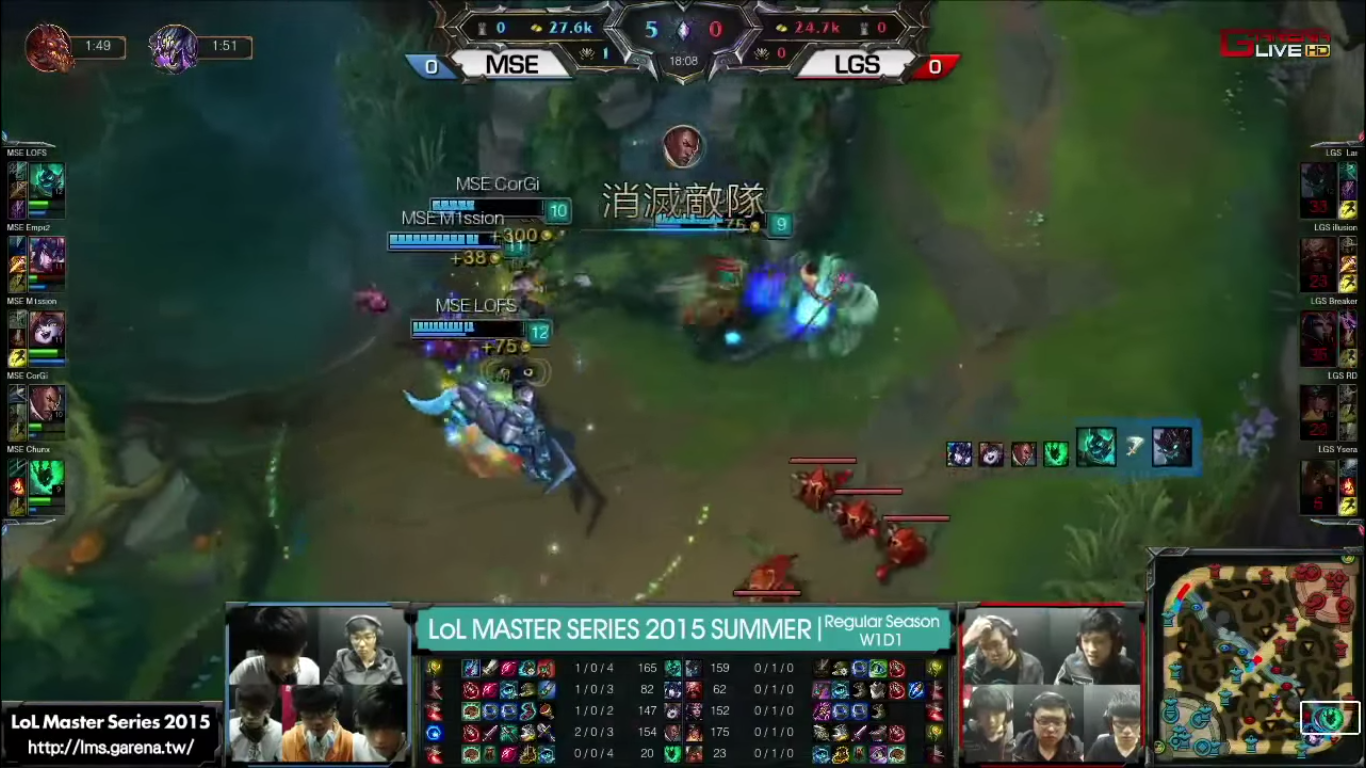 The match to lead off the summer split of the LMS was between two bottom half teams, one seemingly destined for mediocrity, and the other, a promising sophomore team. Both teams in this match debuted their new mid laners and looked to define themselves as contenders.

The first eighteen minutes of the game was nothing to behold, as both teams passively farmed However, Logitech failed to make any aggressive move aside from a botched gank in the bot lane. MSE struck first in the best of two, acing Logitech in the bot lane at the eighteen minute mark for the first kills of the game. MSE easily snowballed this lead and took the first game.

The second game followed an incredibly slow pace with with no champion killed until the twenty-eighth minute but Logitech had creep score leads in both the bottom and the mid lane. Cassiopeia and Jinx would easily outscale Sivir and Vladimir in damage as the game progressed. MSE failed to make any game altering plays and the Snipers took the second game.

This match is very interesting in particular as it features seven players that have all played for the TPA/TPS organizations, both being headlined by members of the Season 2 World Championship Taipei Assassins. HKE would also be debuting their rookie, Korean AD, Raison.

The first game went as expected, HKE showed their superior teamplay, only allowing one tower, claiming four dragons, and crushing AS in thirty six minutes. HKE would lead by 22k gold by the end of the game. It seemed that HKE had an easy 2-0 on their hands.

However, in the second game HKE was faced with more pressure from AS. HKE’s jungler Dinter continually found himself out of position, an obvious communication breakdown from the team. AS pulled off successful mid game teamfights and a baron to propel themselves forward while Achie on Azir led AS to victory against the bruiser filled comp of Gnar, Gragas, and Chogath.

The Taipei Assassins and Flash Wolves placed first and second in the last regular season, showcasing themselves as top teams in the league. Most notably, TPA was utilizing Domo as a sub jungler rather than their current jungler, Pony during this week of the LMS.

TPA proved to have stronger teamfighting and stronger laning in this matchup. TPA led by as much as 4k gold, but, the Flash Wolves stayed in the game with strong map play. FW kept up in turrets and even secured a baron, stalling until Maple’s Azir tore through TPA in the final teamfights.

TPA’s lead would not grow as large in the second game, as they held a meager lead. Despite Chawy having a good showing on a pocket Lux pick,  the Flash Wolves once again took control of the map and forced TPA to play their game into another Flash Wolves victory.

Ahq seemingly used this series for testing as they played Bard in both games to much mid-late game success. However, Machi would accrue small early leads in both games by punishing the Bard pick during the laning phase. Ahq had no issue making up for these small early deficits, continually edging Machi out in teamfights and dragon control. Ahq thoroughly outclassed the rookie team in both games.

Machi was not without its victories though. The team itself proved to be mechanically competent, in competing with a top team. Bot lane and jungle communication was rather strong considering they don’t speak the same language. Additionally, both Republic and Dee showed the potential to be top notch carries in the LMS. Republic even solo killed Westdoor in the second game, in the Ezreal vs Chogath matchup.

TPA, at one point was 5k gold down in the first game, but stayed relevant with turrets and dragons. Much like the rest of the teams this week, MSE lost control of the game once TPA outplayed them for a baron. TPA drove game 1 home on the back of this and Chawy’s exceptional Orianna play. The second game was not nearly as close.

TPA dominated the laning phase and never took their foot off the gas pedal, cruising to a 31 minute win, with a gold lead of about 11k. M1ssion in particular was incredibly outclassed by Chawy, giving TPA a point of power in game 1, and of course another winning lane in game 2. TPA’s Lupin showed more willingness to commit to aggressive plays than he has in the past, a problem for the team in the past. Although, the team  still showcased its unnerving passivity, even with a lead.

It was pretty clear from the get-go that the Flash Wolves weren’t taking the Snipers too seriously. They ran MMD, their mid lane sub, in the top lane for both games of their best of two. They were also noticeably “sloppy,” not playing the map too actively. Regardless, they had no problem taking out the Snipers in 34 minutes in the first game, with a gold lead of about 12k.

In the second game, the Flash Wolves ran Ryze in the mid lane, largely considered by the community to be sub-optimal. This did not stop Maple and the Flash Wolves from owning the game however. FW took the game in about twenty nine minutes, while also accumulating a 17k gold lead. This victory makes it pretty clear that the gap between top two and bottom four is still just as large as before.

There were no real upsets, with the exception of AS taking a game off HKE, but it is pretty clear that there won’t be a repeat of Dream or Reality in the LMS (0-21 record) as the scene has more competitive teams and players. The LMS likely won’t be the same top four/bottom four split seen in the past, as teams rise to challenge teams like HKE and TPA.

However, the line between the Flash Wolves and Ahq and the rest of the LMS is still very much defined, as these teams also have proved to be able to beat Western teams. Time will tell if the rest of the league will be able to rival the cream of the crop.

Make sure to tune in to watch the games at twitch.tv/garentatw from Wednesday to Friday or VODs on the Garena channel!