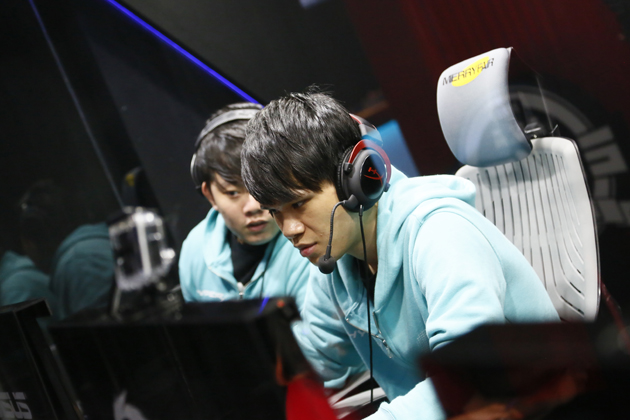 HKE is currently at the top of their game, sweeping three of their last four best of 2s, even splitting with Ahq in the last week. The team’s revitalization comes from an increasingly synergized bot lane, proper usage of solo lanes, and Dinter improving his jungle pathing. The Logitech Snipers continue their relative flatline, only able to split with other teams at best.

HKE dominated LGS much like other top teams have, edging out the Snipers with 10k+ gold leads in both games, destroying twenty turrets to a mere three from the Snipers. Dinter continued his good play on Gragas, participating in 30 of 39 kills and not dying during the two game series. Breaker from the Snipers showed some good games on his Cassiopeia, solo killing Toyz in game 1, but did not have enough of an impact.

MSE’s Koreans have taken a toll on the shotcalling and macro play that allowed the team to rise in the standings from last split. Teamfights are much less crisp and there are clear miscommunications in the early game. Machi on the other hand has improved with an all national lineup, even being able to take a game off Ahq last week.

This series was defined by constant teamfighting between the two teams in the mid and late game. Machi had a leg up when it came to teamfighting due to only having one language on the team and was able to take game one. However MSE showed stronger decision making and this would solidify game two for MSE, being able to deal well with Machi’s Trundle support pick, as caNdy performed well on Cassiopeia.

TPA’s Chawy continues to perform admirably in a team that has struggled all split to find an identity after the departure of Winds. AS continues to be the fun loving team that tries their best in game, but not so much out of it. Notably, this game is a clash of nine current/former Garena (the company that sponsors TPA and sponsored TPS) players.

TPA rebounded this time around against AS, after being 2-0d in their last meeting. TPA had a superior laning phase and early game, shutting down AS as they played fairly passive games attempting to not lose, rather than win. Chawy and Lupin were the key factors, outperforming the opposing carries in lane and in team fights. Considering this is a mostly down season for Lupin, it is good seeing what made him the best AD in the LMS last split.

HKE looks to be the first team to be able to challenge the top two after taking a game off Ahq and sweeping their other opponents in the meantime. The Flash Wolves continue to incorporate KKramer into their comms, while he also finds synergy with his support, SwordArt. Both teams look to compete for a spot at Worlds in the upcoming weeks.

HKE snowballed heavily the first game, running another successful poke and disengage comp with effective side lane management and great teamfighting. The second game went more Flash Wolves’s way as they developed strong leads in the early game, but were seemingly still behind HKE in map movements and objective control. Despite this, the Flash Wolves bested HKE with a superior teamfighting comp in this 54 minute long game.

Mountain was subbed out for wrist pain last week and looks to be back with Ahq this week. Ahq bled for the first time last week, dropping a game to HKE and Machi 17 and now look to secure more series for playoff seeding. MSE proved unable to deal with the Flash Wolves last week as they still trail behind top teams, settling in the LMS middle ground.

Ahq fell behind early in both games to MSE this series. MSE in both games held small leads in the laning phase due to Empt2’s proactive counterjungling and caNdy having incredibly favorable lane matchups against Westdoor’s Diana in both games. However, Ahq picked the right fights in game one and took that one rather easily. Game two was slightly trickier as Ahq took questionable fights against caNdy’s Cassiopeia, stalling out the game. However, the game was not in relative danger and Ahq would sweep the series.

Logitech at this point is not going to contend for the playoffs and is locked into relegation. They will spend most of their games deciding who is going to stick around in the offseason. Machi on the other hand still has an outside chance, but is developing synergy with HanJi and Apex, while learning how to properly shotcall.

Logitech and Machi do not play a clean game and this was more clear than ever in game 1 when Machi won. The game averaged almost a kill per minute with 33 at the end of the 34 minute game. Dreamer once again performed well on his Trundle, participating in fifteen of eighteen kills. Logitech would execute a much cleaner win game two with RD leading the charge on Rek’Sai, participating in fourteen of sixteen kills with a score of 3/3/11.

Garena announces its decision to ban Raison for one year on account of his elo boosting in Korea before his time as a pro player. Hours later, HKE faces the Garena sponsored team, TPA, Raison and all. HKE earlier in the week faced the Flash Wolves and looked to be the second best team in Taiwan after outplaying them on many fronts, even if they only went 1-1. TPA had no issues taking down their blood brothers AS with an easy 2-0, keeping their playoff hopes alive.

HKE came into this series as a huge favorite, but fell behind early in game one as TPA showed signs of life. In this series, TPA’s early game shows to be significantly improved, but still has late game shotcalling issues. This allowed HKE to come back in game one, although it took almost an hour to do so. Game two, while still challenging for HKE was much cleaner and ended in thirty nine minutes. Lupin was notably revitalized in this series, outperforming Raison in both games for his team. Chawy also had more of an impact on the series than Toyz did for HKE.

The Flash Wolves splitting with HKE makes a clear 2-0 here important as they need the points to separate themselves in the seeding. However, AS is not a competitive opponent with the top teams so this in theory should be no issue for the team.

The Flash Wolves proved this thought to be correct as they methodically steamrolled through AS in game one. However, AS challenged in game two off the back of BeBe’s splitpush Vayne, consistently soloing out Steak. The team would put immense pressure on the base, but in the end the Flash Wolves won at a 2k gold deficit as Kkramer backdoored for the win on Kalista.

AS and MSE share several characteristics. Both are teams with strong talent within the region, but are plagued by an inability to shotcall in their current forms. AS is a team that tends to fight often and MSE is a team that struggles to collect itself, so if AS is going to take a game off a top half team, it is going to be MSE.

While MSE looked to be playing better in game one, they often mispositioned around important objectives such as the Baron and the Dragon, with Stitch contributing much to this. Achie’s Jayce and Maplesnow’s Rumble were important to this comeback. Game two was a very clean win for MSE as they managed to turn a small early lead into the game, capitalizing on AS’s inability to pressure objectives or towers.

The sister teams face off as polar opposites, as Ahq shows itself off as the LMS’s flagship team. On the other hand, the Snipers are the worst team in the league and are similar to NA’s recently relegated Winterfox. The team has players that can fill out other rosters neatly, but is unlikely to be relegated.

The series was likely one of the most non-competitive best of twos in the LMS this split as ahq faced very little opposition throughout either of their games. Ahq is superior at every position and every stage of the game, outscoring LGS 43-16 and closing out both games in under thirty five minutes. Westdoor continues to search for answers to his champion pool as he played Diana and Talon in this series, using the inferior team to experiment.

All photos used from lms.garena.tw