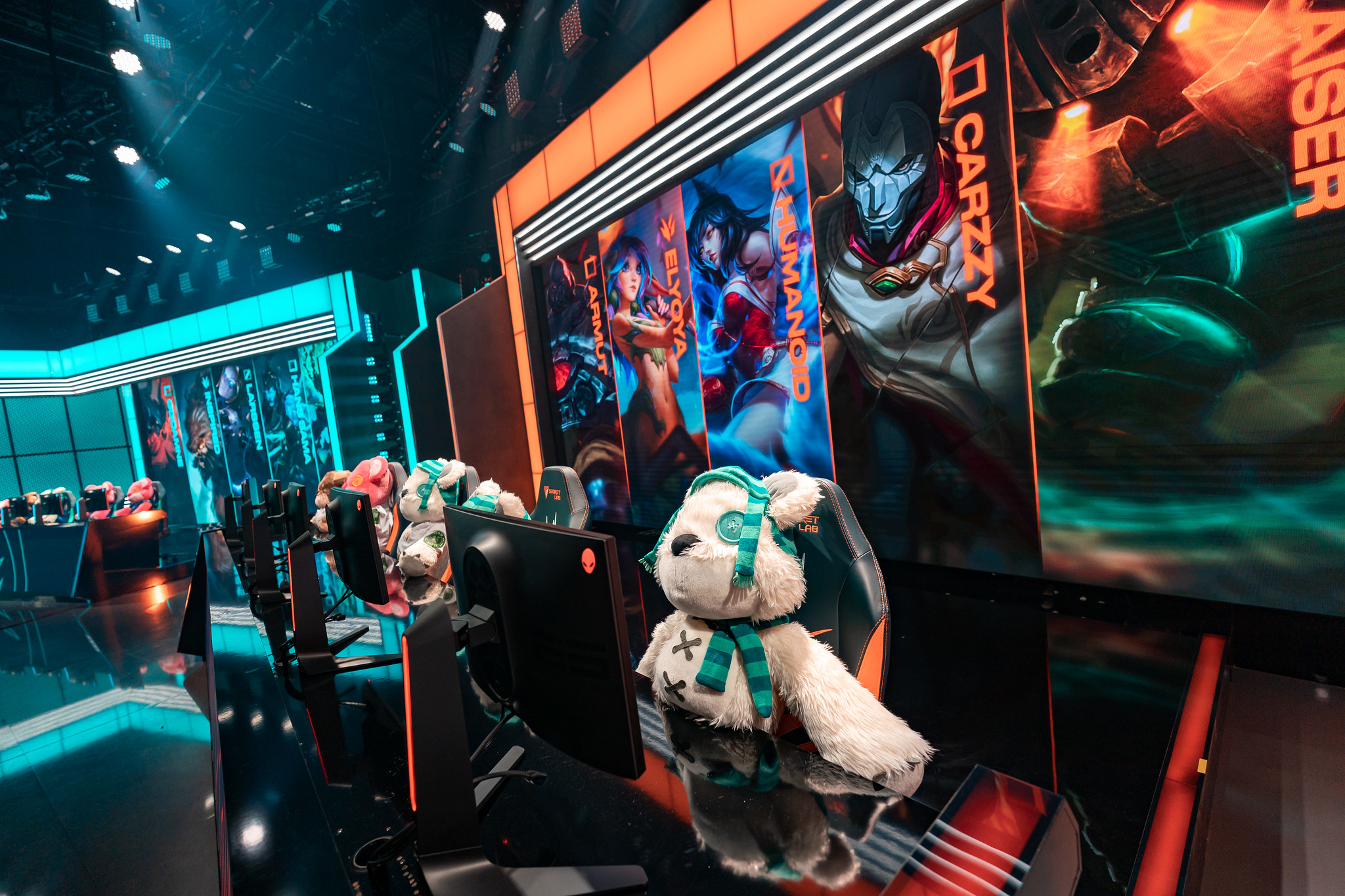 In what is perhaps the most evenly matched series of the weekend, Rogue and MAD Lions will close out the opening round of the 2021 LEC Spring Split playoffs tomorrow. Both teams found their first taste of success last year, bringing up talented rookies for each org’s first League of Legends World Championship appearance.

But their stories have diverged since Worlds 2020. Rogue have cemented their position as the second-best team in the LEC, going 14-4 in the regular season after upgrading their roster with changes in the top lane and support positions. MAD also opted for changes in the top lane, but have seen less success with their new roster than Rogue.

In their brief meetings so far this split, Rogue came out on top in a brutally dominating fashion. But those games were all best-of-ones. And if MAD proved anything with their full off-role match against Astralis, it’s that they’re not afraid of creative drafting. It’ll be up to MAD to pull off an upset against one of Europe’s best, else they’ll be nothing more than an easy hurdle in Rogue’s sprint to the finals.

This matchup offers one of the most interesting stylistic clashes of the LEC playoffs. With game times sitting at an average of around 33 minutes, according to stat tracker Games of Legends, this split’s games have been fairly short, meaning a lot of teams aren’t reaching the same kind of late game as we’ve seen in previous metas where average game times approached 45 minutes.

MAD are undeniably one of the LEC’s strongest early-game teams. They have the highest first-blood percentage in the LEC, securing the first kill in two-thirds of their total games played. They also have one of the fastest average game times in the league at 32 minutes and 20 seconds, according to Oracle’s Elixir. Their early dominance tends to be focused around the top side of the map, with jungler Elyoya shadowing Armut on strong early-game picks to try and snowball an advantage that can later be funneled into the bottom lane. This top side pressure has afforded them the first Rift Herald in 76 percent of their games, a surefire way of funneling gold into Elyoya.

But MAD have notoriously struggled to translate this early control into a clean mid to late game. Their win rate in games where they’re ahead in gold, CS, and experience at 15 minutes is only 61.5 percent, according to Oracle’s Elixir, which means they’re throwing away just under half of their early advantages. Their ability to control the map takes a nosedive post-15 minutes, securing the first Baron in only 50 percent of their games despite their incredibly dominant early games.

Rogue, on the other hand, have one of the best late games in the league. Their early game is decent, with the third-highest first blood percentage in the league at 61 percent, but their Rift Herald control rate is much weaker than MAD’s at only 45 percent. While MAD tend to look toward the top side for jungle pressure and objective control, Rogue favor the bottom lane and the all-important Elemental Dragons with Inspired taking the first dragon in 78 percent of their games.

But Rogue come into their own in the late game. They have the second-longest average game time in the LEC at 34 minutes, and once the in-game timer hits 20 minutes, they become one of the league’s scariest teams. They win an astonishing 91 percent of games when they’re ahead at 15 minutes and secure 58 percent of Barons in their games, second only to G2 in the LEC.

If Rogue can weather the storm of MAD’s early game, there’s an incredibly high chance they’ll take the series. MAD will need to draft with a hard focus on the early game, because there’s little possibility of them beating Rogue past 25 or 30 minutes. Conversely, Rogue will need to aim for scaling picks to get the most out of their game plan. The pressure of proactivity is on MAD, and if they’re unable to snowball one hell of an early lead, there’s a high chance they won’t be able to withstand Rogue’s victory avalanche.

A jungle matchup for the ages

It’s inevitable that all eyes will end up on the jungle in this series. Elyoya and Inspired have performed at the peak of their role all split and both of them are instrumental to their teams’ relative successes. Indeed, Elyoya finds himself in a similar position to Inspired in 2020: a young, unproven jungle talent with the responsibility of a playoff run firmly on his shoulders.

Statistically, the two are a fairly even match. They have the two highest KDAs of all LEC junglers with Inspired sitting at 5.6 and Elyoya at 4.7, according to Oracle’s Elixir. Their champ pools are notably similar, both favoring Lillia for her early-game damage and team-wide crowd control in the late game. Graves and Udyr have also made regular appearances for both players.

But Elyoya is a hard carry through and through, whereas Inspired is much more about enabling his laners. Elyoya has some of the most impressive jungle statistics in the LEC and is a reliable carry for his team. He has the highest kill participation of any jungler in the league at 73.7 percent and holds 26 percent of MAD’s total kills—an ideal state of affairs in what’s undeniably a carry jungle meta. He leads the league’s junglers in gold, experience, and CS at 15 minutes and has perfected the art of early top lane ganks into Rift Herald.

Inspired tends to prefer the bottom side of the map, with the heroic weak-side playstyle of Odoamne enabling him to focus his attention on early dragons rather than Rift Herald. This plays exactly into Rogue’s hands with regards to their late-game focus. Rift Heralds are all well and good, but if you plan on fighting in the mid game, you’ll find a lot more success in the bonus stats from drakes.

Ultimately, this jungle matchup is one that will be decided by top lane ganks. If Elyoya is able to break the impenetrable wall that is Odoamne, he can shatter Rogue’s game plan of leaving the top lane at a stalemate and snowballing through the bottom lane. If Elyoya’s ganks are unsuccessful, he’ll give Inspired free rein to work his magic in the bottom lane—and a fed Hans sama will make quick work of MAD’s backline in teamfights.

So, what are the odds?

Unfortunately for MAD fans, this matchup favors Rogue. When one team relies on early advantages and one on scaling for late game, the scaling team will inevitably be favored simply because all they have to do is survive. There’s no pressure of proactivity on them. If they can reach their item breakpoints, their chance to win increases astronomically.

Early-game teams put themselves on a timer and for every second the game progresses, their chance to win becomes more and more of a distant memory. Factor in that this split’s games have been, on average, fairly fast, and you’re faced with the undeniable fact that MAD have a small window to execute their preferred playstyle. But if MAD can bring it down to the wire and pull off the mother of all early games, there’s a chance they can sweep the rug out from under Rogue.

Early objectives will be the deciding factor of this game. MAD’s mid and bot lanes need to apply sufficient pressure to ensure Inspired isn’t able to just walk in and take dragons for free, while Elyoya snowballs around Rift Heralds and top ganks. Rogue, however, will need to set Odoamne up for success on a safe laning pick to avoid those fateful top ganks, while Inspired focuses his attention on the bot lane to snowball Hans sama on a hyper-carry like Kai’Sa.

One thing’s for sure: This series will be one of the weekend’s closest. There’s a high chance that whoever takes this best-of-five will be the team facing off against G2 in the 2021 LEC Spring Split finals. For Rogue, this match is a chance to prove they truly are the second-best team in the LEC and silence doubters who called them predictable, inflexible, and slow throughout the course of 2020. For MAD Lions, it’s an opportunity to show their 2021 roster changes leveled up the lineup and that their speed bumps throughout the regular split were little more than growing pains.