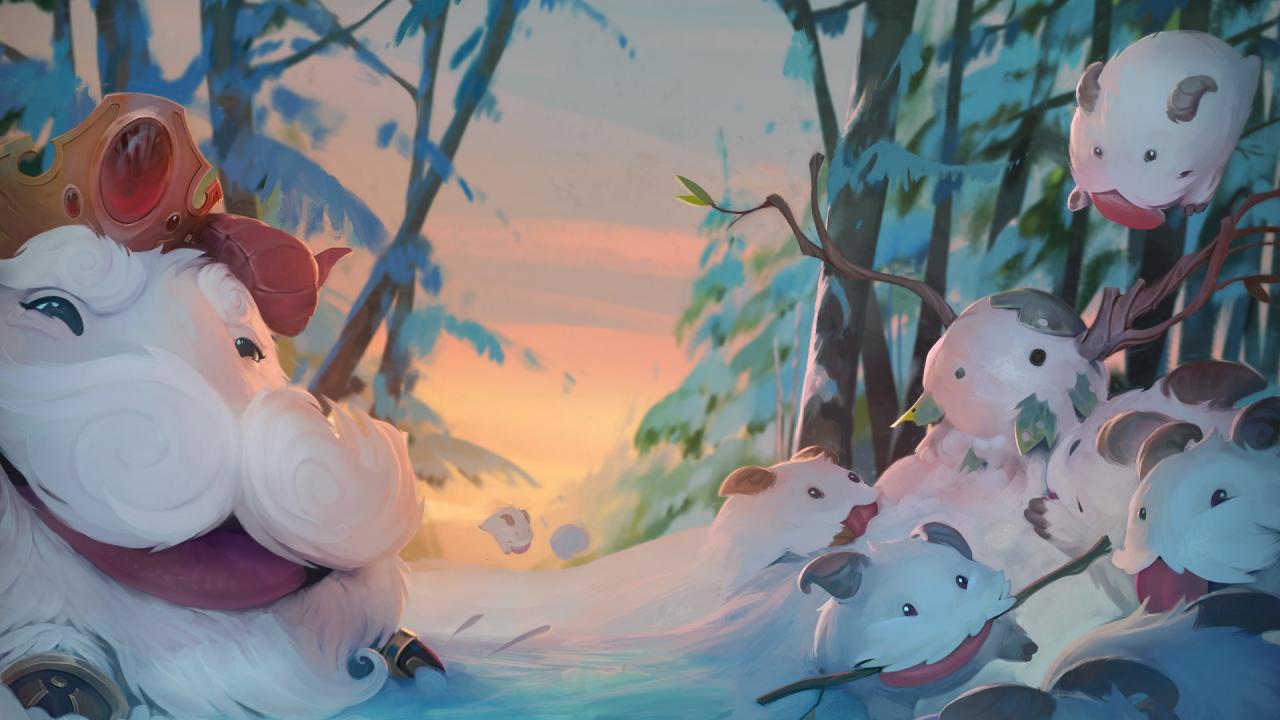 Christmas may be over, but winter is just getting started. And what better way to enjoy the season than with a holiday-themed skin?

Luckily, League of Legends has a ton of seasonal skins. Riot Games has been pumping out holiday content since 2009. With the Sugar Rush collection released this year, League now has a total of 44 themed skins.

Whether you’re looking for something festive like Santa Braum or wintery like Snow Day Ziggs, there’s likely a skin for you. Here are 13 of the best holiday skins in League.

In her winter wonder skin, Orianna dances around as a frosty ballerina reminiscent of a music box doll. Her erratic movements are heightened by a head pop that makes her seem more toy-like. Most notably, her ball is now a clockwork Poro with a propellor and adorable rosy cheeks.

But that’s not where the Poros end. When she uses Command: Protect, allies are shielded by a giant Poro hologram. And during her back animation, she calls down a circle of Poros and delicately spins in the center of them while wind-up music plays. Additionally, her W creates a giant snowflake animation.

Ice King Twitch is absolutely haunting. His jaw is made of ice and he shoots through enemies with shards of ice. Each auto is met with the piercing sound of ice firing and shattering. Most importantly, Twitch becomes covered in a tiny snowstorm when he stealths.

The shades of blue in this skin are both chilling and exceptionally seasonal. And even though Twitch is a menace to society, he has a moment of cuteness—well, cute by Twitch’s standards. During his back animation, he spawns a nice ice sculpture with Poros dancing around. Then he shoots the ice, causing it to crumble and freeze the Poros. Maybe Ice King Twitch isn’t the most joyful skin, but he’s a fantastic representation of winter’s bite.

Snow Day Ziggs brings us back to a place of childlike wonder, like tossing snowballs at friends, building snowmen, and setting ice traps to pierce through your enemies. You know, playful, normal kid stuff.

Earlier this year, Snow Day Ziggs received a VFX update as well. Now, all of his moves are painted with a frosty blue color and expel a flash of sparkly dust.

Christmas isn’t just happy times and cool presents. Someone is bound to get coal and Bad Santa Veigar is ready to deliver.

In this skin, Veigar takes on the Kris Kringle attire and prances around with a sharpened candy cane. He tosses cookies and presents that break on impact. And his W, Dark Matter, wacks enemies with ornaments that break upon impact and create a piercing crash SFX. Best of all, his E creates a deceivingly festive ring of Christmas trees and lights accompanied by sleigh bells.

Maokai is a tree, and for the holidays, he’s a Christmas tree. Get it? Festive Maokai is an oldie but a goodie. This skin came out in 2011 and still holds up as a fantastic icon. Maokai’s bright green leaves, along with a shining yellow star, make for a hilariously appropriate combination. His saplings become wrapped presents that turn Maokai into the centerpiece of Christmas morning.

Festive Maokai was updated in 2017 and sells for 975 RP. With the additional retouches and new ultimate VFX, this skin is a bargain.

Snow Day Bard is like the whimsical warmth of winter. He’s bundled in a cozy outfit with an icy instrument ready to travel the world spreading hot cocoa and picking up penguins. That’s right, his meeps have been replaced with adorable, tiny penguins that honk whenever Bard tossing one at an enemy.

His heal now spawns a cup of cocoa that rises up to reach a marshmallow and combine into a marshmallow hot chocolate. Along with icy sound effects and Bard’s jolly eyes, this is the perfect skin to keep players warm all winter long.

Nothing screams winter more than snowmen and Snownerdinger takes the cake when it comes to these frosty friends. For the holiday, Heimerdinger has been molded and formed into a snowman with a head too big for his body—and it’s fantastic. His auto attack consists of him tossing candy canes and his turrets become snowball firing sleds. The small turrets even have tiny Poros at the helm.

Though wonderfully winter-themed, Snownerdinger isn’t decked out with the flashiest VFX. But it’s well worth the 975 RP price point, given his clear and distinct snow transformation.

Jinx is already known for her mischievous nature. Add in a bit of elvish charm and she makes for an ideal holiday skin.

What makes Ambitious Elf Jinx particularly joyful is the transformation of her “toys.” Fishbones is turned into a cute but deadly wrapped present while Pow-Pow is now a toy train that Jinx rides during her running animation. Her back animation also features her riding around a toy track on Pow-Pow.

Sugar Rush Braum looks like a soldier who just came from the Candy Land castle. The vibrant pinks and purples along with the detailing on his suit bring Braum to the forefront of Summoner’s Rift. His giant ice cream sandwich shield looks so delicious that it makes us wonder: Are pixels edible?

His auto attacks create bursts of confetti and the intricacy of his chocolate road ultimate is marvelous. Each piece of chocolate has been detailed and the road is outlined by candy canes. That’s in addition to the sparkling glow coming from between the cracks and a silly SFX that plays upon impact.

Lastly, Sugar Rush Braum has eight chromas with colors just as vibrant and distinct as the original.

Equipped with a sled shield and snowball in hand, Singed is ready for the ultimate snowdown showdown. And instead of blanketing enemies in poison, he runs around covering them in a glittery trail of snow—a trail he creates by using the snow machine on his back.

Snowday Singed is a creatively thematic skin set at 975 RP. Other than a new outfit and a few color changes, it doesn’t stray too far from the original Singed, which is likely why the cost is low. Despite this, it remains unique and distinct.

Sejuani rides a Poro. A giant Poro. Do we really need to say anything else? This skin could have no special effects, no added details, no Sejuani, and it would still be one of the greatest skins ever created.

This creature is Sejuani’s war-poro, according to Poro Rider Sejuani’s release page. But she still uses her boar’s name, Bristle, during her joke voice lines. So we aren’t sure if Bristle was magically turned into a Poro or if there’s a breed of Poro specifically trained for combat. Either way, it’s adorable and we love it.

In addition to the massive Poro, Sejuani’s weapon has a giant Poro snack hanging from it and her moves spawn crystal snowflakes when an enemy is frozen.

This skin is the embodiment of the term sugar rush with crazed eyes, from assumedly consuming copious amounts of sugar, candy in each hand waiting to be devoured, and a satchel of goodies creating sweet, sweet explosions. Yup, this Ziggs is down with the sweetness.

Ziggs’ chaotic personality is heightened through this skin and we’re here for it. Sugar Rush Ziggs is ridiculously detailed even when considering its 1,350 RP price point. Each of his abilities features a different dessert, including his basic attacks in which he tosses macaroons. Additionally, each explosion from Ziggs’ kit is met with a gooey VFX splash. Add in the wacky sound effects and this skin is one of the most thematically cohesive cosmetics in the game.

As an added bonus, Sugar Rush Ziggs has six chromas, including a Halloween (Meteorite) themed chroma for double holiday madness.

League has seen many Santa copycats from Old Saint Zilean to Santa Draven and Bad Santa Veigar, but none can lay a hand on Santa Braum. It’s practically written into Braum’s lore that he’s Santa. A large man from the North with a big heart and a friend to those in need. How similar can the two be? Aside from obvious character traits, the VFX and SFX are the perfect additions to make this winter skin one to remember.

For starters, his running animation places Braum into a tiny sleigh run by tiny Poros dressed as reindeer accompanied by the ringing of sleigh bells. The leading Poro even has a red nose. His shield is now a fireplace with stockings hung with care and he shoots presents. The aesthetics of Santa Braum are all too canon.

These were just 13 of the best holiday-themed skins League has to offer. There’s plenty more to explore and a full list can be found on the League wiki.

Keep in mind a majority of these skins are available for a limited time during the winter season. But even if you missed out on a skin this year, they’ll be back next Christmas.