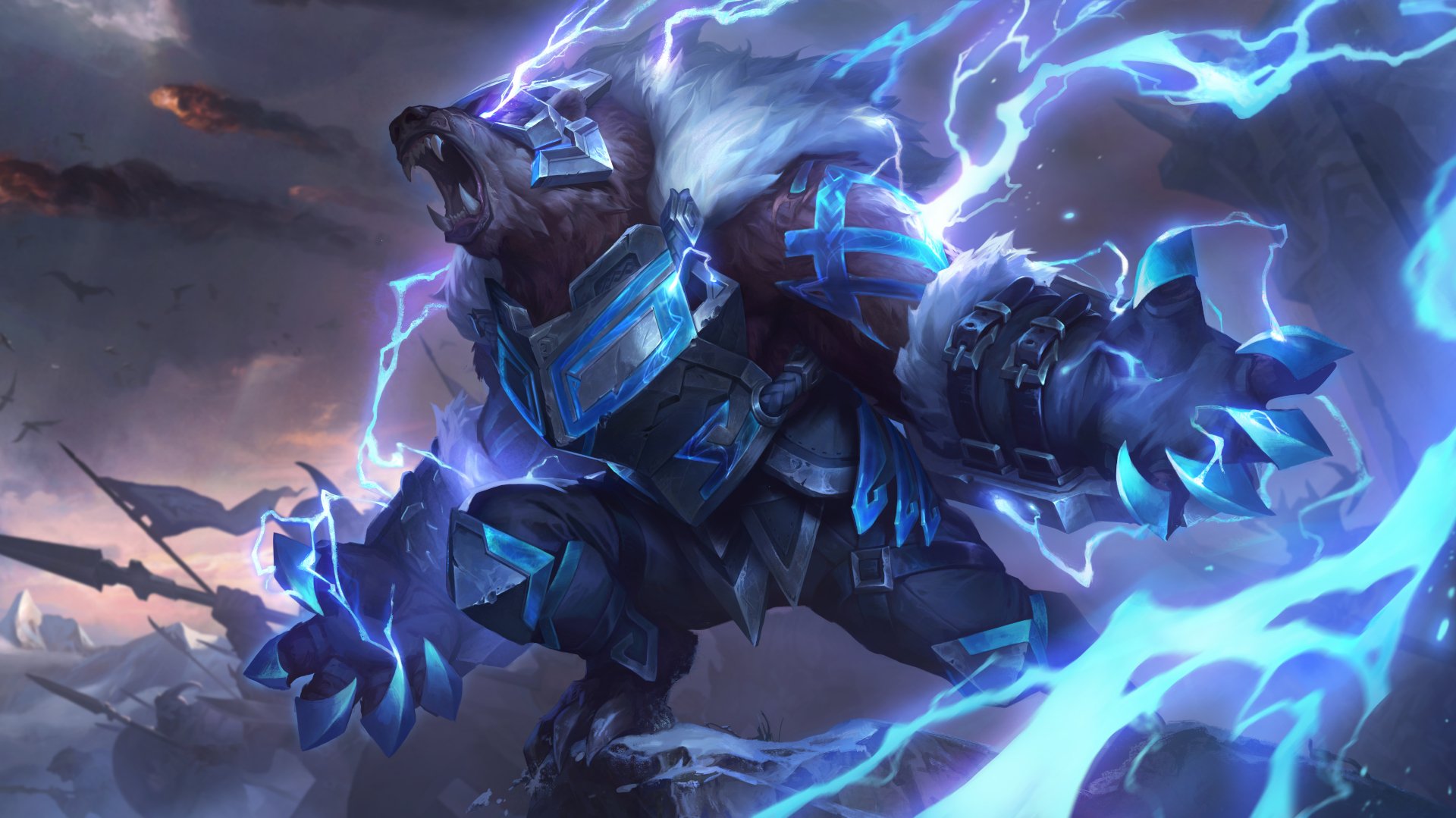 Volibear mains finally saw a glimpse of what the Thunder’s Roar will turn into later this month when Riot pulled back the curtain on the bear’s long-awaited and teased rework.

But to recreate such a beloved bear and make him feel unique—while still giving old Volibear players something to enjoy—was obviously a tough task for any team to take on.

Volibear’s remake began with a simple concept. Riot concept artist Justin “Riot Earp” Albers wanted the League of Legends champ to feel “old and ancient” to make his look match his legendary status in Freljord. The team wanted to shape the bear to showcase the culture of the Freljord and “wanted the wild fury of not only bears but of storms and thunder to be very apparent in his visuals.”

You can see that when you take a look at the character’s new splash art. He towers above mountains, showcasing his sheer strength and power. But the looks of the character weren’t the only thing that the team needed to tie down.

“For every VGU it starts with a rigorous selection process,” Ryan “Reav3” Mireles, lead producer of champions team, told Dot Esports. The process involved going over a ton of factors about the champion and bringing together a core team that includes “a gameplay designer, narrative writer and concept artist.” The team of three then worked together to collaborate on a concept for the champion.

With that team created, it was then time for the hard work to begin.

When first sitting down to decide how the champion would play, the team followed the same major three milestones that Riot uses to track progress for most of its champions: the Direction Lock, Pattern Lock, and Kit Lock methods.

Direction Lock refers to the team working on the project pooling ideas and making sure they’re all going down the right path. Pattern Lock is where the team shapes the character’s overall goals with questions such as  “How does this champion succeed? How do they fail? Can enemies interact with this champion in a healthy and strategic way?” according to League’s senior game designer Nathan “Lutzburg” Lutz. The Kit Lock, as it sounds, is locking in his abilities and kit.

During Kit Lock, the Riot team initially wanted to keep Volibear “firmly entrenched in the Juggernaut space,” according to Lutz. Ultimately, though, the team went in a different direction because Volibear’s “themes and gameplay identity were all pushing him more towards a fast, unpredictable diving style of combat.”

When reworking Volibear’s kit, Riot wanted to scrap an issue the original version of the champion had. Thanks to its original design, Volibear was stuck with the same gameplan over and over again, which was chasing down foes to instantly kill them. “This pattern felt too flat and frustrating on both side of the Rift,” Lutz said. This led Riot to change Volibear into a hybrid role, one where he still has high damage and can ramp into a duelist. While Volibear lost some of the advantages of being a juggernaut, the team added Vanguard-like abilities to make him a tanky diver and more balanced in their eyes.

The juggernaut style of play wasn’t the only thing to hit the chopping block, though. Riot originally had some alternative ideas on how it wanted to go forward with Volibear’s reworked ability kit. Originally, the team played around “with a mechanic that converted hard CC effects on him into slows,” according to Lutz. Ultimately, while the team was happy with the mechanic itself, it gave Volibear too much power when used in conjunction with his other tools.

The team saw more value in retaining other strengths, such as his high damage and crowd control. So they “ultimately decided to move away from the permanent unstoppability mechanic,” Lutz said.

Feedback from the community through the various dev blogs was also key to the champion’s recreation. Mireles said that all the comments made the process a “little bit easier” since the team could get feedback from players based on their reactions. This helped the team finalize the Volibear rework and get him ready for release, ready to move onto the next big project.

Or so they thought.

Little did the team know that alongside the champion, Riot would also create a new, first of its kind event. This ARAM event appeared on stream a few days ago, showing a giant Volibear spawn for a few seconds. All players who participate in the event will receive an exclusive Volibear emote that no one else will be able to get their hands on if they missed it—and apparently the whole process of how it came about was crazy.

The marketing team was the first to come up with the idea to do something in-game and it quickly turned into “a crazy collaboration between our marketing team and the Volibear development team,” according to Lutz.

“We did our best to respect ARAM players, who may or may not care about seeing a Volibear Easter egg (especially if they play ARAM as their primary game mode),” Lutz said. “This is why we made it somewhat rare and only last for a few seconds at a very predictable time. Minimizing the amount of disruption we caused was our top priority.”

But now, the team is done, the project is completed, and the long wait for a new champion or rework is a long ways away. Or so we think. Mireles couldn’t help but tease the upcoming next champion.

“I think the festival blossoming later this summer is something you can keep your spirits up about,” Mireles said.