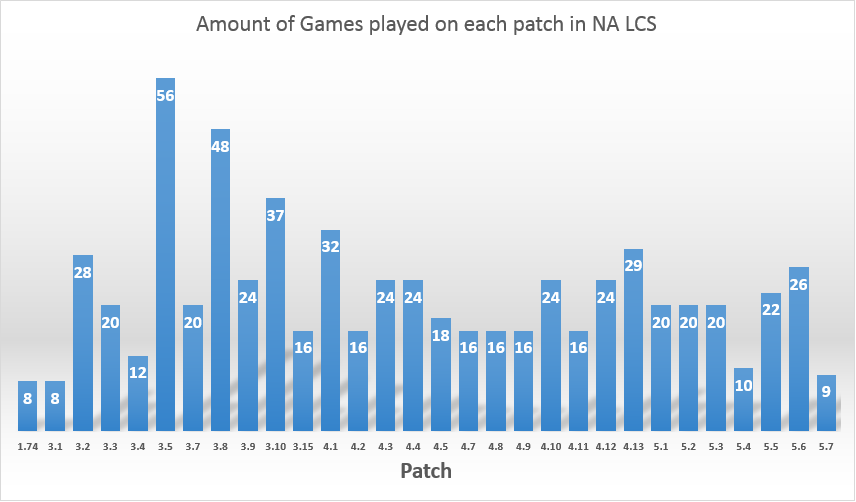 We, as a LoL community, strive to understand and define “meta” and how it relates to our every day gameplay. We identify the weak and strength points of champions, items, masteries, runes set up and we believe that knowing and abusing just the right aspect of the game will give us the edge to defeat the opponent. But due to the nature of the balance of LoL, the concept of liquid meta dictates that what is strong now potentially will become irrelevant tomorrow. Even a slightest change in a patch can drastically change the outcomes on the rift for weeks to come, and especially LCS.

After almost two and a half years,  North American LCS has hosted 659 games (including the playoff rounds) between more than a dozen teams, and every single game was unique in its own way. Despite having thousands and thousands combinations of champions to pick and ban, and millions of permutations of runes and masteries, the majority of the games still showed similar trends, like prioritizing similar strategies (4 man push tower before 5 minutes into the game) or abusing overpowered items. I decided to go back and take a look at how the average length of games would vary based on what patch it was played on, and compare to respectively to other patches and to other splits.

As mentioned before, 659 games have been played over the course of 30 competitive patches. The following column chart shows the amount of games played on each one of those patches starting with 1.74 (Season 3). The full resolution of the graph can be found here.

By purpose of this graph is to give you an idea of what was the distribution of raw data like among the patches and to give a representation of the size of the sample.

The following is a table containing summarized and partially analyzed data of all the game length times through out all the splits of NA LCS, followed by a line chart for visual representation.

As you can see, the minute labels on vertical axis start from 30; this was done solely to zoom in on the line trend itself and to make escalations of the line more obvious and easier to analyze.

Speaking very generally, by following the trend of the line, we can make observations regarding how the meta was playing out during various periods of time in competitive play. For example, both summer splits tend to have longer games than the previous spring seasons. The games tend to be shorter in the beginning of spring seasons comparing to the mid-spring season, and games tend to be the longest in the playoffs (which can be contributed to the psychological factor of people trying harder in playoffs comparing to regular games).

Or we can look at individual patches and try and analyze how certain changes shaped the meta to make the games longer or shorter. For example, patch 4.10 brought a huge amount of updates on champions and items. The Nidalee rework (reducing her AP play in mid), LeBlanc losing the silence on her Q, Twitch getting 2 nerfes on his ratios and time to stealth, and the life steal changes to AD carry items (including partial rework of Bloodthurster, and changes to Attack Speed Items). All of these changes came so quick, the games become drastically longer and it took a couple of patches (until about 4.12) for teams to adapt to them and understand how the meta has shifted. That patch was considered a huge nerf to some AD carries and signified the rise of Infinite Edge rush as first item on champions like Caitlyn, Graves, and so on.

We can use the data and the tools we have to see how the balance adjustments shaped the outcomes and the various aspects of the game. By taking a look at these changes, the concept of liquid meta becomes more apparent and relevant in understanding how the game works.

If you’re interested in taking a look at raw data in form of spreadsheets, you can find the original file here