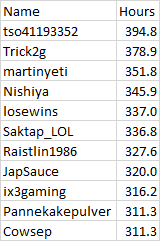 Ever wanted to know more data about your favorite streamer than how much RP they have banked? Now’s your chance.

Twitch offers a wide array of info via their API, including live viewer counts for all streamers who are broadcasting. Today, we’ll look at League of Legends streamer stats for December. These are gathered via Twitch’s API on a minute-by-minute basis. If you want to learn how to run your own instance of it, check out GitHub. Or don’t, and we can look at the data together like one big, happy family.

Overall Stats for League of Legends on Twitch

During December 2014, Twitch had 145,157 different broadcasters stream League of Legends for at least 1 minute during the month. Only Twitch knows how many unique viewers watched, but I can tell you they watched a lot. To be precise, 4,131,338,685 minutes of streams. That’s 4.1 billion minutes on League alone. That works out to:

For comparison’s sake, that is 125% more than Hearthstone, which we looked at yesterday. Like Hearthstone, there are huge differences between the viewership of the top streams and the majority of streams, although LoL isn’t quite as extreme. The mean League stream had 75.2 viewers, but the median viewer count and the mode were both 1. To compare it to income inequality, Hearthstone would be Namibia while League of Legends would be Bolivia. Sure, it’s not good, but at least it’s not the most extreme.

E-sports: As Big as Sports

Or close to it. It’s hard to wrap one’s mind around 68.9 million viewer hours, but let’s compare it to some of the televised championship games.

Roughly speaking, LoL on Twitch saw as much screen time in December (a month with less competitive play than normal) as ice hockey did during it’s biggest event of the year (Olympics excluded) featuring the two largest TV markets in North America (New York and Los Angeles). Even if those numbers don’t include Canada, the on-peak/off-peak comparison looks very favorable for League compared to North America’s long-time 4th major sport.

Not every name here is a household name, but you have to commend these folks for their dedication, and it might be worth it to check out some of their channels. This month’s leader, tso41193352, appears to be a Tawainese player who loves Zed.

Trick2g opened the gates for over 12 hours per day on average, and Cowsep wore a cow suit for an average of 10 hours per day. Honorable mention goes out to imaqtpie, who ranked 26th for the month with 272.6 hours on stream.

Not surprisingly, this list is dominated by current or former LCS pros, primarily from North America. The only exception in this list is Sp4zie, a Swedish gamer who started on YouTube several years ago. If you haven’t seen him before, it’s probably because you aren’t on Twitch during North American business hours. He mainly streams at 10 AM (EST) on Tuesdays.

If you want to get ready for the LCS, feel free to look at these numbers and begin chanting “TSM! TSM! TSM!”

The names on this list are nearly identical to the most popular streamers above. Interestingly though, both Nightblue and TheOddOne peaked soon after the release of Rek’Sai. We’ll have to come back some other time and see if the new jungle champion affected the numbers of jungle streamers or if it’s just coincidence.

Most Viewed Streams (Most Viewer Hours)

It’s no surprise to see imaqtpie at the top here given his popularity and the length of his streams. The only name that’s somewhat surprising here is Cowsep, who averages less than 1/5 the viewers of Bjergsen (4,665 vs. 27,050) but isn’t that far behind him due to the amount he streams.

Like Hearthstone, a significant portion of all time is spent watching only a few players. The top three received 10.2 million viewing hours (14.8% of all League viewing, including events/tournaments). The 11 listed above accounted for 23.9 million hours (34.7%) and the top 30 took in 33.8 million hours (49.1%).

Overall, December was a quiet month competitively, but it was still a busy, eventful time that raised a lot of questions. Did Cowsep get more viewers after Twisted Fate made an appearance in the jungle at IEM San Jose? What happened to Santorin’s numbers after he was officially announced as TSM’s new jungler? Did more viewers make jokes about SmiteVicious before or after Curse Academy made it into the LCS?

Find out the answers to those and more on the next episode of Streamer Stats! Same bat time, other Twitch channels.