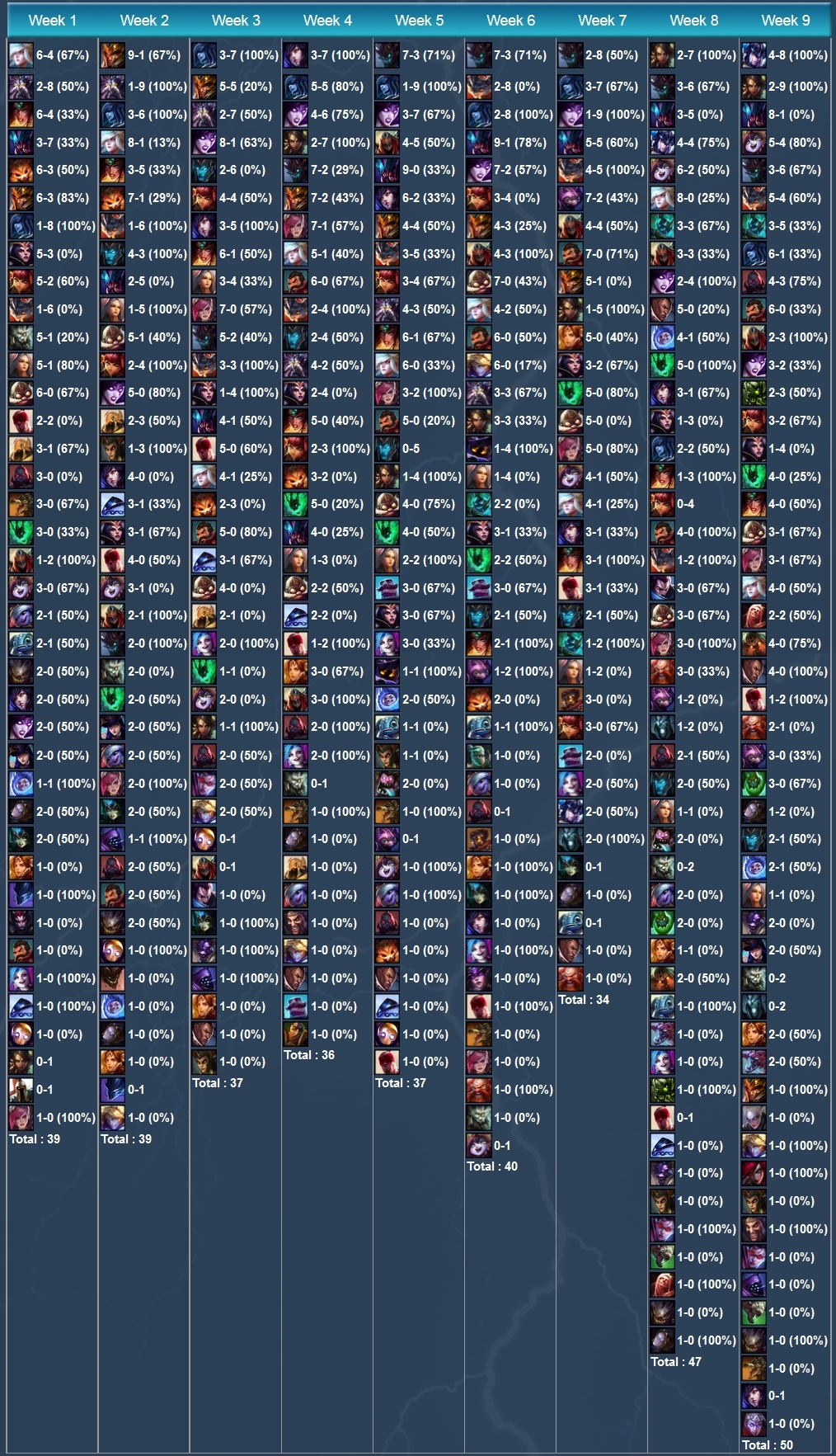 We saw a lot of changes in champions popularity during this LCS Spring split. I will try to explain some of them or just point out some flavor of the month or some difference between EU an NA…

Before starting with the numbers, I will introduce myself quickly, I’m the founder and webmaster of www.gamesoflegends.com, a website where you can browse a lot of stats about competitive tournament (LCS, LCK, LPL and International tournaments). It’s my  first article on goldper10.com and English is not my native language, so I apologize for my poor writing style.

First, start with the datas.

You can see the interactive table here :

How to read the numbers in this table: Picks – Bans (Winrate %). Champions are ordered by their presence (picks+bans).

Popular pick in week 1-2, the 5.3 nerf (week 5) completely remove the champion from the NA scene. We still saw some successful plays in EU. When we look at the winrate, it seems like NA toplaner are not Gnar players: 61% winrate in EU versus 24% in NA.

Not played in week 1-2 (4 games in 2 weeks), the champion is now a top pick. He didn’t receive any buff, but he may have benefits from the nerf of other top lane champion (Gnar).

Popular champions all the split in NA (as well as LCK and LPL).But only 22% presence in EU.

Jarvan used to be a must pick at the beginning of the split, but he nearly disappear in week 8 and 9. He even completely disappear from the jungle since he was played top or mid. With the small nerf he received in 5.4 patch (week 7) and the new jungler item of the 5.5 patch, players seems to favour others junglers (Sejuani/Nunu/Reksai/Nidalee or Vi in NA).

Vi was played alot in NA, but the champion is nearly inexistant in EU (32 vs 7 picks during all the split).

The remove of deathfire grasp in patch 5.2 (week 3) didn’t kill AP assassin. LeBlanc and Ahri still had a good presence after.

Typical exemple of champions not played after a nerf. With the 5.3 and 5.4 patches nerf, Kassadin and Azir loss the favour of the players. Their 5.5 buffs didn’t bring them back.

Graves was always popular in EU since the beginning of the split. But he only became popular in NA since week 3-4.

With the 5.5 patch and the tank meta, we saw more Kog’Maw picks (especially in EU) during week 8 and 9.

Nothing surprising for the support position : Janna, Thresh, Morgana and Annie have been here all the split.

Very present in the end of the split, Lulu was played in every lane. She was played more as a support in EU, and more as a Toplaner in NA.

The 5.5 patch bring more diversity in the picks and bans phase :

Patch notes have a huge impact on the competitive meta, but still there is some flavor of the month. We can see some champions having a strong presence one week and completely disappear the next week without any change (Kennen week 7 in NA for example), or some champions being played in NA and not in EU (Rumble).