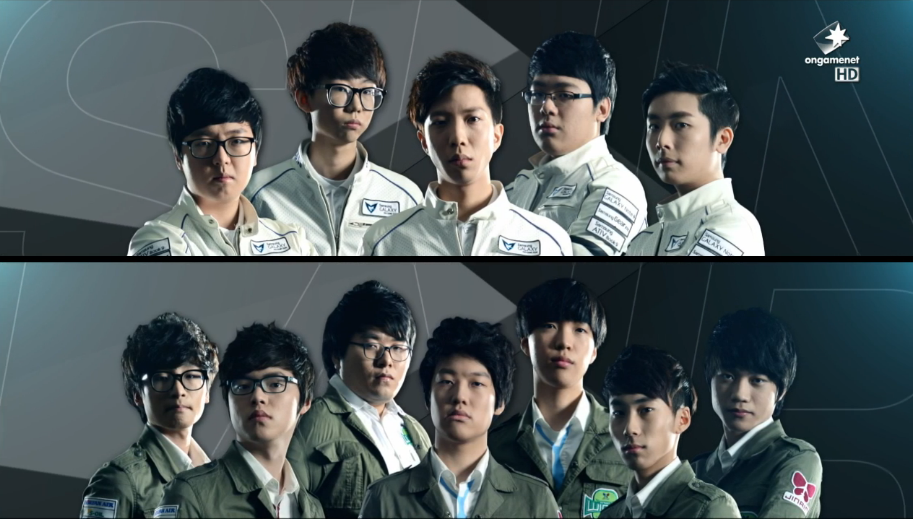 In the second best-of-three matchup, Samsung’s rookie roster looked to make a name for themselves by showing up against the seasoned veterans of Jin Air. Jin Air’s top laner, Yeon “TrAce” Chang-dong, needed to prove himself in the coming series, following his organization’s recent signing of Lee “Sky” Kyung-min, another potent top laner.

Game one began with Samsung, on the blue side, banning Azir, Xerath, and Lissandra against Jin Air’s Lee “GBM” Chang-suk. Jin Air targeted Kwon “Wraith” Ji-min with a Janna ban, before following up with Lee Sin and Gnar, both strong bans from red side. Samsung prioritized their early game by picking up Jarvan IV, which left Morgana and Corki open for Jin Air. Morgana fits in a unique role for Jin Air, especially, as she has appeared in all three lanes at one point or another in the preseason. Samsung safely chose their bot lane, as a result of Jin Air’s early flex pick, featuring a Lucian pick for the ever-aggressive Lee “Fury” Jin-yong. Finally, Jin Air sped up their composition, picking Lulu, Rengar, and Kassadin to round off a rather “clever draft for Jin Air,” as put by Christopher “MonteCristo” Mykles, the analyst on the English broadcast team. Samsung decided on Jayce and Rumble as their final picks, both strong in the current meta yet unproven on these particular solo laners.

The bot lane saw action even before minions started hitting each other, as Choi “Chei” Sun-ho wisely took a point in Tormented Soil to win a level one trade. Not only did the trade offer an early advantage to Jin Air in terms of

lane pressure, but Corki and Morgana were able to hit level two first, thus further snowballing their lead. However, the majority of this game was decided by the two junglers. Around four minutes in, Seo “Eve” Jun-cheol wrapped around the top lane tri-bush with Jarvan IV, blowing Kassadin’s Flash. Eve tried to take advantage of the vulnerable Kassadin by returning a couple of minutes later, only to find that his Flash was back up, thus giving Jin Air the opportunity to secure the first dragon of the game. Samsung really emphasized vision control this game, finishing two Sightstones before ten minutes and lining up four vision wards along the river before the second dragon spawned. Rengar had hit level six at this point, and finally utilized his stealth ultimate, forcing a teamfight that led to Jin Air taking the second dragon for themselves. Although Samsung controlled a large majority of the map during the early parts of the game, where their laners are usually much stronger, Lee “Chaser” Sang-hyun was able to heavily impact the remainder of the game with his well-timed ults, multiple times taking Samsung by surprise in order to secure objectives.

GBM’s Lulu play did not go unnoticed, however, as he was able to stack hundreds of AP and provide incredible boosts to both speed and power by buffing up the invisible Rengar. Samsung’s top laner, Lee “CuVee” Seong-jin, did not impress with his Rumble play outside of the laning phase, laying down poorly-positioned ultimates that provided neither damage nor zoning. Unfortunately for Samsung, TrAce played very well, both mechanically in the laning phase, and intellectually in the later stages of the game. When both teams were contesting an early dragon (taken by Jin Air), CuVee attempted to Teleport down to the fight, but TrAce flashed forward to cancel the channel with his Null Sphere, thus freeing himself to Teleport down and force a 5v4 fight. Later, Jin Air worked as a unit to push down the middle lane while TrAce pressured the top inhibitor, forcing the untested Samsung rookies to make tough macro decisions. From around 37 minutes in, when Jin Air took its first Baron, the combination of shields, split-pushing, and minions eventually became too much for Samsung, and Jin Air captured their first victory of the season.

As is customary in series, Jin Air and Samsung flipped sides, which changed up the pick/ban strategies quite a bit. Jin Air took Corki away from Fury and Morgana away from Park “BlisS” Jong-won, while banning Lissandra out as a courtesy. Samsung shoved Gnar, Xerath, and Azir from the available champion pool, leaving Janna available for

Chei. Samsung decided on Syndra and Lee Sin for their first rotation, both strong picks in the early game. Jin Air returned to Season 3 with Tristana, Renekton, and Orianna, while Samsung confused everybody with Fizz and Kassadin picks, thus deciding to throw Syndra into the bottom lane with Sivir.

Tristana naturally shoves her lane with Explosive Shot, generally giving her the early level two advantage. However, the combination of Sivir’s Ricochet and Syndra’s Dark Sphere pushed faster, thus giving Samsung the experience lead. Chaser came through the lane and got a quick kill on Fury before even completing his blue buff. Eve made his presence felt in the mid lane by taking GBM down, which might have been prevented or turned if TrAce’s Teleport had come in slightly earlier. The first real teamfight came around Samsung’s red buff, ending in a red buff, a dragon, and two kills for Jin Air. The gold lead Jin Air had accrued slowly dwindled, however, due to Samsung cleverly making picks in side lanes, until

it swung in favor of Samsung around 21 minutes, coincidentally around the spawn of the second dragon. The inevitable fight seemed it would be a fair 5v5, that is, until Wraith hit four champions with Scatter the Weak, immediately initiating a chaotic battle that left both teams walking away with two members, each heavily wounded. Samsung then proceeded to group in the top lane, attempting to get as far down the lane as possible, while the rest of Jin Air joined Tristana in pushing down the bottom lane towers. The initial trade of inner turrets with no opposition from either side prompted both death squads to continue moving forward, eventually leaving each team without an inhibitor. Samsung took a bold risk by rushing to kill the Baron, which succeeded briefly until Na “Pilot” Woo-hyung jumped around on Tristana to give Jin Air a 5-for-2 teamfight win and a chance to end the game alongside a large wave of super minions

coming from bot side. Unfortunately for Jin Air, and rather unluckily, actually, the downed inhibitor respawned as the Nexus was lower than 50% HP, forcing Jin Air out of Samsung’s base and turning the momentum back in Samsung’s favor. GBM got a double kill in a teamfight soon after, putting the ball back in Jin Air’s court, and opening the gates to end the game yet again. But Kassadin revives just in time to shut down Tristana, and maneuver around the rest of Jin Air to halt the push in the final moments of the Samsung Nexus. Jin Air tried to make a desperation play on the bottom inhibitor, but Pilot got blown up instantly, and GBM failed to do any real damage due to his accidental purchase of two Zhonya’s Hourglasses rather than investing in a Void Staff. Samsung gets the ace and the game.

It came down to a game three tiebreaker, funnily enough. Samsung probably should not have won Game Two, seeing as how the first game went, but things happen. Samsung took Azir, Xerath, and Lissandra out of the game, as expected. However, the Sivir ban out of Jin Air was rather odd compared to Janna and Gnar, their other two choices. Samsung locked in Kassadin for CuVee, which usually would act as a flex pick between top and mid, but BlisS is not known to play a great deal of the champion. The Kassadin pick opened up the opportunity for Jin Air to select Morgana and Corki, two of the team’s signature champions, which didn’t reveal a great deal about their team composition. Samsung chose comfort picks after a little deliberation, ending up with Lee Sin in the jungle, Fizz for

BlisS, and a Lucian/Lulu bot lane. Jin Air showed their hand a bit more by selecting Jarvan IV and Thresh, which nullified the possibility of Morgana falling into Chei’s hands, and rounded out their team with a nice, safe Orianna pick for GBM in the mid lane. TrAce has been known to play a rather substantial amount of top lane Morgana in solo queue, which has actually brought him some fame due to the rate at which he climbed the ladder in recent months. That being said, he should be much more familiar with the standard top lane matchups than CuVee would be on Kassadin, mainly because of how unique Morgana is to TrAce.

Chaser began his route with a bold, instinctive maneuver where he and TrAce walked into the blue side jungle from top lane and stole Eve’s Gromp monster, which set Lee Sin

so far behind that he could barely survive his own red buff, allowing Jarvan IV to take two blue buffs and his own red, thus building up a tremendous experience advantage early on. Eve was unable to pressure the map and make use of Lee Sin’s strong early ganking potential, giving Jin Air’s solo lanes a lot of freedom to harass and farm as they pleased. Once both junglers hit level six, they headed to bottom lane, where both top laners teleported down and a massive fight ensued, only to end up trading the supports. For quite some time afterward, every lane returned to farming passively, with junglers and supports maintaining vision around the dragon pit. Jin Air took down BlisS twice in the span of two minutes, but nothing more. From the level one invade, Jin Air took control of the entire top side of the jungle while simultaneously owning vision in the bottom side of the river, which both contributed to a slow, methodical series finale. Of the few

engagements that spanned the remaining fifteen minutes of the match, only one was truly memorable. When all seemed lost for Samsung, with Jin Air pushing down the bottom inhibitor turret, Eve managed to connect a Sonic Wave with Chei’s Thresh, taking it only to jump into the back line of Jin Air and kick four people into the air, stacked perfectly with Wraith’s Wild Growth knock-up to lock down the majority of Jin Air’s roster in a valiant final effort. However, Jin Air was able to turn the fight and end the game shortly after, ending the series with a 2-1 victory over the solo queue stars of Samsung.